When I was 10, I visited the Empire State Building on a family trip.

My cousins and I stood in line with matching plastic pink purses from Macy’s that screamed “New York” in varying fonts. I didn’t know much about the city at the time, but I sure knew what the Empire State Building was.

After a wait that seemed like forever, we rode the elevator up. I was in awe of the view. Then we went back down and continued our New York visit.

On Thursday, almost 15 years later, I revisited the Empire State Building to preview its newly renovated 102nd floor observatory, which will open to the public Saturday.

The visit was no longer just a queue and a view but an experience.

Visitors can see see Manhattan at a vantage point of 1,250 feet on the 102nd floor.

Though the 102nd floor observatory is one of the final phases of a renovation project that began more than four years ago, Tom Hennes, principal and founder of Thinc Design and lead experience designer on the renovations, said that it was one of the first things his team considered when starting off.

Hennes said that they stripped the observatory of everything nonessential. The observatory windows used to be obstructed by waist-high air conditioning units, but now features floor-to-ceiling glass windows with minimal obstruction.

As guests make their way up through the building, they learn about its place in the city, its history and cultural impact through exhibits. But when you reach the 102nd floor, Hennes said that any thoughts unrelated to the spectacular view should simply fall away.

One of the biggest changes throughout the building is the lack of lines.

“Do you see any queuing?” Jean-Yves Ghazi, president of ESRT Observatory TRS, asked media as he led them on a tour. “No,” was the answer. There are only lines at what he called “choke points,” such as leading into the elevator or going to the external deck on the 86th floor.

“We often hear people saying ‘where’s the line to the elevator?’ when they’ve just arrived,” said Hennes. “Because it’s all fun, it’s not a wait anymore.”

For a little more than four years, the $165 million renovation of the Empire State Building has been ongoing.

The project began with the premise that people have what Hennes called an “almost mythic conception” of the building. The aim has been to add to the majesty of the building — what it means to people as an icon of New York City.

The renovations are visible from the bottom up, starting in the building’s entryway, which was previously tenant space. Now, guests are greeted in a proper lobby, featuring a mosaic of the Empire State Building.

From there, visitors progress to a grand staircase featuring a model of the building on their way to the second floor, which was turned into a 10,000-square-foot immersive exhibit. It opened to the public in July. 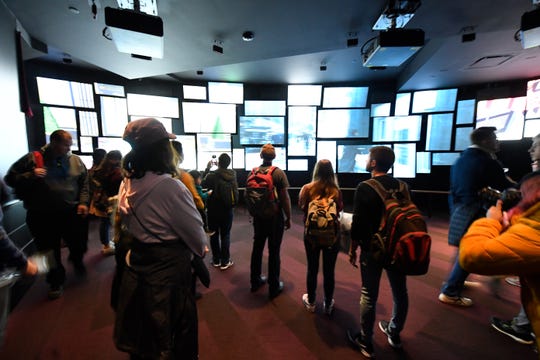 Floor two tells the story of the icon over time. It begins with construction of the Empire State Building in 1930, progresses to its opening in 1931 and continues with relics from different decades. The building’s incorporation into pop culture is also represented — and yes, that does includes “King Kong” and “Elf” in a cinematic walk-through on the second floor.

After perusing exhibits, guests begin the long ascent to the 86th floor open-air observatory in an elevator with a movie-screen ceiling that shows a video making you feel as though you’re under the construction of the building as its happening.

The 86th floor, with features an external deck that wraps around the building’s spire was refurbished to improve guests’ viewing experience but remained open through construction.

After making a transfer at the 86th floor, guests can enter another elevator, this one with glass walls, and visitors can come close to the 103-story building’s highest point: the 102nd floor observatory.

The final phase of renovations includes the 80th floor, which will also be an exhibition space, Hennes said. It should be complete by the end of November. 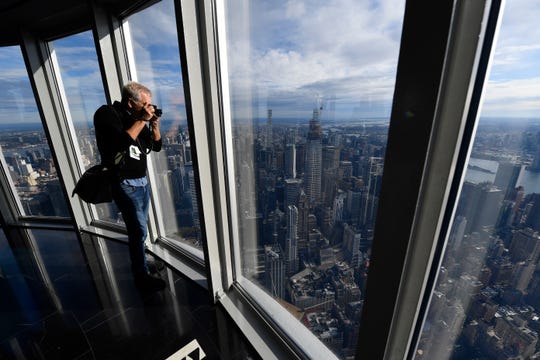 A member of the media snaps a picture of the New York City skyline from the 102nd floor of the Empire State Building.  (Photo: Robert Deutsch, USA TODAY )

Ahead of the event, I expected to look down 102 stories and feel floored. But I experienced more than that.

I learned about the history of the building, what has come in and out of it and what it represents — with a panoramic view of New York City to top it all off.

A goal of the renovation was to strengthen the connection between the visitor and the historic icon, and for me, it worked.

“I love this building. I came here when I was 7, and it never left me. I always had a deep affection for it,” said Hennes. “For me this has been about making it everything it could possibly be for millions of people per year.”

A standard ticket costs $38 for adults, $32 for children and $36 for seniors and offers guests the option to go to the 86th floor while an extra $20 can take guests to the 102nd floor observatory. Other ticket packages such as express tickets, which allow guests to skip the line, are also available for purchase.

More: The world’s tallest buildings aren’t being built in the USA anymore