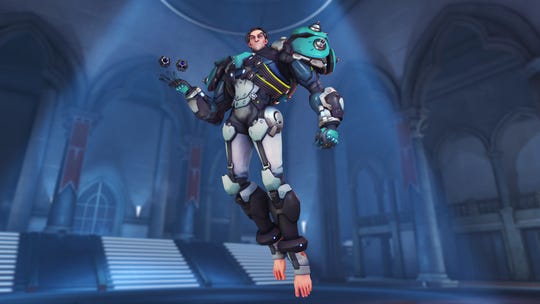 Sigma is described by Blizzard as “an eccentric astrophysicist who hopes to unlock the secrets of the universe, unaware that he is being used as a living weapon.” (Photo: Activision Blizzard)

A new hero is joining the fight in “Overwatch.”

On Monday, Activision Blizzard confirmed the first-person shooter’s 31st hero, named Sigma. He will become available to play Tuesday on the game’s Public Test Region (PTR), used to test out characters or features ahead of public release on PCs and consoles.

Sigma becomes the second hero unveiled in “Overwatch” this year. Last spring, Blizzard rolled out Baptiste, a healer who could fire projectiles similar to a grenade launcher to lob boosts of health to teammates.

So what can we expect from Sigma, and how could it impact the overall game experience in “Overwatch?” Here’s everything you need to know:

According to Blizzard, Sigma is “an eccentric astrophysicist who hopes to unlock the secrets of the universe, unaware that he is being used as a living weapon.” He is described as a scientist who gained the ability to manipulate gravity after a faulty experiment. He is 62 years old, and from The Netherlands.

Sigma is the 31st hero in the video game Overwatch. (Photo: Activision Blizzard)

Introducing Sigma – an eccentric astrophysicist who hopes to unlock the secrets of the universe, unaware that he is being used as a living weapon. pic.twitter.com/Oi3or2VthQ

What can he do?

Here’s the breakdown of Sigma’s powers, according to Blizzard:

Experimental Barrier. Sigma propels a floating barrier to a location of his choosing. He can recall the barrier at any time.

Accretion. Sigma gathers a mass of debris and flings it at an enemy to knock them down.

Gravitic Flux (Ultimate). Sigma manipulates gravity to lift nearby enemies into the air and slam them back down.

How will Sigma fit in?

He gives “Overwatch” another main tank with an interesting set of abilities ahead of the launch of role queue, a feature where players will lock in to their preferred role (Tank, Damage, Healer) before the match starts.

Game Director Jeff Kaplan gives an in-depth look at Overwatch’s new Role Queue system, which allows players to select their role before the match even begins.

Experimental Barrier could prove useful assisting teammates who are a bit further from the action. Based on the early stream of Sigma in action, the barrier can handle up to 1,500 in damage. It works similarly to Reinhardt where it restores health when it’s not being used. The big difference is you can place it anywhere.

Accretion potentially offers one more option for slowing down a more elusive enemy like Tracer or Sombra.

The most interesting ability here is Kinetic Grasp, which allows Sigma to absorb any damage and add it to their shield. It’s very powerful, judging by the longer cooldown to use it again, but could be interesting when using against an ultimate ability, for example. Sigma and Orisa or Reinhardt together could make it really challenging to penetrate through with all the shields and barriers.

When can I try him out?

Typically, players wait about a week after a character is in the PTR to try him live. Sigma will likely start out as an option for Quick Play and Arcade before moving to Competitive in the coming weeks.

We will update this page as we learn more information.

'Jurassic World - The Ride': True stars are the roaming dinosaurs