Murder charges have been filed against a woman and her daughter in the death of a pregnant Chicago woman whose baby was cut from her womb. (May 16)
AP, AP

A newborn boy has opened his eyes for the first time after he was cut from his mother’s womb when she was killed in Chicago last month, according to reports.

The newborn infant of murdered 19-year-old Marlen Ochoa-Lopez was initially not expected to survive, but he is now in critical condition and on life support, according to ABC News. The baby, named Yovany Yadiel Lopez, first opened his eyes on Sunday during a visit from his father, Yovany Lopez, and his 3-year-old brother, the network reported.

“He has opened his eyes,” Julie Contreras, a spokeswoman for Ochoa-Lopez’s family, told ABC. “He seems to be a fighter.”

Ochoa-Lopez was killed on April 23 after being lured into the home where Clarisa Figueroa lived with her 24-year-old daughter, Desiree, by Facebook posts offering free baby clothes, according to court documents. While her daughter distracted Ochoa-Lopez with a photo album, Clarisa Figueroa, 46 wrapped a cable around the pregnant teenager’s neck and strangled her. 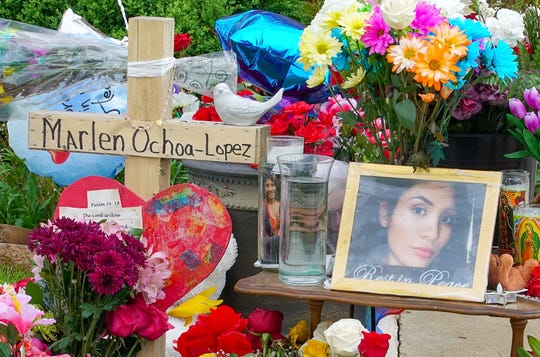 A memorial of flowers, balloons, a cross and photo of victim Marlen Ochoa-Lopez, are displayed on the lawn, Friday, May 17, 2019 in Chicago, outside the home where Ochoa-Lopez was murdered last month. Assistant State’s Attorney James Murphy says a pregnant Ochoa-Lopez, who was killed and whose baby was cut from her womb, was strangled while being shown a photo album of the late son and brother of her attackers. (AP Photo/Teresa Crawford) ORG XMIT: RPTC104 (Photo: Teresa Crawford, AP)

She then cut open Ochoa-Lopez with a butcher’s knife and removed the placenta and the baby. After disposing of the body, Figueroa called 911 and claimed she had just delivered her own baby and that it was not breathing.

When she arrived at the Christ Medical Center in Oak Lawn covered in blood later determined to belong to Ochoa-Lopez, doctors who examined her found “no signs consistent with a woman who had just delivered a baby.”

Ochoa-Lopez was reported missing the next day, but police did not connect her disappearance to the 911 call about the baby until May 7, when friends of the teen directed detectives to her social media account that showed she had communicated with Clarisa Figueroa.

Police have since arrested and charged Figueroa and her daughter with murder and aggravated battery of a child. Clarisa Figueroa’s boyfriend, Piotr Bobak, has been charged with concealing the death of a person and concealing a homicidal death.

This combination of pictures created on May 16, 2019 shows this handout mugshot obtained courtesy of the Chicago Police Department on May 16, 2019, shows the booking photo of Clarisa Figueroa, Desiree Figueroa, and Piotr Bobak. (Photo: HO, AFP/Getty Images)

State law requires physicians and other hospital personnel who suspect child neglect or abuse to report their suspicions.

“Our top priority is to provide the safest and highest quality care for the patients and communities we serve,” the hospital said. “Out of respect for patient privacy and in compliance with federal and state regulations, we are unable to provide comment. We continue to cooperate with local authorities.”