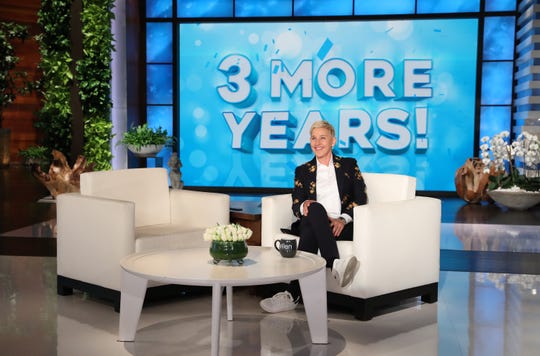 The extension of “Ellen,” now in its 16th season, will keep be the popular syndicated talk show on TV through 2022. The show had previously been renewed through the 2019-20 TV season.

The host decided to share the news with those likely to appreciate it the most: her studio audience.

“I’m excited to announce that I’ll be doing my show for three more years,” DeGeneres announced during the taping of an episode that will air Wednesday. “Mostly because I love doing it so much every day, but also because that takes me to the end of my car lease.”

She also tweeted out the news: “Doing this show has been the ride of my life.”

An executive from the studio that produces “Ellen” and some of DeGeneres’ other starring and producing projects, including “Ellen’s Game of Games” and “Little Big Shots,” praised the host.

“Ellen is, quite simply, a force of nature,” Warner Bros. Television Group president Peter Roth said in a statement. “Her energy, intelligence, kindness and creativity know no bounds. Whether it’s her instant connection to her guests on her flagship talk show, her warm and funny hosting on ‘Game of Games,’ or the infectious enthusiasm she shares in producing everything from ‘Little Big Shots’ to the animated antics of ‘Green Eggs and Ham,’ it’s an honor to work alongside her.”

Doing this show has been the ride of my life. pic.twitter.com/Mytkjxj4xa

DeGeneres also recently returned to stand-up comedy after a 15-year break, with her Netflix special “Relatable.”

“Ellen” has won 63 Daytime Emmys since it premiered in 2003, including 11 for outstanding entertainment talk show, a record for that category.