Lena Dunham was hospitalized Saturday to undergo surgery for the rupture. In February, she told fans she suffers from endometriosis.
USA TODAY

Lena Dunham’s attempt to embrace her chronic illness with new ink has left many fans who battle similar ailments questioning the message it sends.

The creator of HBO’s “Girls,” 32, who has been open about her battle with endometriosis, permanently labeled herself “sick” with a lasso font tattoo on the back of her neck.

“Sometimes the thing you’re most scared of being called is the best thing you can call yourself,” Dunham captioned an Instagram post debuting the new ink Wednesday. “Thank you @havenstudiobk for labeling me… and to my sisters in this dizzying but starry slog- i am lasso’d to you!”

Related: Lena Dunham opens up about romance with Jack Antonoff, rumors he dated BFF Lorde after her

Although Dunham received support from fellow actress Kat Dennings (“Reclaim dat!) and fans who reminded her that “sick is (Australian) slang for cool or excellent,” many followers with chronic illnesses reminded her that she’s “way MORE than” sick.

“I think this is quiet regressive. As someone who lives with chronic illnesses I would never physically label myself as synonymous with that word,” user @ellalalou wrote. “I never saw you with that label before – only the strength of being you despite illness. Just like me. You sticking that word behind your head also sticks it behind mine.”

Instagram user @baronessvonriphoven added: “Why are you a victim mindset? I have chronic Lyme – I’m not.”

“I have arthritis. I have fibromyalgia. I have endometriosis (I had a hysterectomy 2 years ago because of it). But would I label myself ‘sick’? No,” user @mollyannewalsh said. “I am not what happened to me. I am what I become. Move on, Lena. Move. On.”

That comment elicited a response from Dunham, writing, “There’s so much judgement in this comment. Aren’t I allowed to feel the pleasure in owning a phrase that has often been used negatively?”

Related: Spielberg asked Lena Dunham to adapt a Syrian refugee story and Twitter is NOT on board 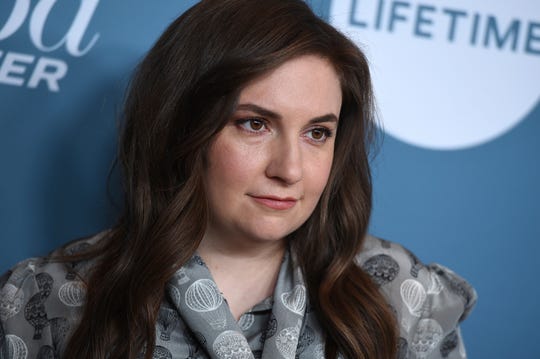 Lena Dunham debuted her new ‘Sick’ tattoo Wednesday, saying on Instagram: “Sometimes the thing you’re most scared of being called is the best thing you can call yourself.” (Photo: Jordan Strauss, Invision/AP)

Dunham had a total hysterectomy, which removes a woman’s cervix and uterus, in November 2017 to relieve severe pain caused by her endometriosis, a disorder where tissue that normally lines the uterus grows outside the uterus, according to Mayo Clinic.

She has had 12 surgeries related to the disorder, including a procedure in October to remove her left ovary.

“Anyone who knows me (or knows *of* me) equates me with 2 things: nudity and pelvic pain. I’ll take it if it lets me spread the good word,” she wrote in a Instagram post Saturday, showcasing her surgery scars.

She continued: “I’m dating & connecting my scars from 12 surgeries as part of my endo sister @georgiewileman’s campaign #thisisendometriosis (March is endometriosis awareness month) to raise awareness of endometriosis and the multiple surgeries that are performed every year to try and ease the symptoms of an incurable disease that effects roughly 1 out of 10 women, yet is so often ignored or dismissed as a mental health issue (uh yeah, when you ignore our pain it sure becomes one!) Let’s make some noise this coming bikini season.”