SportsPulse: The Spartans shocked Zion Williamson and the Duke Blue Devils with their thrilling upset. USA TODAY’s Jeff Zillgitt believes how they did it is a recipe to win it all in Minnesota.
USA TODAY

WASHINGTON — He called a timeout like he always does, his team down a point in the dwindling seconds of as good a NCAA tournament game as you’ll ever see.

Here was Tom Izzo’s shot to finally beat Duke and Mike Krzyzewski, and he wasn’t leaving it to chance.

So when MSU’s Kenny Goins grabbed the rebound after a missed jumper by Duke’s R.J. Barrett, the 64-year-old coach summoned his guys to the bench Sunday afternoon inside Capital One Arena.

Then Izzo did what he has never gotten enough credit for: draw up a play to get an open shot.

Eleven seconds later, the crowd roaring, the tension rising, Izzo watched his team set up the shot of Goins’ career. 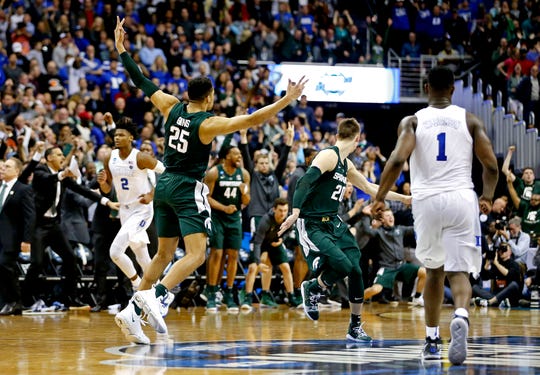 Michigan State Spartans forward Kenny Goins (25) reacts after the go-ahead three-pointer against the Duke Blue Devils in the championship game of the east regional of the 2019 NCAA Tournament at Capital One Arena, March 31, 2019. (Photo: Amber Searls, USA TODAY Sports)

Cassius Winston took the inbound pass, dribbled to his right and dumped it Tillman. On the left side, Goins ran to the top of the key. Tillman threw it to him.

Goins let it fly, a former walk-on, a fifth-year senior, the wise old soul of the locker room who’d been hitting timely shots all season.

All the Spartans had to do was get a stop and a rebound. They got the first. Let the rebound slip away. Got one more stop. Then had to inbound the ball with four seconds left. Winston slipped away from the defense, took the pass, dribbled out the clock, and heaved it to the rafters.

Back to the Final Four. Afterthe thrilling, 68-67 win over Duke.

The team sprinted to mid-court and mobbed each other. All they did was fell the tournament’s No-1 seed, topple a legend, and likely end the college career of Zion Williamson, the high-watt star whose spectacular brilliance overshadowed the season.

Well, not anymore. These Spartans made sure of that. Harassing Williamson all game, forcing him into turnovers and silly fouls and, in the end, helplessness. This team has been doing that to other teams’ stars all winter.

Doing it in ways that surprised even Izzo. For this is a different kind of team, and Izzo’s never had one quite like it.

Not this skilled. Not this together and connected on the court.

That his Spartans would be here, on this stage, a Final Four trip at stake, exchanging daggers with the sport’s most iconic program and coach?

Yeah, maybe Izzo dreamt of it back in September when practice started. But whatever vision he had didn’t include the version of the team that took the floor Sunday afternoon in the nation’s capital.

No Joshua Langford? No Kyle Ahrens? A limited Nick Ward? A point guard who had to play every minute of the game?

There was Winston, calling for screen after screen, slipping around his big guys, probing, searching for a crease, waiting, sometimes until a few seconds remained on the shot clock, then lifting a soft floater over all that athleticism waiting in the paint. 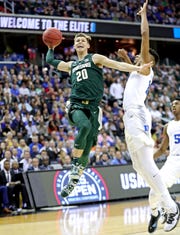 There was Tillman, bottling up Williamson just enough, muscling the Duke star right back, surviving his own foul trouble in the second half, setting devastating screens for Winston, often slipping them to the basket and dunking.

There was Aaron Henry, getting into Barrett, bothering the Blue Devils’ other top-5 pick. There was Matt McQuaid, the other senior, hammer dunking early in the game, holding the ball back like Kobe Bryant, banging it over the Blue Devils’ center, Javin DeLaurier.

If he’d ever jumped higher, he shouldn’t admit. The dunk announced that MSU had some athletes, too.

MARCH MADNESS: Was this the best Elite Eight weekend ever?

And whatever adrenaline shot through McQuaid’s legs early, when he struggled to shoot early, surely helped him on the rim attack.

For a minute in the first half, when Duke’s youngsters started acting like NBA vets, it looked like MSU might wobble. It fell down by nine.

Then Winston, the region’s most outstanding player, scored four in the lane. Tillman hit a 3-pointer — yes, a 3-pointer. Winston hit a jumper. Winston found Tillman after faking out Barrett on the break.

A sleight-of-hand from the junior point guard, who was, at times, the best player on the floor.

Think about that for a moment. About this team. About the sum of its parts. About the 11-0 run to end the first half after Duke jumped them. About that response, the kind of response they’ve shown all season.

Then think about this coach. A year ago walking out of Little Caesars Arena after a second-round loss to Syracuse. Some wondering if the game was passing him.

Well, how was this for an answer? 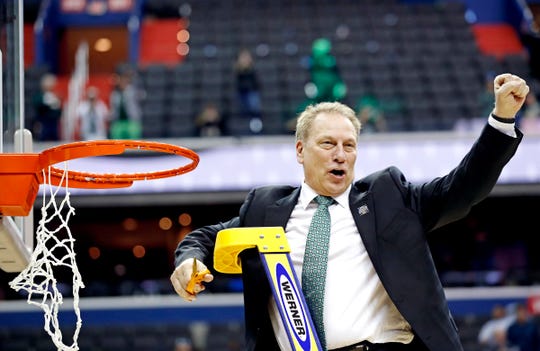 All Izzo did was revamp his offense in the summer, re-up his commitment to locker-room chemistry, and roll out the most enjoyable, egoless team he’s had.

They beat Duke because they have talent, sure. Don’t forget that. But they are here, on their way to Minneapolis for the Final Four next week because of a silky and unorthodox point guard, a big man who stepped into the starting lineup and didn’t look back, a couple of clutch seniors, and a Hall of Fame coach who wanted to change.

Then followed up his toughest year with his most rewarding.

Izzo beat Coach K. After drawing up the play of the year.