SportsPulse: It went down to the buzzer again for Duke, but the Blue Devils survive and advance. USA TODAY’s Jeff Zillgitt breaks down how they did it and looks ahead to their Elite Eight matchup with Michigan State.
USA TODAY

Five-time national championship coach Mike Krzyzewski has one of his most talented teams he’s ever piloted this season, with a freshmen-laden roster that features two national player of the year-caliber players in Zion Williamson and R.J. Barrett.

Near-upsets to Virginia Tech and Central Florida in the last two rounds raise questions whether this year’s No. 1 overall seed merits being the national title favorite. As Krzyzewski noted after the UCF win, he’s been both “lucky” and “unlucky” in the single-elimination NCAA tournament. Some of his Duke teams under-performed their potential (like the 2002 Sweet 16 team) while others surpassed their potential (like the 2010 national title winner).

Here’s a look at the top 10 Duke teams in Coach K’s tenure, including the 2018-19 team that just advanced to the Elite Eight.

1. 1991-92 (34-2, national champions). This isn’t just one of the best Duke teams ever, it’s one of the best in NCAA history. The starting lineup – Bobby Hurley, Grant Hill, Thomas Hill, Brian Davis and Christian Laettner – was loaded and each averaged double figures. In a day and age where staying in college was the norm, this veteran-laden Blue Devils squad defeated opponents by an average of 15.4 points a game and shot 54% from the field. The only two losses were by 2 at North Carolina and by 4 at Wake Forest. Hurley broke his foot in the loss to the Tar Heels and did not play against the Demon Deacons. Duke beat Michigan’s Fab Five by 20 points to repeat as national champions. But not before Laettner hit one of the great shots in basketball history to beat Kentucky and send the team to the Final Four.

2. 1990-91 (32-7, national champions). A close call to be No. 1. This Duke team’s upset of UNLV in the Final Four is one of the most memorable in college basketball history, as it snapped the Larry Johnson-led Runnin’ Rebels’ 45-game winning streak. Having lost to UNLV by 30 points in the previous year’s title game, this roster added a freshman Grant Hill and saw Hurley as a sophomore and Laettner as a junior. The team went on to beat Kansas in the title game.

ZION’S READY: Duke needs domination from its star. He’s up for the challenge

BOILERS UP: Why this run to the Elite Eight is so sweet to Purdue

3. 1985-86 (37-3, national runner-up). The Blue Devils reached the Final Four three times in the 1980s which started a run of more than 30 years as one of the nation’s top programs. This 37-win team was the first and best of them, winning the ACC regular-season and tournament titles before losing to Louisville in the national championship game. The roster featured a bunch of standouts still familiar to people today — Johnny Dawkins, Tommy Amaker, Jay Bilas and Danny Ferry.

4. 1998-99 (37-2, national runner-up). A top five of Shane Battier, William Avery, Elton Brand, Trajan Langdon and Corey Maggette entered the national championship game on a 32-game win streak, including a perfect run through their Atlantic Coast Conference schedule (only loss was to Cincinnati). But the Blue Devils ended as one of the best team not to with a championship as a Connecticut team led by Rip Hamilton and Khalid El-Amin rallied after halftime to give coach Jim Calhoun his first title.

5. 2000-01 (35-4, national champions). Somehow, Carlos Boozer ended up becoming the best pro from this team. But the two best players were Jay Williams and Shane Battier. Then factor in sold point guard Chris Duhon and crafty marksmen Mike Dunleavy Jr. and you’ve got one of the best offenses in college basketball history, averaging 90.7 points a game. Battier won the Wooden Award that year, but this season was when Williams started to fully blossom. The Blue Devils staged a memorable comeback against Maryland in the Final Four and then fended off a tough Arizona team led by Richard Jefferson and Gilbert Arenas to claim the title.

6. 2018-19 (32-5, Elite Eight, pending). Freshmen Zion Williamson and R.J. Barrett are Coach K’s best tandem in the last decade, and give Laettner and Hurley and Battier and Williams a run for their money. But the reason for their high ranking isn’t talent alone — which equates to the top two projected picks in June’s NBA draft. It’s because of how well they gel together and make every player on the roster better. Cam Reddish, while a streaky shooter, is a strong third option and Tre Jones, while an inferior shooter, “stirs the drink” as Krzyzewski told reporters in February. 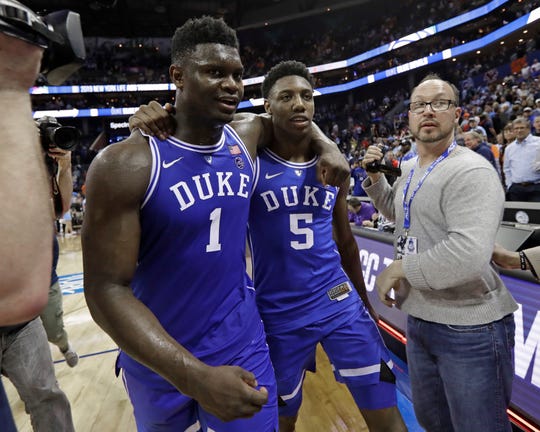 7. 2001-02 (31-4, Sweet 16). Duke seemed destined to go back-to-back, but the best teams don’t always win the title and that was proven by the 2002 Blue Devils. Jay Williams, Carlos Boozer, Mike Dunleavy, Dahntay Jones and Chris Duhon were the top players of a team expected to possibly face ACC rival Maryland for the national title after they splint games in the regular season. But Duke collapsed against Indiana, blowing a 17-point lead and failing to tied or win the game in the final seconds when Williams missed a free throw. Boozer missed the putback and what should have been a dream season in Durham turned into a nightmare finish.

8. 2014-15 (35-4, national champions). For as many talented players that Coach K landed in the one-and-done era — Kyrie Irving, Austin Rivers, Jabari Parker — this was one of his best. Big man Jahlil Okafor was the ACC player of the year as a freshman and had a supporting cast of Justise Winslow and also Tyus Jones, who played like an upperclassman with backcourt veteran Quinn Cook. This was also when a then-freshman Grayson Allen was introduced to the college basketball. His unexpected 16 points off the bench in the title game were credited as the difference-maker. 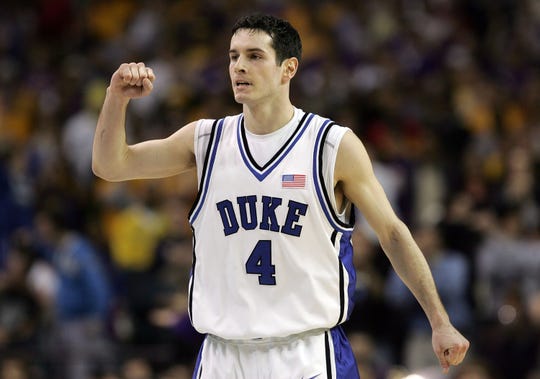 9. 2003-04 (31-6, Final Four). With a sophomore J.J. Redick and freshman Luol Deng the top players on this team, the Blue Devils finished the year 13-3 in the ACC, but entered the tournament with four losses in their last 10 games. They rediscovered their mojo and cruised to the Final Four, before coughing up a five-point lead with Connecticut’s Emeka Okafor taking over with 12 consecutive points for a two-point win. The supporting cast of Shelden Williams and Chris Duhon made this one of Coach K’s best.

10. 2009-10 (35-5, national champions). For all the great Duke teams that underachieved, this group surely overachieved. Jon Scheyer had his best season as a senior when he led the nation in assist-to-turnover ratio. Kyle Singler and Nolan Smith were standout juniors, and Lance Thomas, Brian Zoubek and Mason Plumlee were role players. The Blue Devils benefited from being the lone No. 1 seed in the Final Four and beat Butler in a close final.

Rock and Roll Hall of Fame 2019 ceremony: Everything you missed