AUSTIN, Texas – One day this past fall at Wooten Elementary, a low-income school north of this city’s trendy downtown, a school staff member was approached by a stricken mother.

The woman’s husband had just been deported. Without his income, she couldn’t afford the current apartment for her and the kids. She needed to downsize quickly. Could Bernardo Martinez, Wooten’s full-time parent liaison, help her?

Knowing the ripples of disruption that hasty residential moves can bring to students’ lives, Martinez quickly brought the mother into his office. Then he pulled up a new website custom-built for the Austin Independent School District that showed all the rental properties within Wooten’s attendance zone – as well as current vacancies and rent prices. 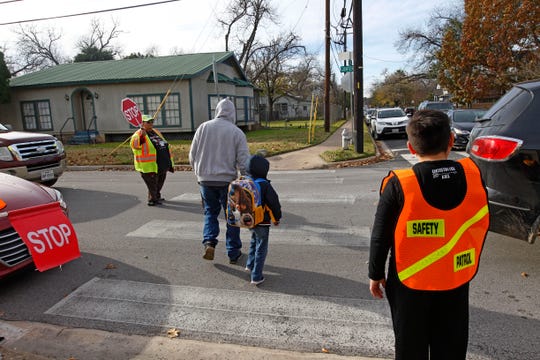 Within minutes, the mother had three names of landlords to contact.

With legions of young professionals moving to Austin for its music and tech scene, the city’s rent prices are soaring – and pushing out the lowest-income families.

As those parents move in search of cheaper rent, they often have to enroll their children in new schools. The resulting student turnover leads to more absences, lower academic performance, a higher likelihood of behavioral outbursts and weaker connections to school staff.

Almost one in five students in Austin switch schools in the middle of the year, state figures show. Worse, most of the churn is happening at schools that are already struggling. Research shows the instability also harms the progress of kids who stay put, probably because teachers must repeat material.

This pattern plays out in urban districts across the nation, especially in cities with high poverty, a high cost of living or lots of school choice – or some combination of all three.

But Austin is one of the nation’s only districts employing a comprehensive approach to stemming turnover. In the past two years, the district has trained key staff members at all schools on how to help parents search for nearby affordable housing so that a residential move doesn’t also become a school switch in the middle of the academic year.

“This is a way to provide more stability for our families,” said Austin Superintendent Paul Cruz. “We’re not sending parents to multiple places for housing information. It’s basically, we’ll help you locate a place and say how much it’s going to cost you and this is what the deposit is – it’s almost like a prescreening.”

The experiences of families in schools like Wooten is far removed from what most visitors associate with downtown Austin.

The city is a blue island in a red state with mild winters and abundant live music, beer and barbecue. In March, more than 200,000 people overcrowded Austin’s hip bars, clubs and other venues for the annual South by Southwest music festival and conferences.

The city’s appeal has added new pressures in the metro area. In 2017, an average of 151 people moved to the metro area each day, U.S. Census Bureau figures show. Roads and highways weren’t designed for that many people; on some days the congestion rivals that of Los Angeles.

The popularity has driven up rent prices and driven development in areas that have historically remained low-income and affordable for immigrants and minority populations.

According to the website Apartment List, Austin’s rent prices have increased by more than 3 percent over the last year, about three times faster than the Texas or national average.

In fact, rents have grown faster in Austin recently than in cities with more expensive rent overall, such as San Francisco, New York and Seattle, the website showed.

“Affordable housing is one of the biggest issues we have,” said Geronimo Rodriguez, president of the Austin school board and chief advocacy officer at Seton Healthcare Family.

“We have a city where about 150 people are coming in every day, and we are also losing about 1,000 students per year” whose families can no longer afford the city, he added. 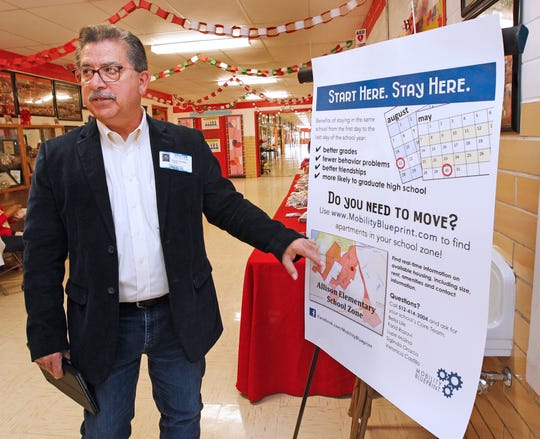 Doyle Valdez, a founder of Mobility Blueprint in Austin, Texas, points out the haphazardly drawn attendance boundaries for schools in the Austin Independent School District. The red on the map is the boundary for Allison Elementary School. The poster displayed at the school advertises Mobility Blueprint, a website that helps families locate affordable housing to help schools reduce student turnover. (Photo: Angela Peterson/Milwaukee Journal Sentinel)

Texas schools receive part of their state aid based on student attendance, so every day a child is absent means a lost aid payment as well as a lost day of learning.

“One of the things we found is that when a family moves their children, they typically lose six days of academic time,” said Doyle Valdez, a former president of the Austin school board.

“Over time, that really adds up for our families.”

Valdez, a lifelong Austin resident, has a day job in the oil and gas industry. But he’s also the co-founder of the new website and training program for Austin’s school staff that aims to help families find affordable housing and reduce student turnover.

“This is one of the most pernicious problems facing school districts all over the country: New York, San Diego, Portland, Milwaukee,” Valdez said. “Educators have known for a long time that student mobility is a problem, but they’ve said they can’t do anything about it.”

Valdez left the school board. But he remained interested in how to solve the problem of enrollment instability. He looked around the country for models that were working and couldn’t find any, he said. So he decided to build something himself.

He started by calling a friend from childhood, Rafael Childress, who works in web development and startups. As boys growing up in Austin, their mothers worked together as seamstresses.

Valdez explained to Childress how repeatedly switching schools is more harmful to a child’s academics than staying at one good school until it’s time to advance. Valdez then pitched his idea: What if they built a website that combined all the necessary data on housing and schools and school boundaries and then trained educators on how to help parents use the information?

Valdez didn’t think they could stop parents from moving. But he thought they could influence where they moved by promoting the availability of other affordable residences close to their current schools.

Charter schools: Betsy DeVos calls for more charter schools even as they spark investigations across the country

A big problem in Austin is that attendance boundaries are drawn so haphazardly that it’s easy for parents to move just a few blocks and inadvertently put themselves in the attendance zone of a different school.

The website, called Mobility Blueprint, is effective in its simplicity: It scrapes real-time information on apartments and duplexes available for rent, as well as vacancies, square footage and amenities, plus landlord contact information, and overlays it all on a map of the attendance zone for each school run by the Austin school district.

The site notes the apartments that rent at below-market rates. It also lists each school’s features and programs and contact information, as well as corresponding feeder schools. It does not map out the location of charter schools, however, because those schools operate independent of the district.

“A key part of this is creating a philosophical change that has school staff saying to families: You’re important to us. We’re family. We want you to stay at this school and within our system of feeder schools, and we’re demonstrating this by offering you this tool that can help you find cheaper housing and still stay connected to us,” Valdez said.

How to train staff and parents

Austin trained staff in 18 schools on how to use Mobility Blueprint in the 2015-’16 school year. It expanded the training and advertised the website to all 130 schools last year and this year.

The website gets between 1,200 and 1,600 hits per month, Valdez said. One of the early adopters was Allison Elementary, a low-income school in the city’s gentrifying Montropolis neighborhood.

According to state data, the school had about 18 percent student turnover in 2014-’15. That rate dropped to about 16 percent in 2015-’16, the year staff started teaching parents how to use the site to find housing.

The school met state standards in English and math and academic progress each year, so it’s hard to tell how much the reduction in turnover improved academic performance.

But Allison’s principal, Lupe Molina, said she thinks parents have noticed staff members putting more effort into helping them navigate housing challenges and that they’re more connected to the school as a result.

“One of the challenges our families have is the ability to scout the areas in which they live,” Molina said. “Some are moving from far away, some have two or three jobs, some have a hard time because of the language barrier.”

The new website is a “one-stop shop for all the information they need,” she added.

Sherri Davis, a parent at Allison Elementary, attended an information session about the website one morning in December in the school’s cafeteria.

Davis is raising two girls, ages 5 and 6, and was living in an apartment nearby with the help of a support check from the federal government. She said she’d like to move to a house with a yard where her girls could play right outside the door.

“I have to get on the website and look for what duplexes might be available,” she said.

A recent search on the website for housing near Allison mapped out four apartment complexes. Two didn’t list any information, but the other two noted the availability of income-restricted units. Both of those complexes had vacancies for one-, two- and three-bedroom units, ranging from about $700 to $1,000 per month.

As for duplexes, a total of 68 popped up within Allison’s attendance boundary. But the information on each of them was limited to the property’s address, its distance from the school and a link to see the front of the property on Google street view.

In cities like Portland, Oregon; Seattle; Washington, D.C.; and Austin, gentrification and evictions are driving forces. The Oregonian newspaper featured a series of stories about the issue in 2018 and noted the early work of Mobility Blueprint in Austin.

In Milwaukee, high poverty, a high rate of evictions and abundant school choice have contributed to the citywide rate of about one in four students switching schools over the course of a year, the Milwaukee Journal Sentinel found in a city and statewide analysis in 2018.

In Detroit, about one in three students are switching schools midyear, according to an analysis by the education website Chalkbeat and Bridge Magazine. School choice and a plethora of low-performing schools drove a lot of the movement, reporters found.

Despite the attention on the issue, district, state and local leaders have been slow to act. Virtually nobody has funded any large-scale solutions to improve access to affordable housing or to more systematically help parents navigate the morass of life issues that often prompt them to move their children to new homes and schools.

For now, Valdez and Childress are adapting their website and training program for a different educational system: Austin Community College, which educates about 41,000 students. Leaders of the college just signed a contract for a customized version of the site that counselors can use to help students find affordable housing close to the system’s 11 campuses.

At the college’s request, the website will also map out day care centers, public schools and bus routes near all the campuses.

“We think this can increase persistence” and stem college dropouts, said Richard Rhodes, CEO of Austin Community College. “Life gets in the way. This website can provide a touch point to all the things students need.”

One of the best digital meat thermometers is finally on sale