The stock market averted disaster in the first quarter after a historically brutal close to 2018.

But can it surge higher? Or with minefields lurking, is a recovery from the depths the best investors can hope for?

Many analysts say the market can reach new highs by year-end, though gains will likely moderate amid a slowdown in economic growth and corporate earnings.

“It’s going to be tough to get significant upside from here,” says Ryan Detrick, senior market strategist for LPL Financial. He added, though, that he expects solid increases that still make the market a good place for investors to put their money.

The Standard & Poor’s 500 index is set to rise about 12.8 percent the first three months of the year, its best quarterly showing in a decade and the strongest first quarter since 1998, according to LPL Financial and FactSet. The Dow Jones industrial average is poised to jumped 10.8 percent. And the tech heavy Nasdaq is set to climb about 16 percent. 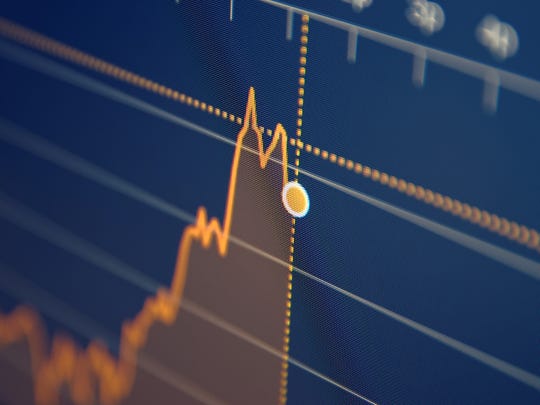 There’s a caveat, of course. The S&P 500 tumbled 13.9 percent in the fourth quarter and 6.3 percent in 2018, its worst annual performance since the 2008 financial crisis. So while the first-quarter advances prompted a sigh of relief, they still left the broad stock index 3.5 percent below its Sept. 20 peak.

Put another way, both the late 2018 plunge and the first-quarter surge were fueled by the Federal Reserve. In December, the Fed raised interest rates and said it planned two more hikes in 2019 despite the global economic slowdown, spurring a further sell-off in already jittery markets.

The market turbulence hammered consumer and business confidence, prompting the Fed to abruptly reverse course and forecast no hikes this year. That has mollified markets, which have bounced back strongly.

“The Fed has gone from being the enemy to a friend of the market,” says Thorne Perkin, president of Papamarkou Wellner Asset Management. As a result, stocks are effectively back to sea level, or close to it.

More: As nation struggles with opioid crisis, workers bring addiction to the job

Here’s the good news: The S&P 500 has gained 10 percent or more in the first quarter 10 previous times since 1950, and in nine cases it has notched further increases the rest of the year that have averaged 5.8 percent, according to LPL and FactSet.

“When you have a good start of the year, the upward trend can stay in play,” says Ryan Detrick, chief market strategist for LPL.

Here are some reasons stocks could post additional healthy gains the rest of the year.

The U.S. economy is slowing but still sturdy. The 3.8 percent unemployment rate is near a 50-year low, job openings are near record high and a robust average of 223,000 jobs were added last year. In February, employers added just 20,000 jobs, though weather effects were a big factor.

Average job gains are expected to slow to about 165,000 this year as low unemployment makes it even tougher for employers to find workers. But that’s expected to further push up average annual wage growth that has topped 3 percent since the second half of last year.

All told, more Americans are working and their pay is rising, trends that should support higher consumer spending. And consumption makes up the bulk of economic activity and corporate earnings.

After a first-quarter that was weakened by the partial government shutdown, the economy is expected to grow 2 percent to 2.5 percent this year as the effects of federal tax cuts and spending increases fade. That’s down from about 3 percent in 2018 but still a solid pace.

The trade fight between the two countries has imposed tariffs that make imports more expensive for U.S. automakers and other manufacturers, narrowing corporate earnings, while hurting exports,  especially for farmers.  The skirmish has left a cloud of uncertainty over the economy and corporate profits.

White House officials have said they’re getting closer to an agreement that would lift the tariffs. Some analysts are wary, noting a deal could be contingent on China agreeing not to steal US intellectual property and other conditions, leaving lingering uncertainty.

Yet Perkin says any deal will be better than the status quo.

“I think we’re going to see a big market pop” when an agreement is reached, he says.

A pact also could provide a jolt to business confidence and investment.

Stocks are still only game in town

With 10-year Treasury bonds yielding a meager 2.4 percent, stocks are still the most promising investment, a dynamic that tends to drive more money equities and fuel further gains.

“It lets a lot of the air out of the tires,” Perkin says.

Here are some warning signs for the market”

Profits of S&P 500 companies are projected to drop 3.7% in the first quarter compared to a year ago, according to FactSet. That’s largely because profits last year were inflated by the federal tax cut. And higher employee wages could further pressure profit margins.

For all of 2019, corporate earnings are expected to grow 4 percent, revised down from about 10 percent three months ago. Still, that’s close to the historical average, LPL says, and should support continued moderate stock gains. LPL predicts a 6 percent advance in earnings.

Recently, yields on 10-year Treasuries dipped below three- month Treasuries. That’s traditionally an ominous sign that means investors don’t have much confidence in growth over the long-term. Each of the past nine recession dating back to the 1950s have been preceded by yield curve inversion.

Yet not all inverted yield curves lead to a recession in the near term. And the average gap before a recession occurs is close to two years. Stocks have plenty of room for growth until then, Detrick says.

The global economy is sputtering, particularly China and Europe. S&P 500 companies draw about 40% of their revenue from sales overseas. Meanwhile, a British withdrawal from the European Union that doesn’t include a trade deal — scenario that seems increasingly likely — could further roil stocks.

A prolonged battle in Congress this summer over raising the nation’s debt ceiling, or borrowing authority, could dampen the economy and markets. The standoff that led to the 35-day government shutdown earlier this year was not an encouraging sign.

Stocks are no longer a bargain

Stocks offered a great deal after the big drop at the end of last year. Now, though, the average S&P 500 stock is priced at nearly 17 times projected earnings over the next 12 months. That’s down from a multiple of 18 in late 2017 but above the historical average.

Bottom line: LPL projects the S&P 500 will reach a record 3000 by the end of the year, meaning an additional 6 percent gain is in the offing. That’s a decent return, though not much different from a diversified bond portfolio, according to LPL.

Perkin believes stocks can do a bit better, with up to an 8 percent additional surge as the economy and corporate profits rise more than expected.

President Donald Trump will be heading into his second meeting with North Korea’s Kim Jong Un Monday expecting “a very tremendous summit. Trump expects a signing summit on a trade deal to be held soon with China. (Feb. 25)
AP

A U.S.-China trade agreement is far from being completed and will require much more work, particularly on enforcement, the U.S. official negotiating the pact told a House panel. (Feb. 27)
AP

Why spring is the best time to visit Phoenix and Scottsdale