From 2015 to 2016 the number of overdose deaths rose 29 percent in New York.
Natasha Vaughn, Albany Bureau

New details about the alleged scheme unfolded throughout a 250-page lawsuit filed by Attorney General Letitia James. It accused other drug makers and distributors of fueling the fire, but focused much of the blame for sparking the historic drug crisis on the Sacklers and their Stamford, Connecticut-based Purdue Pharma company.

“As the Sackler Family and the other defendants grew richer, New Yorkers’ health grew poorer and our state was left to foot the bill,” James said.

FILE – In this Aug. 17, 2018, file photo, family and friends who have lost loved ones to OxyContin and opioid overdoses protest outside the headquarters of Purdue Pharma, which is owned by the Sackler family, in Stamford, Conn. The Sackler family came under scrutiny when a legal filing in Massachusetts gave detailed allegations of how family members and other Purdue Pharma executives sought to push prescriptions for the drug OxyContin and downplay its addiction risks. (AP Photo/Jessica Hill, File) (Photo: Jessica Hill, AP)

Her suit noted that since 1999, “the scourge of opioid addiction unleashed by the Defendants in this action has taken nearly 400,000 lives.”

The Sacklers disputed the lawsuit through a spokesperson’s statement, which called it a misguided attempt to place blame where it does not belong for a complex public health crisis. They also noted the Food and Drug Administration, or FDA, approved the drugs involved in the case.

“Purdue Pharma manufactures an FDA-approved medicine that represents a tiny portion of the opioid market – never more than four percent of nationwide opioid prescriptions and currently less than two percent – while providing life-changing relief for millions of pain patients who need it,” the statement noted.

“Purdue Pharma will continue to defend itself in the litigation as it continues to fight for balance in the public discourse so that society can simultaneously help pain patients in need and create real solutions to the complex problem of addiction,” he said.

Yet the allegations leveled by James’ office offered a starkly different version of Purdue’s actions as the opioid epidemic transformed into a heroin and fentanyl crisis now killing 130 Americans daily.

What follows are takeaways from the lawsuit, which joins more than 250 others filed by communities in connection to opioid addiction.

They also detailed how Purdue money helped pay for some of the Sacklers’ multi-million-dollar real estate holdings in Manhattan, Long Island and other states.

For example, Richard Sackler, who is accused of playing a pivotal role in pushing OxyContin, is associated with the Sackler School of Medicine, Raymond and Beverly Sackler Foundation, and Richard and Beth Sackler Foundation Inc., all three of which are New York nonprofits.

He used money connected to Purdue to buy a $3 million-plus condominium on Manhattan’s East Side in 2017.

Many of the Sackler family members served on the Purdue board for years between 1990 and 2018, as the company created, launched and marketed OxyContin to replace a morphine-based drug that had its patent expire.

With Richard Sackler leading the charge, Purdue launched its blockbuster drug OxyContin in 1996, the lawsuit said, and the strategy included expanding it beyond the “stigma” of only being appropriate for cancer and end-of-life pain.

At the OxyContin launch party, Sackler asked the audience to imagine a series of natural disasters: an earthquake, a volcanic eruption, a hurricane, and a blizzard.

He said: “The launch of OxyContin Tablets will be followed by a blizzard of prescriptions that will bury the competition. The prescription blizzard will be so deep, dense and white…”

In February 2001, a federal prosecutor reported 59 deaths from OxyContin in a single state.

Richard Sackler wrote to Purdue executives: “This is not too bad. It could have been far worse,” the lawsuit said.

In 2007, Sackler applied for a patent to treat opioid addiction. He finally received it in January 2018 and assigned it to Rhodes, a different company controlled by the Sackler family, instead of Purdue.

Richard Sackler’s patent application says opioids are addictive. The application calls the people who become addicted to opioids “junkies” and asks for a monopoly on a method of treating addiction, the lawsuit said.

The suit included an email from Richard Sackler commenting on how the company had to lay the blame of addiction on opioid users.

“We have to hammer on the abusers in every way possible. They are the culprits and the problem. They are reckless criminals,” the email said.

‘Tip of the iceberg’

In March 2013, Purdue staff reported to the Sacklers on the devastation caused by prescription opioids, the lawsuit said.

Staff told the Sacklers that drug overdose deaths had more than tripled since 1990—the period during which Purdue had made OxyContin the best-selling painkiller.

They told the Sacklers that tens of thousands of deaths were only the “tip of the iceberg,” and that, for every death, there were more than a hundred people suffering from prescription opioid dependence or abuse.

Just two months later, at a May 2013 board meeting, staff reported to the Sacklers that they were successfully pushing opioid savings cards through direct mail and email to get patients to “remain on therapy longer,” the lawsuit said.

During a press conference, James accused the Sacklers of transferring their Purdue-related wealth into personal and offshore accounts to limit potential settlements and legal payouts.

While the lawsuit includes some details about the Sacklers getting tens of millions of dollars in annual payments from Purdue, it’s difficult to determine where money ended up due to redactions.

The lawsuit claims the money flowed as evidence of the coming legal retribution.

Purdue, at the direction of the Sacklers, fraudulently conveyed hundreds of millions of dollars of Purdue’s profits from opioids to the Sackler Families, the lawsuit said.

The money flowed every year despite Purdue’s and the Sacklers’ knowledge that they faced certain, and significant, liabilities because of the multitude of lawsuits against Purdue by state attorneys general, including in New York, the lawsuit said. 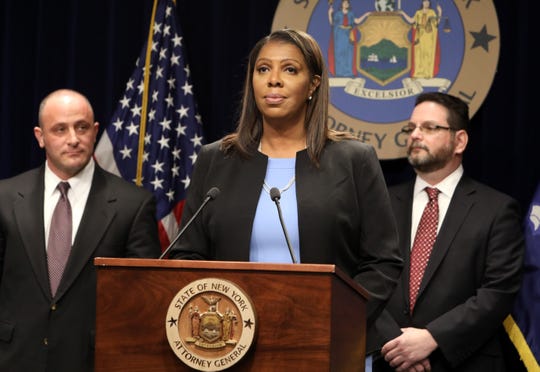 Yet James vowed to seek significant damages from Purdue, the Sacklers and other companies in the lawsuit to aid in treating addiction in New York.

“We won’t stop until our state is free from the toxic grasp of this crisis that has befallen so many New Yorkers,” she said.

“For everyone who lost their life, every parent who will never hold their child again and for every community that has been devastated…today we take a stand,” James said.