If you’ve ever received a headache inducing robocall you certainly are not alone. Veuer’s Mercer Morrison has the story.
Buzz60

Verizon’s free answer to the robocall plague has arrived.

After promising that it would roll out the features earlier this week, the company fulfilled that pledge with Call Filter, a free version of what previously was a $2.99 per month per line option.

With the free version, which shares the same name as the paid service, iOS and Android users will simply need to download the proper app from the App Store or Google Play to set it up.

After it is installed and opened, tap “account,” “subscription status” and then “subscribe” to enroll it for your Android phone. iPhone users need to simply open the app, tap “get Call Filter” and then “tap subscribe” to set up the service for their phones.

The free version of Call Filter will get you spam detection, a spam filter and the ability to report numbers. An alert will be given when the incoming call is likely to be spam. Verizon will let you determine your level of risk to help the network block calls for you automatically, sending them straight to voicemail.

While it begins rolling out the free version today, Verizon says it will take about three weeks before it will become widely available.  You don’t need to have an unlimited plan to sign up, but it won’t currently work with a Verizon prepaid plan.

The service will also work with basic phones plus older BlackBerrys and Windows Phones if you still have them, though certain features will vary. To set up those devices either call Verizon, head into a store or log into your “My Verizon” account on the company’s website. 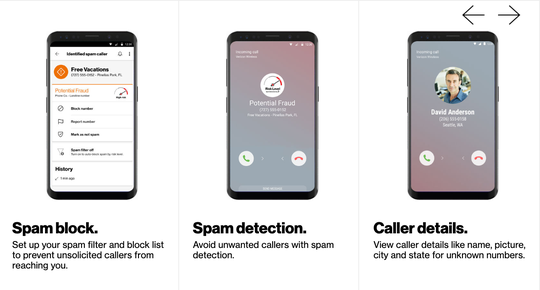 The $2.99 version of “Call Filter” will still exist. Those who opt to pay for it will also gain Caller ID to identify the names of unknown callers, plus the ability to create personal spam and block lists.

You also get a “robocall risk meter”– that ranks spam calls on a “high,” “medium,” “low” scale on your call screen based on their risk for fraud level– and the ability to look up spam numbers.

No one is safe: AT&T CEO gets spam call alert on his Apple Watch during a live interview

Verizon, which also announced Thursday that it has successfully completed a “verified calls” feature on its network that helps it determine whether a caller is legit, showing you a notification that it is verified alongside the full ten digit number. Those who want to see the name of a caller will need to pay for the Caller ID function as part of the premium Call Filter offering.

The company has started deploying verification across its network and will continue doing so over the next few months.

Verizon is the latest major telecom carrier to enable the verification feature, part of an industry push to fight spammers. AT&T and Comcast announced last week that they completed the first verified call between their respective digital home phone networks.

T-Mobile launched call verification on its mobile network earlier this year, though it was only doing so for calls between T-Mobile customers and on a limited amount of devices as it waits for other carriers and networks roll out the feature.

Delta, Korean Air apologize to teens kicked off due to peanut allergy