When Disneyland opens its new Star Wars land on May 31, it’s going to be all about space — providing enough of it so that suffocating crowds don’t occur.

But that also means some fans may have to wait longer than expected to experience Star Wars: Galaxy’s Edge.

So determined are Disney officials to keep crowds at a level where everyone can move around and enjoy the surroundings, they’re making it clear that those without reservations — which are required during the first three weeks — will not be allowed in.

Even as the reservation requirement goes away, Disney will continue to limit access via “boarding passes,” which guests will obtain through a Disney app. Each pass is expected to include an entry time as well as a visitation time period, its length still to be determined.

Managing crowds to keep it fun for all

The goal is to avoid the crush of humanity the highly anticipated land is expected to draw, even though the limitations may alienate some die-hard fans who had perhaps been prepared to wait any number of hours just to get a glimpse inside Galaxy’s Edge.

“We will be working hard to make sure guests have enough time in the land to see all those great things and experience the attraction,” Kris Theiler, vice president of Disneyland Park, said.

Star Wars: Galaxy’s Edge will open at Disneyland on May 31and Walt Disney World on August 29.
USA TODAY

What about at Disney World?

Similar crowd-control measures have not been announced for Walt Disney World in Florida, where Star Wars: Galaxy’s Edge opens Aug. 29.

Officials have said reservations will not be needed, and they don’t expect a free-for-all at this time.

But don’t be surprised if officials implement crowd-control measures based on what they discover during the first three months of Galaxy’s Edge in Disneyland.

No reservation, no entry – and no standby line 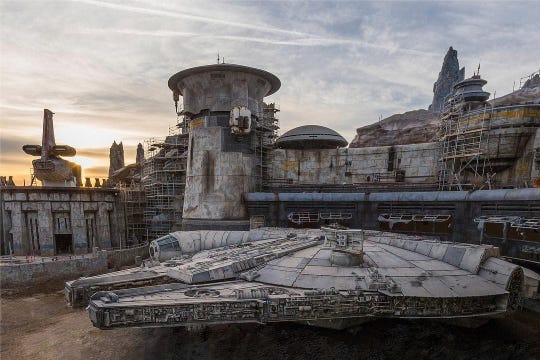 The Millennium Falcon is parked inside Star Wars: Galaxy’s Edge, scheduled to open in June at Disneyland. (Photo: Disneyland Resort)

The plan to limit access to Galaxy’s Edge is just one of many strategies Disneyland is employing to keep the Happiest Place on Earth just that.

From widening pathways and restricting the size of strollers to planning in-queue entertainment at Galaxy’s Edge (the new land’s sole attraction for now), officials have been working for more than a year to prep for the biggest opening in the park’s history.

Among the most impactful decisions was the one to require Disneyland visitors in the first three weeks to have a reservation (in addition to a park admission ticket). From May 31 through June 23, every guest must have a reservation to enter Galaxy’s Edge, no exceptions. There will be no standby line for hopefuls, as some reports have suggested.

The only way to guarantee a reservation to stay at one of Disney’s three on-site hotels: Paradise Pier, Disneyland Hotel or Grand Californian.

Each registered guest gets one reservation, regardless of length of stay. It doesn’t matter if you’re staying one night or five, you’ll be allowed to visit Galaxy’s Edge once during that time.

Consider those three weeks a soft opening or shakedown cruise, where Disney officials will watch closely to see what may have to be adjusted before the new land opens June 24 with no reservations required.

Once reservations go away, guests will have to obtain a digital boarding pass to enter Galaxy’s Edge. Details of the pass — expected to be obtained via a Disney app — have yet to be released.

The boarding pass is likely to include the date and time to visit, as well as a window during which the pass is good. The length of that window may not be determined until Disney officials have watched what guests do while inside Galaxy’s Edge.

Even as Disney puts up a virtual velvet rope, letting in so many people at a time, there is no telling how long the queue will be for Millennium Falcon: Smugglers Run, the only ride ready to go at opening. Star Wars: Rise of the Resistance, a more ambitious attraction, will open at a later unspecified date.

While you’re waiting in line

To keep everyone in line happy (FastPass will not be available), cast members will mingle with guests, leading them in games or providing entertainment. Food and drink will be available without having to leave the line.

Bathroom passes will given to those feeling the urge, allowing them to take care of business and return to their party in an orderly manner.

Here are other ways Disneyland has been preparing for the largest single-themed addition in its history:

Guests will be transported to the remote planet Batuu when they enter Star Wars: Galaxy’s Edge, opening May 31, 2019, at Disneyland. (Photo: Disney Parks)

For months, workers have been widening paths, narrowing planters and moving obstructions to make for smoother traffic flow throughout Disneyland.

Curbs along Main Street and portions of the Hub have been removed, with the pavement smoothed and graded. It’s intended to spread the traffic pattern as guests are no longer constricted by curbing.

The project’s aesthetic focus is Sleeping Beauty Castle, which is undergoing an extensive refurbishment. It will be open in time for Galaxy’s Edge, with a new paint scheme.

Rules for strollers and wagons

Starting May 1, strollers may be no wider than 31 inches (currently 36 inches) or 52 inches long (same as now). This goes for Disney World as well.

Officials also will start enforcing a longstanding no-wagon rule. In the past, the rule has been ignored by guests and overlooked by cast members.

Work continues on the Pixar Pals parking garage. It has been scheduled to open in September, although it could be ready as early as the end of June. The garage adds 5,300 new spaces.

Additional entrances are being added to other parking lots in hopes of improving traffic flow.

On May 1, Disneyland is going smoke-free. Smoking and vaping will be prohibited in Disneyland, California Adventure and Downtown Disney. Same goes for Disney World. The four parks, in addition to Disney Springs (the shopping and entertainment complex), will no longer have designated smoking areas.

Have any tips on relatively unknown, must-see destinations in Arizona? Reach the reporter at scott.craven@arizonarepublic.com or at 602-444-8773. Follow him on Twitter @Scott_Craven2.

How to avoid hurting your career when you mess up