SANTA BARBARA, Calif. – Spring has begun, and the fires and floods that have plagued this area appear to have given way to a new season of rebirth and bloom.

Stearns Wharf is hopping again, tourists are flocking to Old Mission Santa Barbara, the historic building in operation since 1786, and they are taking the elevator to the fourth floor of the County Courthouse building for a selfie under the Clock Tower.

All is well on the “American Riviera.”

If you haven’t been to Santa Barbara before, or it’s been awhile, here’s a quick refresher:

The city is 90 miles up the coast from Los Angeles with celebrities including Oprah Winfrey and Julia Louis-Dreyfus boasting homes in the area; Michael Jackson and Ronald Reagan lived on the outskirts. The city of just under 100,000, is off the Route 101 highway and often is a pit stop for road trippers headed to Pismo Beach and Hearst Castle 90 minutes and 2.5 hours, respectively, north of the city. 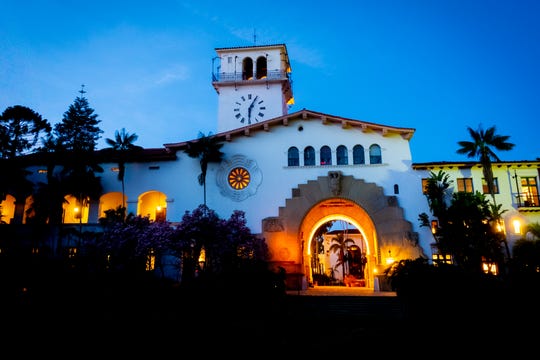 Many people like to just walk up and down State Street, the main business district in town, and visit the many stores selling everything from hats, high-end jeans, T-shirts and sunglasses. It also includes Spanish-style plazas and vintage, working theaters like the art-deco style Granada and Arlington, that revel in their Spanish styles.

Santa Barbara’s most popular attraction is Stearns Wharf, which attracts an estimated 5 million tourists yearly, is said to be the oldest working wooden wharf in California. It sits at the end of State Street and offers a place to eat, fish and have fun. The Wharf is a gateway to the boardwalk that runs through town, attracting cyclists, joggers and the like.

Near the Wharf, a new area called the Funk Zone, has been developed to attract a younger crowd and those interested in wine tasting, breweries and antiques. It’s just off State Street and is adjacent to the Amtrak station. Visitors to Santa Barbara will clearly notice more action and activity on the south side of State Street, near the Zone, compared to the relative weekend quiet of upper State.

A must stop for any visitor is the County Courthouse, which is open seven days a week. The 1929 building is considered the landmark of Santa Barbara, with its four-faced clock tower, red tile roof, arches and carvings every way to Sunday. The view up top is free and a must.

If you love Mexican food, there are more choices in Santa Barbara that you could keep up with. There’s been a line outside tiny La Super Rica ever since Julia Child put it on the map in 2002 with a brief mention in an article for National Geographic Traveler. She called it “one of the most authentic Mexican home-cooking restaurants around.” At Super Rica (cash only), you order at the counter and hunt for an available seat after choosing between the 20 items and daily specials. No nachos or burritos here, more exotic fare like Gordita de Frijol and Chile Pasilla, as well as incredibly cheap fare like a quesadilla for $1.55. As you wait to order, you watch the staff build homemade tortillas, one by one. If the line is too long, head one block down the street to Los Agaves, which promises “the bold flavors of Mexico,” for table service, more traditional fare (fajitas, burritos, etc.), in a more relaxed setting. And the food is just as great there, too.

Finally, Santa Barbara is home to many of the country’s most expensive, fancy seaside resorts and the ones that aren’t on the water aren’t cheap either. Rooms start around $1,000 a night for a weekend for two in April at the Rosewood Miramar Beach, or about $600 at the Hotel Californian, which is in the Funk Zone. So if you’re looking to visit this summer, book early and be prepared to shop around.