Some sauces just don’t cut the mustard but Heinz is looking to change that! Buzz60’s Mercer Morrison has the story.
Buzz60, Buzz60

In an era of pop-up stores and insta-companies, condiment fans are celebrating the 150th birthday of an iconic brand this year: Heinz.

The Pittsburgh-founded company was the brainchild of Henry John – better known as H.J. – Heinz. Ketchup still rules, but the name also adorns everything from mustard and mayonnaise to barbecue sauce and gravy to baked beans and vinegar.

Today, the founder’s last name has second billing to Kraft, which it merged with in 2015. Brands in the Kraft Heinz portfolio include Oscar Mayer, Ore-Ida, Jell-O, Kool-Aid, Velveeta, Maxwell House and Planters. 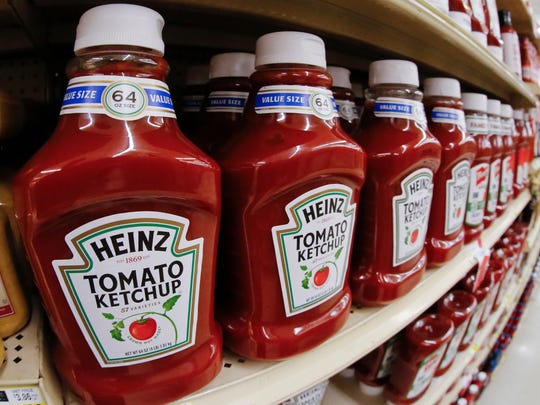 This Feb. 21, 2018, file photo shows a display of Heinz Ketchup on display in a market in Pittsburgh. (Photo: AP)

Why is the Dow falling? Banks and tech stocks drag down market on Wall Street

Here are seven trivia tidbits to “relish” about the company.

H.J. Heinz started out in the food business when he was so young that he makes the current batch of Internet start-up billionaires seem like old-timers. He got into the biz at 8 years old, when he started peddling produce from his mother’s garden. Today, the brand is the exact opposite of a small start-up – a granddaddy of American commerce and part of the fifth-largest food and beverage company on the planet. The company sells an estimated 650 million bottles of ketchup alone annually.

Not the first, but arguably the best … known

The product most people associate with the name Heinz is ketchup, but that’s not the first condiment the business manufactured. That distinction belongs to horseradish. Once again, Heinz looked to his mom for a boost – this time, in the form of her horseradish recipe. It debuted in 1869.

See all that you can see

A century and a half before “transparency” became an industry buzzword, Heinz chose to sell his food in see-through glass bottles, rather than then-popular opaque brown ones. His reasoning was that he wanted “to showcase his products’ quality and purity,” according to the company.

The Heinz name twice came close to getting into 1600 Pennsylvania Ave. H.J. Heinz’s great-grandson, U.S. Sen. John Heinz (R-Pennsylvania), was rumored to be a possible presidential candidate, but he was killed in a plane crash in suburban Philadelphia in 1991 at age 52. His widow, Teresa, later married John Kerry, who ran for president in 2004 and lost to incumbent George W. Bush.

Heinz slapped that number on his packaging, not because he made 57 varieties, but because he liked the aesthetics of it. The Heinz line-up actually included more than 60 foods. You can still see that numeral on most Heinz foods, but its spot on the classic ketchup bottle is key. The company said that’s the perfect place to hit in order to get the ketchup to flow out at its top speed of 0.028 miles per hour.

In the 1920s, the company was the first national brand to have foods certified kosher by the Orthodox Union, the premier U.S. agency of its kind. The approval symbol – a U in an O – can still be found on many Heinz products, including ketchup and baked beans. Those containing meat, notably pork products, are an exception.

Maybe advertising prowess is in the company’s DNA. Rewind to 1893 and the World’s Fair in Chicago: The company’s booth wasn’t near any of the big attractions, so H.J. Heinz came up with a stunt to lure fairgoers. By the time it was over, he’d given away close to 1 million pickle pins. Seven years later, the company was behind what’s believed to be first electronic billboard in New York City – a six-story-high pickle where the Flatiron Building is now. Then, in 1987, Heinz aired its now-classic commercial featuring a bottle slowly pouring out ketchup from the top of a building, giving the bottle-positioner enough time to run downstairs and buy a hot dog before catching the condiment on his food. The company proved prescient when it came to finding talent; the star of that TV ad was future “Friends” actor Matt LeBlanc.