What I’m Hearing: There are very different expectations for the Padres’ Manny Machado and the Phillies’ Bryce Harper.
USA TODAY

Bryce Harper has switched sides – but not divisions. Manny Machado has a home – but not yet a fully-formed core around him in San Diego.

At least we know where they’re playing, though.

And with that, USA TODAY Sports’ projected win totals for the 2019 Major League Baseball season have arrived.

Oh, it’s exactly a month later than we hoped – but hey, how can you sell an honest projection of the upcoming season when the two biggest stars on the market in years are still jobless?

Sure, Harper and Machado themselves won’t make a 10-win difference for anybody. Yet each transaction creates ripples, the sort that can take a half-win here and add it elsewhere, upsetting the delicate balance of competition. 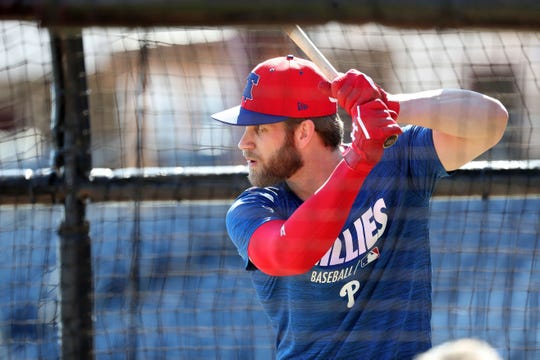 And if our projections are on the nose, it should be a crazy final week of the season.

Our six-person panel’s projections landed on total chaos: A three-way tie in the NL Central, a two-way tie atop the NL East – and all five teams landing on the same record, creating a dizzying set of tiebreakers.

Just because there could be a decent dose of parity doesn’t mean tanking has been eradicated.

A solid eight to 10 teams project to throw in the towel by mid-June; many of them, like the White Sox, found that pulling out of a non-competitive spiral takes far more than one off-season.

Others are trying more earnestly to compete, but find themselves in divisions where more teams are “all-in” than elsewhere – and somebody has to finish fifth. 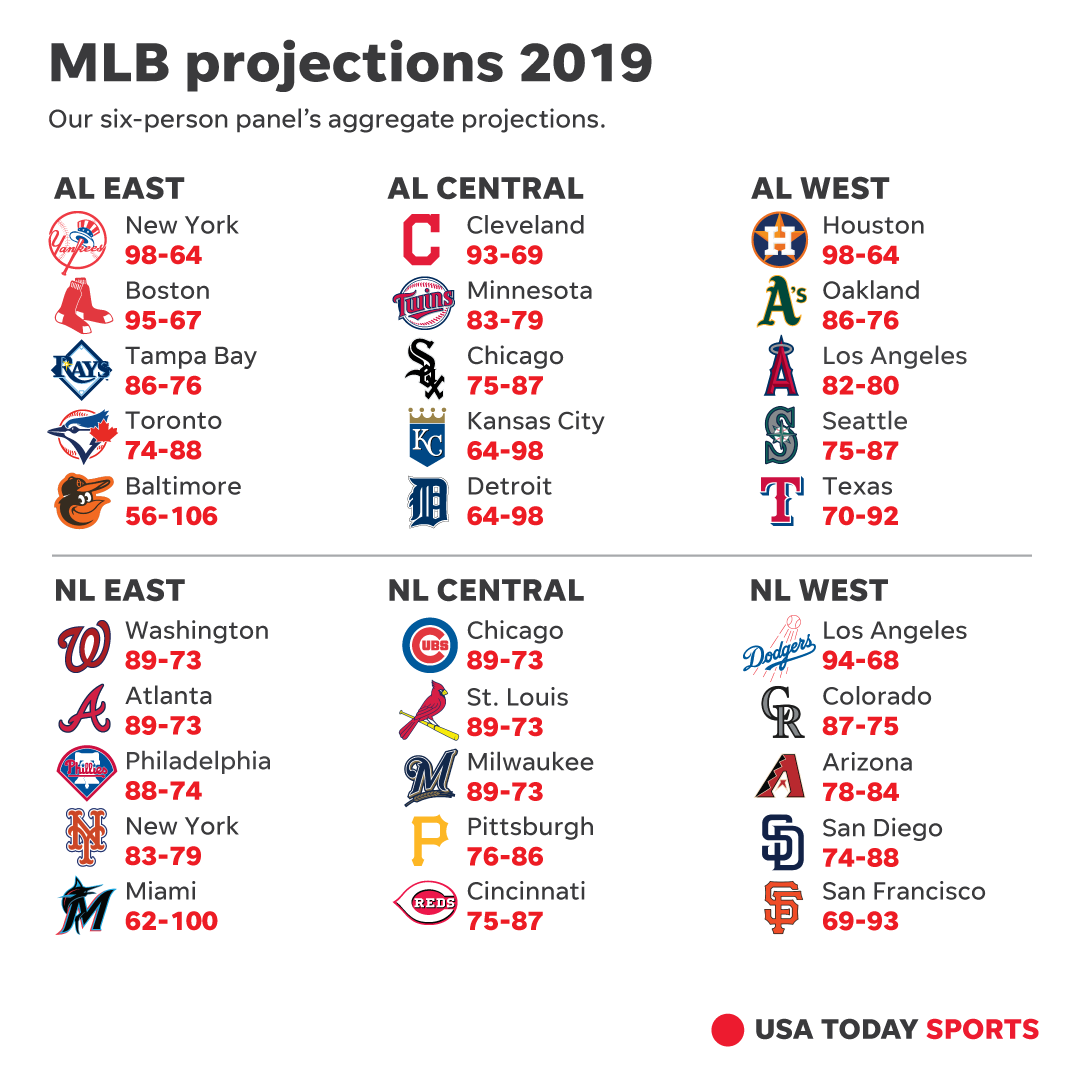 It’s just a light World Series hangover for the Red Sox, but sufficient enough that the reloaded and terribly deep Yankees ease past them for the division title. Will it be an all-East wild-card game? Quite possibly, if the Rays‘ revamped lineup platoons its way to enough runs in support of Blake Snell and The Openers. The Blue Jays may delay Vlad Guerrero Jr.’s arrival, but an ugly re-tooling year is almost inevitable. Can the Orioles avoid becoming the first team to lose 110 games in consecutive years? We say yes – barely.

The year is 2050, and Corey Kluber, Carlos Carrasco and Trevor Bauer are still taking the ball for a 90-plus win Indians team. Or at least it seems that way. No team may be more volatile than the Twins, who could push 90 wins and the Indians or recede toward .500. We expect another big move from them before Opening Day. The White Sox are the best of the worst, buying some stability with veterans like Ervin Santana, Yonder Alonso and Jon Jay – but no Machado. The Royals’ unique gambit – corner the market on speed – is fun and intriguing and may pay off, once there’s pitching to support it. The Tigers haven’t lost 100 since their epic 119-loss 2003 season. That may change.

The Astros kept it interesting last year, waiting until the third week of September to put away the division. Has anyone in the West closed the gap further? Probably not. The Athletics got frugally creative in piecing together a reputable pitching staff last season and winning 97 games. It’s a tough move to repeat – good luck, Marco Estrada – and our panel has them at anywhere from 82 to 90 wins. The Angels will be a chic sleeper pick, and a legit threat if their pitching can, for once, stay healthy. The Mariners and Rangers are in various stages of retreat, but may win more games than anticipated given the amount of veteran talent on both squads.

Welcome to hell. Not only will this be a four-team fight but every squad has a significant emotional investment here. The Nationals, eager to prove they can win without Harper. The Phillies, to justify their $330 million investment – along with other dizzying win-now moves. The Braves, to prove they’re not a fluke and the Mets to show that their rock-star GM can flourish even under the shackles of the Wilpon regime. For now, grab your popcorn and dream on a Max Scherzer-Aaron Nola one-game playoff for the division title. (And then there’s the Marlins. Sigh).

Baseball’s other high-stakes division, where someone is going to finish fourth and be very upset about it. For now, we see it as you probably do: A three-way shootout between the Cubs, Cardinals and Brewers. The margin figures to be so thin that the losers should experience significant regret they didn’t do more this off-season. Regret doesn’t seem to exist in Pittsburgh, where the Pirates continued their 20-year streak of not committing so much as $60 million to one player. The Reds should break a string of four 90-loss seasons; Alex Wood and Tanner Roark make them better and Yasiel Puig makes them fun, but a tough year to climb uphill in this division.

This division nearly nailed the Machado-Harper exacta. Alas, the Dodgers should easily run their streak of division titles to seven even without a new superstar. A rotation 10-deep in useful arms – keep an eye on Julio Urias this year – should have them coasting to the postseason. They’ll get a decent fight from the Rockies, who could probably use another bullpen arm after the defection of Adam Ottavino. The Diamondbacks haven’t yet traded Zack Greinke, and thus should have a passable product even in the post-Paul Goldschmidt era. Machado’s Padres will be mere spoilers this season, but if Chris Paddack and other young pitchers seize the day, they could come quicker than we imagine. Amid a rocky spring that’s included a high-profile Harper chase and an ugly domestic incident involving CEO Larry Baer, here’s hoping the Giants can produce a placid farewell season for manager Bruce Bochy.

Accused to appear Monday in court