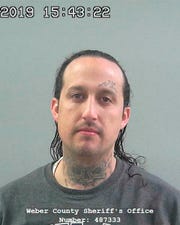 This undated photo provided by Weber County, Utah, shows Cody Tripp. Authorities say Tripp is the main suspect in the killing of 29-year-old Jordan Vigil, who was found dead in Tripp’s Castro Valley, California, home on May 14, 2012. Tripp was booked Wednesday, March 20, 2019 in the Weber County Jail in Ogden, Utah, and is being held without bail. (Photo: AP)

A man on a California sheriff office’s most wanted list for seven years was arrested in Utah this week after local police found him while looking into a fraudulent $3 purchase.

Cody Tripp, 33, was being held without bail in a Weber County, Utah, jail as the Alameda County Sheriff’s Office says he’s wanted in connection with a 2012 homicide.

“We were surprised when he popped up in Utah,” Sgt. Ray Kelly with the Sheriff’s Office told USA TODAY.

According to the Standard-Examiner in Ogden, Utah, the city’s police department was looking into a fraudulent $3.08 purchase when their investigation led to Tripp.

More: Googling Florida man for the viral birthday challenge? Why there are so many wild crime stories

Detective Rachel Walker began the case like every other fraud investigation she handles – no matter the size – and found a Utah homeowner who thought their wallet had been stolen by a moving company employee during a move, the newspaper reported.

After speaking with the moving company, Walker suspected an immigration card given to her looked fake, so she followed up with federal immigration officials who confirmed it was a fraud, according to the Standard-Examiner.

Digging further into the case, police eventually located a phone number they traced to a Salt Lake City apartment. On Wednesday, authorities arrived and learned of Tripp’s identity and took him into custody after learning he was a homicide suspect, the Standard-Examiner reported.

Alameda County homicide investigators were in Utah working to extradite Tripp to California, where they have an arrest warrant waiting, Kelly said.

Tripp is wanted in connection with a 2012 murder in Castro Valley, California, Kelly said. According to a San Jose Mercury News article at the time, 29-year-old Jordan Vigil was found dead in Tripp’s home after a party. Police told the newspaper “a significant amount of blood” was discovered.

Deputies had Tripp pegged as the suspect early on in the case, but “he was obviously a little bit ahead of us,” Kelly said.

Authorities thought Tripp might have left the country, fleeing to Mexico or South America, Kelly said. Now, sheriff deputies want to know what he has been doing the past seven years.

“You can run all you want, but you can’t run from justice,” Kelly said. “His time ran out in this case.”

“This is a prime example of taking what appears to be a nothing case and digging to determine whether it is in fact a nothing case before moving on,” chief Randy Watt told the Standard-Examiner.

“This has been a long seven years for our victim’s family,” Kelly added. “The justice can finally start for them.”

Google opens up video gaming across devices with Stadia platform