The Northern Lights, or the Aurora Borealis. The Vikings thought it was a road to the Gods, but we now know exactly what those beautiful lights actually are.
Buzz60

If you are lucky, the Northern Lights may be coming to a sky near you this weekend.

At least it might if you live in Canada, parts of Minnesota, North Dakota, Montana, Michigan, Maine, New York, Vermont, and New Hampshire, according to The University of Alaska Fairbanks (UAF)’s Geophysical Institute’s aurora forecast.

In fact, the National Oceanic and Atmospheric Administration’s Space Weather Prediction Center suggests that the aurora borealis — or Northern Lights — could be visible as far south as Iowa and Colorado.

Start the day smarter: Get USA TODAY’s Daily Briefing in your inbox

If all goes right, it might also be spotted on the horizon in Chicago and Detroit. 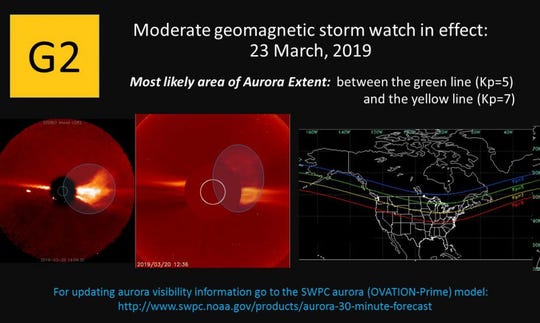 A geomagnetic storm is pushing the aurora borealis farther south this weekend. The National Oceanic and Atmospheric Administration’s Space Weather Prediction Center forecasts where it may be visible on March 23 (Photo: NOAA)

This relatively rare event can be tracked to March 20 when a powerful eruption of solar energy sent an unusually large stream of electrically charged particles streaming toward Earth.

Normally, such particles simply collide with gas particles in Earth’s atmosphere and put on their colorful display, much like the glow of a neon light. Oxygen molecules give off a familiar, ghostly green aurora, while nitrogen produces blue or -red.

While no cause of alarm for personal safety, or even the sensitive North American power grids, the arrival of this potent burst of energy can trigger a geomagnetic storm and disrupt the delicate balance around the poles.

The storm, in turn, pushes the swirling aurora off course, driving it southward for as long as three days and putting on its magic show.

Boom! Here’s the Solar #Flare that unleashed a #CME towards Earth yesterday that prompted the G2 #geomag storm watch for this weekend. pic.twitter.com/smCzLen0Zw

To get the best view, look to the east Saturday night before midnight, as the aurora rises, or to the west after midnight. Warning: this only works if the skies are clear and dark.

Another warning: Don’t expect aurora borealis to put on a dazzling show farther south, where it might appear as only a glow on the horizon in places like Detroit and Chicago.