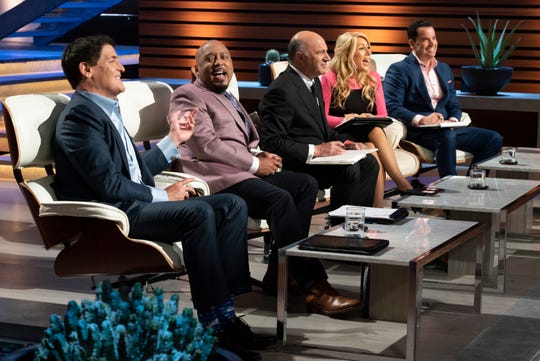 As a dog lover, Hernandez said photos of his dog Logan often ended with Logan turned the other way or slobbering all over him.

“You’ve instantly become a dog photographer,” Hernandez said, showing a slideshow of dogs wearing everything from a birthday hat to a Yoda costume. “Not only can you use Pooch Selfie to get fantastic selfies with your dog, but you can also use it to get some pretty awesome portraits of them as well.”

Jumping into the tank with the sharks he’s long watched on television was overwhelming for Hernandez, who stuttered with stage fright and couldn’t remember the exact number of units he’d sold.

Related: ‘Shark Tank’ exclusive: These are the 20 best-selling products ever featured on the show

Guest shark Matt Higgins calmly suggested he take a moment to gather his thoughts: “Take a breath, but do you know? If you weren’t nervous right now, do you have a good handle on the numbers? Take a breath and give us the whole picture.”

The company sold about 25,000 units at $9.99 a piece for $380,000 in sales through online retail,  Hernandez said. He managed to get Pooch Selfie in Bed Bath & Beyond, but the product struggled in the pet-toy section.

For Kevin O’Leary, the problem was the simplicity of merely attaching a tennis ball to a phone: “Somebody can knock this off in two seconds, right?”

The topic was a sore spot for Hernandez, who almost burst into tears as he recounted defending his vision from others who tried to steal it. (The Pooch Selfie has a U.S. utility patent, he said.)

Hernandez funded his business with $18,000 of his own money and runs it himself, in addition to a day job as an electronics salesman and father to a 1-year-old. With 18,000 units still in inventory, Daymond John wondered why Hernandez didn’t take a slower approach and keep all of his company.

But Hernandez wanted his product to be the first thing consumers think about when it comes to pet photography. More importantly, he wanted to share the joy he gets taking photos of Logan.

“I made this because I love my dog,” Hernandez said. “My dog’s not going to be around forever. That’s my first best friend. I just want to share that with people so they can do the same thing.”

The story struck a chord with John, who’d recently lost a family pet: “My dog Spartan just died. I don’t have any pictures of him looking like that, so I understand the passion and also the love of our little furry friends.”

John offered Hernandez $100,000 for 33.3 percent equity (Hernandez had offered 20 percent), but Hernandez waited to hear what the rest of the sharks had to offer.

“I wouldn’t do that,” Mark Cuban warned him, and in rapid succession, like a chorus, the rest of the sharks went out.

“Daymond, I would love to partner with you,” Hernandez said, shaking hands with John,  who nearly rescinded his offer. After exiting the tank, an excited Hernandez told the cameras, “I watched this show for nine seasons, and now I can’t believe I have a deal.”

76ers' Embiid hates the Celtics, now he needs to beat them