MILWAUKEE – Two-year-old Noelani Robinson, who has been missing since her mother was fatally shot, appears to have been found dead in Minnesota, authorities said Saturday.

Milwaukee Police Chief Alfonso Morales said at a news conference Saturday that the body of a child believed to be Noelani was found wrapped in a blanket on a roadside outside of Blooming Prairie in rural Steele County, Minnesota, around 7 p.m. Friday.

Minnesota authorities have tentatively identified the child as Noelani. A medical examiner there determined Saturday that the preliminary cause and manner of death was homicide due to blunt force trauma to the head.

Agents from the Minnesota Department of Public Safety Bureau of Criminal Apprehension and crime scene personnel executed a search warrant at a hotel in Austin, Minn., where it is believed that the suspect in the case, Dariaz L. Higgins, stayed at one point during the past week. 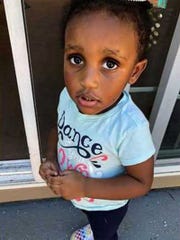 Two-year-old Noelani Robinson, who has been missing since her mother was fatally shot by her former pimp, appears to have been found dead in Minnesota, Milwaukee police said Saturday. (Photo: Milwaukee Police Department)

Higgins is being held at the Milwaukee County Jail and has been charged charged in the fatal shooting of Noelani’s mother, Sierra M. Robinson, 24. Higgins, who was Robinson’s former pimp, allegedly killed her and wounded another woman Monday in Milwaukee

“We believe we have found Noelani. We believe that currently, this is going to be a death investigation,” Morales said at a news conference Saturday.

He offered his condolences to Noelani’s grandmother, Latosha Bryant, who had made a tearful plea for the child’s return.

Asked if Higgins was responsible for the child’s death, Morales said, “That’s where the criminal investigation is shooting for. It’s just too early to tell. Obviously, we need the autopsy to assist us, the time of death and the venue. We believe we’re headed in that direction.”

Morales said the body of the child was found by an off-duty public works employee in Steele County, Minnesota, about 90 minutes south of Minneapolis.

“Just off the shoulder was a blanket and inside that blanket and wrapped in there was a body of a child we believe to be that of Noelani,” Morales said.

March 15: Nationwide search launched for missing girl whose mother was killed in Wisconsin

Morales said the child appeared to have been there for “quite some time.” But he said police will know more after an autopsy is conducted by authorities in Minnesota.

“We believe this death did not occur within the last 24 hours. She had been there for quite some time, which is consistent with the suspect’s time when he was in that area in Minnesota,” Morales said. “That’s consistent where we believe we’re going with the investigation.”

The child’s death was first reported by Milwaukee community activist Vaun Mayes, who said he was asked by the family to confirm that they were told that the child was found dead.

On Saturday, Mayes said that Bryant, Noelani’s grandmother, wanted to thank the community for showing its support to the family. Her focus at this point is on funeral arrangements for her daughter and granddaughter.

A Go Fund Me account has been established to help the family, which is coping with the tragedy. 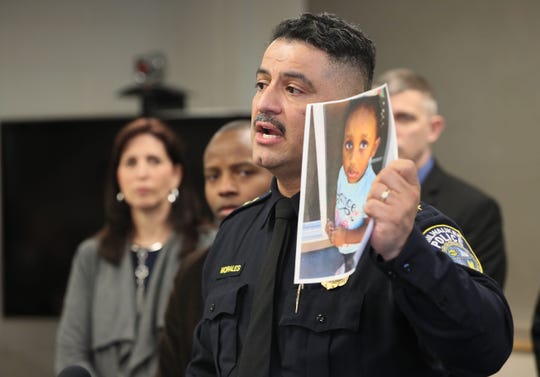 Earlier in the week, Bryant made an emotional plea for the return of the child, saying, “You already took my baby. Just give me back my grandbaby. That’s it. If you don’t want to … just give her to somebody else and have them to take her to a safe place so we can get her. That’s all I’m asking.”

Bryant has described the child as “just so joyful.”

She said her daughter had lived with her in Oklahoma City from 2017 until last May before traveling to Kansas City and Las Vegas, and that her daughter wanted Noelani to have a relationship with her father in Milwaukee, according to a report on WTMJ-TV.

Saturday night, somber-faced mourners gathered to light candles and write messages on balloons as they built a shrine to Robinson during a vigil in Las Vegas. 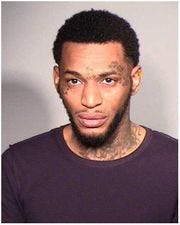 Higgins was arrested Wednesday but had since provided police with false information about his daughter’s whereabouts, Morales said.

Morales said Higgins is the “textbook definition” of the kind of individuals law enforcement is confronting when battling human trafficking.

A criminal complaint issued Tuesday charging Higgins with killing Noelani’s mother revealed that Sierra Robinson had come to Milwaukee from Las Vegas to retrieve the child from Higgins, who had been staying in Miami.

According to the complaint charging Higgins with first-degree intentional homicide and first-degree recklessly endangering safety:

The woman who was wounded in the shooting told police that Higgins is her and Robinson’s former pimp and the father of Noelani.

She said Robinson and Higgins stayed together after Robinson became pregnant but that Robinson broke off the relationship in February and moved to Las Vegas, leaving Noelani with Higgins.

The woman said Higgins was living in Miami when he agreed to meet Robinson in Milwaukee to return the child to her, and the two women met Higgins on Monday.

The child was not with Higgins, and while driving around the three talked about old times and smoked marijuana.

Higgins gave the women an ecstasy pill, which they split, and he and Robinson agreed that they should get back together, according to the woman, who said she noticed a small, assault-style firearm in the SUV they were riding in.

Higgins eventually drove to an apartment building where he said Noelani was.

But when the three got out of the SUV, Higgins shot the women multiple times, according to the complaint, which does not indicate from where Noelani was abducted.

Higgins and another person were taken into custody shortly before 1 p.m. Wednesday.

Contributing: Mike Johnson and Jesse Garza of the Journal Sentinel