So is it Gardner-Webb that becomes the second No. 16 to win?

Ducks come in hot with eight-game win streak and Pac-12 tournament title. If Dean Wade is healthy, Kansas State could be dangerous to Virginia.

Defending national champion Villanova gets to face the team that just knocked off No. 1 Gonzaga in the West Coast title game.

Vols likely lost their chance at a No. 1 seed in the SEC tournament final. But this is a good draw for them.

No. 1 Duke vs. No. 16 North Carolina Central/North Dakota State
No. 8 Virginia Commonwealth vs. No. 9 Central Florida

Could see a Johnny Dawkins-led UCF face former school Duke in the second round.

Hokies just beat Duke without Zion Williamson. Might meet up again in Sweet 16.

Huge for the Bruins of Belmont to get in at-large from the Ohio Valley.

And Richard Pitino will face his dad’s former school in the first round. No coincidence there.

BUBBLE TROUBLE: 10 teams that are sweating out Selection Sunday

Duke vs. Michigan State is a great possible matchup. Tough break for the Spartans not to get a No. 1 seed and then get put with the No. 1 overall seed? Very unfair. Seemed to have deserved better – even a possible No. 1 seed themselves.

Rest of this bracket seems fairly weak. Can’t seem Three ACC teams in the East is unusual unless there is more than seven teams. Could portend good news for N.C. State and Clemson on bubble. 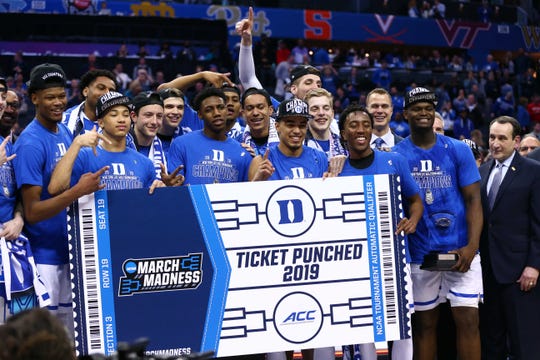 6 p.m.: It’s official 6 p.m. ET and the selection show has started. They will start revealing the automatic entries.

Just more than four months after the start of the college basketball season, the day everyone has waited for is here. Selection Sunday ends all the jockeying for positions and turns the focus to the NCAA tournament bracket reveal.

The selection committee will release the field of 68 starting at 6 p.m. ET. And then March Madness will officially begin with seeding and matchups to contemplate.

Stay tuned for live for the unveiling with news and analysis as teams see their dreams come true and bubble burst, plus the inevitable debate about seeds and which teams have the more difficult and easier paths to the Final Four in Minneapolis.

This year, the broadcast will be different from last year when the field was revealed alphabetically before seeing the region those schools in the four respective regions. CBS will return to a more traditional approach by revealing the brackets first.

The First Four will start the march with two games each on Tuesday and Wednesday, leaving us with 64 teams remaining. The first round will be held on Thursday and Friday with a full schedule of 16 games on both days.