NASCAR will look to have “something different in the queue” by the time Monster Energy Cup Series drivers show up to qualify at Texas Motor Speedway in two weeks.

After all 12 drivers advancing to the third and final round of qualifying at Auto Club Speedway on Friday failed to post even a single qualifying lap, Scott Miller, NASCAR’s senior vice president of competition, suggested tweaks would have to be made.

Ultimately, the top 12 for Sunday’s Auto Club 400 were determined based on second-round speeds, giving RCR’s Austin Dillon the pole.

“I saw obviously what our fans don’t want,” Miller said outside the NASCAR hauler after an all but silent final qualifying session. “Having the fastest 12 cars wait until they couldn’t get a time posted on the board, making kind of a mockery out of qualifying, is not what our fans expect.

“It’s a little bit on us in that we hoped things would go better than that. It’s an exciting show when they’re all out there on the racetrack, but obviously, there’s work to do (with the format) on our part so things like that don’t happen. We want to provide our fans with what they deserve, and we and the teams didn’t do a very good job of that today. We’re all really disappointed.”

“I’ve never seen anything like this before in my life.”- DW

In both the first and second rounds of qualifying, drivers sat at the end of pit road until late in the session. Then, charging onto the track, drivers tried to position themselves where they felt would be best in line to get a draft.

No one wanted to be the driver pulling the line and in the final round, no one was willing to leave the pits first.

Texas will be the next time the series qualifies at a track where a draft could come into play. Next weekend, the series visits the Martinsville short track.

“We will definitely make some tweaks to (qualifying), not quite sure what,” said Miller. “We don’t want to go back to single-car qualifying. There may not be another way, but we want to exhaust every possibility before we (go back) because that’s not as much fun, not as much of a show as the group situation.

“We’ll try to figure out a way to adjust the group qualifying thing and not go back to single car; but we got some work to do on that.”

Chase Elliott acknowledged no one wanted to be first out on the big Fontana track Friday. The Hendrick Motorsports driver doesn’t know what the fix should be, but said it was certainly entertaining to see drivers drafting and battling to set up the right gap to benefit from in the first two rounds. 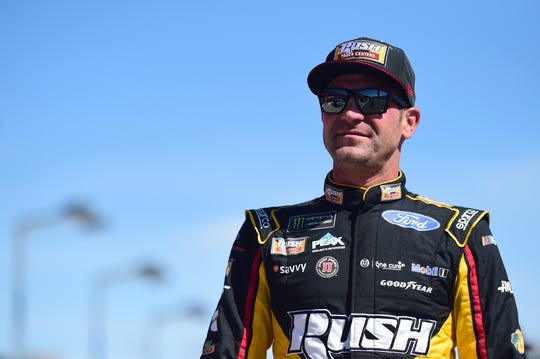 Clint Bowyer says, “I am a little bit out of patience now with Fridays.” (Photo: Jared C. Tilton, Getty Images)

Stewart-Haas Racing teammates Kevin Harvick and Clint Bowyer, who will start second and ninth respectively, said the fans in the grandstands clearly voiced their displeasure.

“We got booed,” said Bowyer. “It’s disappointing for everybody involved. I don’t know — I saw this coming three weeks ago. I think we all did. Unfortunately, we are going to have to be reactive instead of proactive.

“It’s a learning process, the whole package is. Everybody knew that going in, and everybody has been patient, but I am a little bit out of patience now with Fridays.

“There is so much hard work and dedication by so many teams to go out there and build the fastest car known to mankind inside the walls of their organization, and it just doesn’t matter. That is not racing.

“I feel like we are capable, as an industry, of putting on a better show than this. I know (NASCAR) will take the right (steps) to correct things, but unfortunately, it took something like today to (force) adjustment.”

Harvick deferred to NASCAR would whether a change in the format is necessary.

But he said, “I think the crowd booing tells the story. We do the best that we can, though, to try to put ourselves in the best position; and it was just a handful today.”

Fifth-place qualifier Joey Logano said his No. 22 Team Penske team blew it in the final round, but so did everyone else.

Ryan Newman, who qualified seventh, also was unhappy about how qualifying has played out recently.

“I don’t think that was a very successful use of TV time for our sponsors,” he said. “I told you all back in Vegas that I am still a big fan of single-car qualifying. That is all I need to say, really. That is the way qualifying should be.

“The gamesmanship that goes on now, the lack of giving it 100 percent — that’s not what qualifying is all about.

“But that is the program that NASCAR set forth, the rules they laid down and the box they put us in. Shame on us for not getting a lap in today.”