Swedish environmental activist Greta Thunberg has been nominated for a Nobel Peace Prize for her work leading a youth campaign to halt climate change.
Time 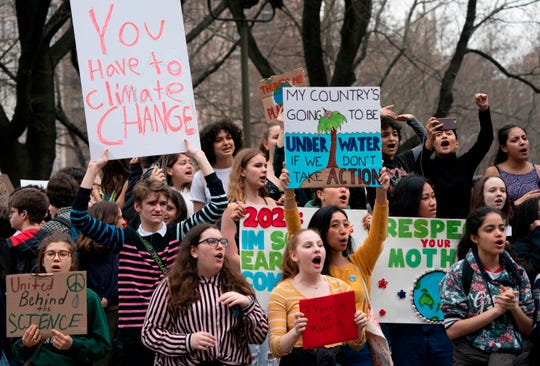 Protesters gather during the Global Climate Strike NYC March March 15, 2019 near Columbus Circle in New York. – Hundreds of thousands of young people skipped school across the globe on Friday, March 15, 2019 to march through the streets for an international day of student protests aimed at pushing world leaders into action on climate change. (Photo: Don Emmert, AFP/Getty Images)

It’s been quite a week for 16-year-old Greta Thunberg, a Swedish climate activist who was nominated on Wednesday for a Nobel Peace Prize.

On Friday, the streets took over, as tens of thousands of students in 112 countries turned out to join her call for action to combat climate change.

In the U.S. alone, some 100,000 young people were participating in at least 400 separate protests in all 50 states, organizers said.

In Washington, around the U.S. Capitol, hundreds of students gathered Friday bearing signs saying “I Want You To Panic,” “Time is Ticking” and “It’s Our Future.”

Worldwide, the turnout for the “School Strike For Climate” protests at some 1,700 locations from Berlin, to Hong Kong and from New Delhi to the edge of the Arctic Circle.

The overall movement Thunberg started is called “Fridays For Future,” which began just last August when the teenager sat in front of the Swedish parliament every school day for three weeks, to protest the lack of action on the climate crisis. She then encouraged others students to skip school to join protests demanding faster action on climate change.

“We are facing a disaster of unspoken suffering for enormous amounts of people,” Thunberg said at the World Economic Forum in Davos in January. “Solving the climate crisis is the greatest and most complex challenge that homo sapiens has ever faced.”

—In Paris, several thousand students, some bearing “Now or Never” signs, turned out around the domed Pantheon building that rises above the Left Bank.

—In rainy Warsaw and other Polish cities, thousands of students marched to demand a ban on burning coal, a major source of carbon dioxide. Some wore face masks and carried banners reading. “Today’s Air Smells Like the Planet’s Last Days” and “Make Love, Not CO2.”

—In Vienna, police said about 10,000 students turned out while in neighboring Switzerland a similar number protested in the western city of Lausanne.

—In Helsinki, 3,000 students rallied in front of Finland’s Parliament sporting signs such as: “Dinosaurs thought they had time too!” 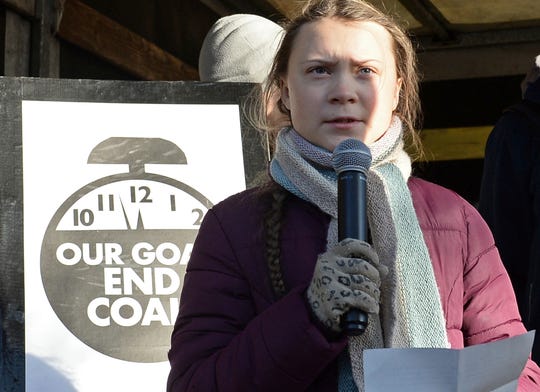 Swedish activist Greta Thunberg, then 15 years old, speaks to climate activists during the March for Climate in a protest against global warming in Katowice, Poland, on Dec. 8, 2018. (Photo: Alik Keplicz, AP)

—In Madrid, thousands marched through the Spanish capital and more than 50 other cities.

— In Copenhagen, Danish Prime Minister Lars Loekke Rasmussen praised the thousands of students who turned out, tweeting, “we must listen to the youth. Especially when they’re right: the climate must be one of our top priorities.”

The warnings about the state of the planet’s climate continued to roll in.

Tomorrow we school strike for the climate in 1769 places in 112 countries around the world. And counting.

Everyone is welcome. Everyone is needed. Let’s change history. And let’s never stop for as long as it takes. #fridaysforfuture#schoolstrike4climate#climatestrikepic.twitter.com/xpCLQN8icv

NASA said that the past five years have been the warmest five years since records began in the late 1800s. And the level of atmospheric carbon dioxide — the gas scientists say is most responsible for the warming — has spiked to levels not seen in thousands or likely millions of years. 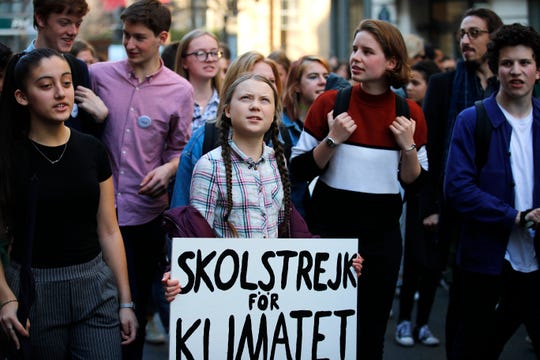 In addition, as the UN Intergovernmental Panel on Climate Change warned last October, “rapid, far-reaching and unprecedented changes in all aspects of society” are required to ward off the worst impacts of global warming.” The goal is to cap global warming at 1.5 Celsius (2.7 Fahrenheit) above pre-industrial levels, which may prove nearly impossible unless swift action is taken, the panel said.

More: Carbon dioxide in our atmosphere may soar to levels not seen in 56 million years

As for the Nobel, Thunberg tweeted that she was “honored and very grateful for this nomination,” which was made by three Norweigian lawmakers. The prize will be handed out later this year.

Beto O'Rourke was member of hacking group as a teenager