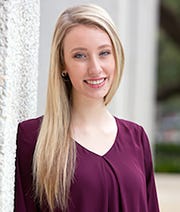 JACKSON, Miss. – A missing part on an 18-wheeler probably led to the death of a college student at a Mississippi rest stop, a Mississippi Department of Transportation official told The New Orleans Advocate.

On March 5, Tulane University student Margaret Maurer was at a rest stop with friends in Gautier. Police said a tractor-trailer was traveling westbound on Interstate 10 when two of its wheels came off. The wheels then crossed the eastbound lanes, entering the rest stop. Maurer and two friends were about to get back into their vehicle when the tires hit her and two cars.

The absence of a locking ring, a $3 part, was cited as a probable cause of the incident, said Willie Huff, director of the transportation department’s office of enforcement. Huff said the metal ring – a 3-inch locking washer – was missing when inspectors unpacked the outer hub of the wheel assembly. It is one of two rings that are meant to lock in place the large lug nuts holding the wheels in place. Only one ring was found, Huff told The Advocate.

It is not mentioned in a brief report by the Mississippi Department of Transportation on the inspection that was done after the incident. That report, provided to The Advocate by the Gautier (Mississippi) Police Department after a public-records request, found “out of adjustment” brakes where the wheels came off, but blamed the problem on a common failure of newer air-brake systems.

Inspectors also found a leaking seal, a violation that prompted state officials to order the trailer taken out of service for repairs. Huff said the leak may have been caused by damage from the loss of the wheels. Neither of those issues would have caused the wheels to come off.

Huff said that the missing ring wouldn’t have broken off. He thinks it is more likely it was not installed. 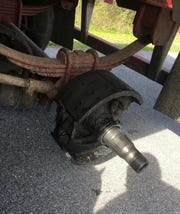 This Mississippi Department of Transportation photo shows the axle of the 18-wheeler involved in March 5, 2019, accident that killed a Tulane University student. (Photo: MDOT)

The truck is owned by Dana Transport Inc. of Avenel, New Jersey. It also is listed under a related company, Suttles Truck Leasing of Demopolis, Alabama.

Both companies are in good standing with the Federal Motor Carrier Safety Administration, with “satisfactory” ratings and a better-than-average record on crashes and vehicle safety.

Huff said the missing ring would not have been detected in the kind of unannounced roadside inspections that are logged into the federal database.

David Dorrity, a South Carolina trucking safety expert who frequently testifies in court cases, told The Advocate there are three main reasons that wheels can fly off big-rigs:

Dorrity said wheel separations usually occur on the left side of a truck, where the wheels turn against the clockwise torque of the nuts. 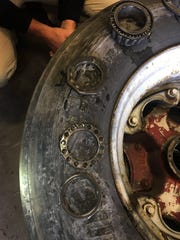 This Mississippi Department of Transportation photo shows parts after the wheel assembly was unpacked. A locking ring was missing. (Photo: MDOT)

Maurer of Minnesota was a senior at Tulane University in New Orleans, where she studied ecology and evolutionary biology, USA TODAY reported.

University president Mike Fitts described Maurer as an “extraordinarily gifted student and a leader among her peers” in a written statement.

“She was planning to graduate in May to pursue a career in scientific illustration – a field that combined her skill as a scientist, her incredible artistic talent and her love of nature,” he said.

Speaking with Minnesota’s KSTP-TV, Maurer’s mother said the “freak accident” happened as her daughter and her friends took a restroom break during a spring-break road trip.

“It’s absolutely a random freaky thing,” Tracy Maurer told the station. “It’s not right. There’s so much that’s wrong about this. It’s just random. I really want to be angry at somebody, but I can’t be.”

Board approves Raiders lease to remain in Oakland in 2019