American Airlines pilots’ union told their members not to fly to Venezuela, after a State Department warning about unrest in the country.
Buzz60

American Airlines is stopping flights to Venezuela after the Allied Pilots Association union, which represents 15,000 of the airline’s pilots, warned its members not to fly there.

American was the last major U.S. carrier to fly to the troubled country. It flew daily to Caracas and Maracaibo from Miami.

The airline said Friday that it temporarily stopped the flights as it evaluated conditions in Venezuela, where civil unrest has increased amid opposition to president Nicolas Maduro.

The union’s warning came amid the U.S. State Department reissuing its Level 4 Travel Advisory for Venezuela earlier this week.

More: Power out, water scarce, looting: What is Trump administration’s next move in Venezuela?

American airlines is testing a new feature that lets customers know when their flights have been overbooked. Buzz60’s Natasha Abellard has the story.
Buzz60

“In its Travel Advisory, the U.S. Department of State cites ‘crime, civil unrest, poor health infrastructure, and arbitrary arrest and detention of U.S. citizens,’ ” according to the association’s note, sent to USA TODAY by communications committee chairman Captain Dennis Tajer. “The Travel Advisory also notes that ‘violent crime, such as homicide, armed robbery, kidnapping, and carjacking, is common,’ and recommends that U.S. residents ‘traveling in Venezuela should depart Venezuela.’ “ 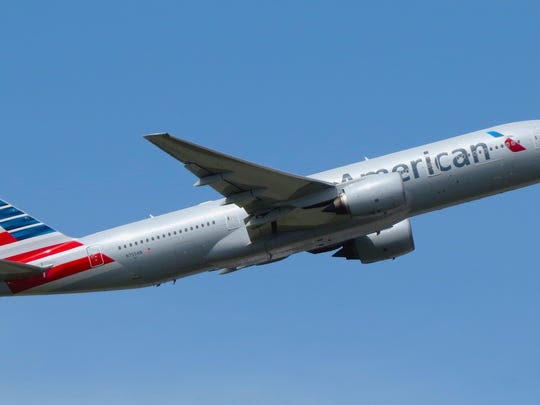 The Allied Pilots Association − the certified bargaining unit for 15,000 American Airlines pilots − is warning its members not to fly to Venezuela. (Photo: Kiefer / Wikimedia Commons)

Additionally, the union’s guidance noted that “the U.S. Embassy in Caracas has suspended operations and has withdrawn diplomatic personnel from Venezuela, and is not providing any consular services.”

“Until further notice, if you are scheduled, assigned, or reassigned a pairing into Venezuela, refuse the assignment by calling your Chief Pilot or IOC Duty Pilot … ,” the note said. “Inform them that you are refusing the assignment in accordance with the direction of the U.S. Department of State. APA will provide follow-on information as soon as it becomes available.”

The notice closes with a succinct reminder: “To reiterate: Do not accept any trips to Venezuela.”

More: Venezuela has endured four days of blackouts. This is what it looks like there