So many streaming services and so little time to find the one that suits you best. What’s a music lover to do? Talking Tech has you covered.
USA TODAY

CEO and founder Daniel Ek alleged that Apple, which with its own Apple Music streaming service competes directly against Spotify, “introduced rules to the App Store that purposely limit choice and stifle innovation at the expense of the user experience – essentially acting as both a player and referee to deliberately disadvantage other app developers.” Ek outlined his case in a statement released on the Spotify blog and in a Time to Play Fair web post.

“After trying unsuccessfully to resolve the issues directly with Apple, we’re now requesting that the EC take action to ensure fair competition,” he said.

Apple has not yet responded to a USA TODAY request for comment. 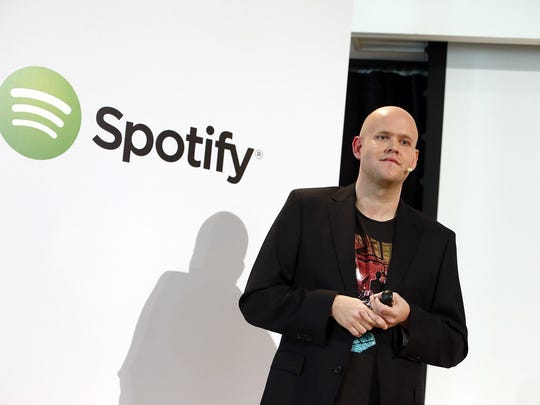 Spotify hasn’t spelled out the economic damage to the company but has complained about Apple’s practices for years. Apple introduced Apple Music in 2015.

Ek says that Apple requires Spotify and other digital services pay a 30 percent tax on purchases made through Apple’s payment system, including upgrading from Spotify’s free to premium service.

Admissions scam: Felicity Huffman and Lori Loughlin are not alone. See the list of who has been charged.

“If we pay this tax, it would force us to artificially inflate the price of our premium membership well above the price of Apple Music. And to keep our price competitive for our customers, that isn’t something we can do,” Ek wrote.

Spotify users pay $9.99 a month for its Premium offering, which as of a partnership announced Tuesday will include some free Hulu content. That’s the same price Apple charges for an individual Apple Music subscription.

According to Ek, if Spotify decides to forego Apple’s charge, “Apple then applies a series of technical and experience-limiting restrictions on Spotify.  For example, they limit our communication with our customers – including our outreach beyond the app. In some cases, we aren’t even allowed to send emails to our customers who use Apple. Apple also routinely blocks our experience-enhancing upgrades. Over time, this has included locking Spotify and other competitors out of Apple services such as Siri, HomePod, and Apple Watch.”

Ek says Spotify wants to be treated the same as other apps such as Uber and Deliveroo, which aren’t subjected to what he terms “the Apple tax.” Spotify claims Apple applies the tax to a “targeted” group of rivals.

“Competition pushes us to evolve and improve both the customer and creator experience. It’s not something we ever have – or will – shy away from. So, let me be clear that this is not a Spotify-versus-Apple issue,” Ek said. “We want the same fair rules for companies young and old, large and small. It is about supporting and nurturing the healthy ecosystem that made our two companies successful in the first place.”

Apple announced a media event to be held on March 25, in which the company is expected to introduce a new set of subscription services, focused on news and entertainment. Spotify claims the timing of its complaint has nothing to do with Apple’s upcoming event.