Clay Shrout in 1994 and a more recent photo (Photo: File)

CINCINNATI – Clay Shrout has been in jail for the past 25 years, all of his adult life. This month, the man who killed his entire family and took a classroom full of students hostage could be released on parole.

Shrout was 17 in 1994. By all accounts, he was smart, gifted even. He excelled as a student at Ryle High School in suburban Northern Kentucky, but there were signs he was in a spiral.

His friends said he had become depressed and obsessed with death and gore. He inexplicably quit his job at Rally’s, jumping out of the window mid-shift. He brought a stun gun and bullets to school.

His parents took away the keys to his truck, his phone privileges and insisted he stop listening to heavy metal and alternative rock.

The stories about Shrout from the time have all the buzzwords that would later sprinkle coverage of school shooters: Anarchist Cookbook, black trench coat, combat boots. It would be another five years before the Columbine school shooting in Colorado.

Shrout even has his own entry on the website schoolshooters.info, but he never hurt any of his fellow students. No shots were fired at Ryle High School that May 25.

What happened is really a tale of two crimes: The first was horrific, but the second was, in some ways, more memorable. Today, it is easy to see the classroom takeover as a foreshadowing of things to come.

Four dead in their bedrooms

Walter and Becky Shrout were college sweethearts meeting while they were both at Georgetown College. They were in their mid-20s when their son was born. In the following years, they had two daughters, Kristen and Lauren.

The churchgoing family lived in a two-story house on Tiburon Drive in Florence, Kentucky. There was a pool in the back and flowerbeds in the front. They owned two horses.

Kristen, 14, and Lauren, 12, were both involved in gymnastics and rode the family horses at shows. They played with the family pets: Cleo the black Labrador, Lady the poodle and a gerbil.

On Tuesday, May 23, Walter and Becky were attending a school concert to watch Lauren play the xylophone. That’s the last time most people ever saw them alive.

The sole account of what happened that Wednesday morning comes from Shrout’s best friend, Richard Brown. Shrout called him around 6 a.m.

Brown said Shrout woke up with the intent to kill his parents. The rest of the conversation he recounted to reporters at the time:

Shrout said he got up at 5 a.m. armed himself with a .380 caliber pistol and walked into his parent’s bedroom. He shot his mother first, then his father. The noise brought Kristen to the doorway of her own room where she was also gunned down.

Shrout didn’t say how he shot and killed his sister Lauren, but did say he shot his father a second time as he crawled toward the door of his bedroom. 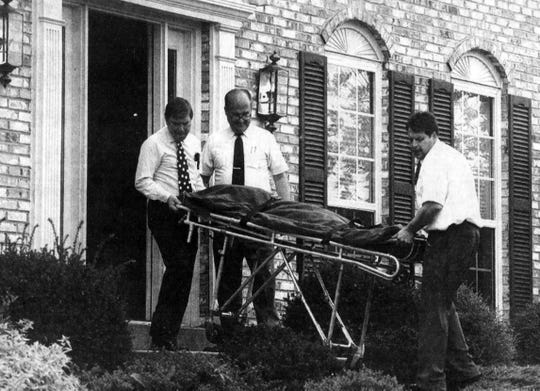 Investigators remove a body from the Shrout family home. Clay Shrout’s mother, family and two sisters were all found fatally shot in their bedrooms. (Photo: File)

It was the murder of his family that sent Shrout to prison. The charges related to his actions at the school were dropped as part of a plea deal, a deal that Shrout accepted to avoid the death penalty.

There was no trial. The judge declared he was guilty, but mentally ill.

Shrout never had to explain why he did what he did. The courts sealed his psychological evaluations.

Clay Shrout took a plea deal in 1994. He was found guilty, but mentally ill, in the murders of his parents and sisters. (Photo: File)

For Gale Sams Sipple, whose son attended Ryle at the same time as Shrout, the slaying of his family outweighs anything that happened at Ryle. She thinks Shrout should stay in jail.

“He has none of the things that parolees who are successful in re-entering life outside prison have; most importantly, a support system,” Sipple said. “He killed his support system that day in 1994.”

‘I could come face to face with him’

After his phone call with Brown, Shrout called another friend, then his prom date, Danielle Butsch. He drove to pick up Butsch, who went to a different school, and headed for Ryle. Police later called it an abduction.

Teacher Carol Kanabroski didn’t know Shrout had a gun when he walked into her trigonometry class that Wednesday. She just knew he was late and had brought a girl with him, and she wanted an explanation.

When Shrout encountered his math teacher, he explained someone was holding a class hostage. Kanabroski asked who.

“It was me,” Shrout said, according to students in the room, and he pulled out the gun.

More: How an Indiana school protects against mass shootings as the ‘safest school in America’

Kanabroski asked if she could help him, and the teen then told the class he had just killed his family. He told Kanabroski to keep teaching.

“My one concern through that whole thing was how do I keep my students safe,” Kanabroski told The Enquirer in a recent interview.

She said she tried offering herself as a hostage and found herself wondering if her desk would stop a bullet.

“My students were terrific. They followed my lead, staying calm,” she said. “Believe me, it was hard to stay calm.” 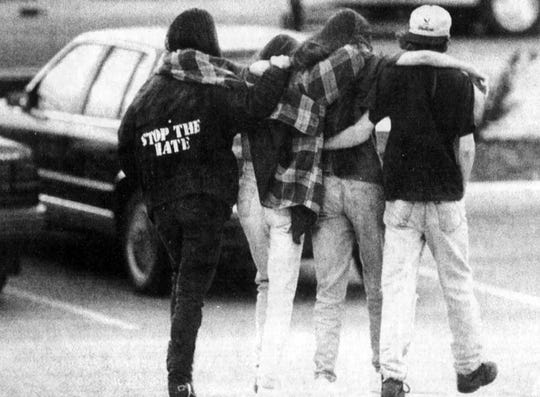 There was a meeting held at Ryle High School after the shooting to allow students to grieve together. About 500 people attended. (Photo: File)

When a student came to the door of the classroom, Kanabroski managed to quietly pass along that someone had a gun in the classroom. That student relayed the information to the office, and Vice Principal Steve Sorrell quickly came in.

In an act of heroism, he convinced Shrout to let the class go and turn over the gun. The ordeal was over in about 17 minutes.

Marcie Fillmore Francis was in the classroom that day. She said it was the first time she really felt it could be the end.

“This could be the time that I die,” she recalled thinking. “Do I need to square anything with God?”

Now, a quarter century later, she believes Shrout should be released if he has reformed.

“I would love for him to have another chance to grow and move on,” Francis said and suggested he could possibly help troubled teens.

Some friends of Clay Shrout supported him after he was arrested. They embraced outside the Boone County Courthouse the day he was arraigned. 15-year-old Danielle Butsch, who police initially said was abducted by Shrout, yelled “I love you” as he walked by. (Photo: File)

Kanabroski tries not to think about the incident very much, but she never really moved on. She kept teaching in the same classroom – Room 203 – for another 20 years until she retired in 2015.

Kanabroski said she has put her trust in the parole board to make the right decision.

“It does frighten me,” she said. “If he gets released on parole, I could come face to face with him.”

More: Arming teachers in schools will be banned in New York, among other new gun-control measures

There was gun violence in schools before Columbine and before Shrout took a pistol a class.

In September 1993, a New Richmond, Ohio, freshman brought a gun to school and took his social studies class hostage until a teacher was able to talk him into surrendering. The student was sentenced to six months in juvenile detention.

Aaron Gillum sits on Kentucky’s State School Security and Safety Board. He was also in Kanabroski’s classroom the day Shrout came in with a gun.

He remembers when the code phrase was broadcast over the intercom that day, a signal for other teachers to lock their doors. He said it was something like, “Would the superintendent please report to the office.” It was part of Ryle’s newly formed crisis plan.

Gillum said there were three people in class that day who knew what that code meant. Kanabroski, himself and Shrout. Gillum said he and Shrout were both fascinated by computers and both had accessed administrative files on the school computer system that contained the code.

Gillum considers what happened at Ryle a warning shot.

After Parkland shooting: A day-by-day fight over guns in America

“I don’t know that we’ve learned enough in the last 25 years,” he told The Enquirer. “I don’t know how many of those warning shots you get.”

Gillum says schools are still having major problems in anticipating troubled students and developing realistic safety plans. He says a lot the shortfalls come down to funding issues.

“Through a horrifically massive amount of evidence from the school violence events in our country over the past two and a half decades,” he said, “we should equally have amassed enough research and conclusions on how to predict, prevent, and repel any situation we’ve encountered.”

Kanabroski echoed many of Gillum’s concerns and added that teachers need help.

“Teachers can see 125 students a day,” she said. “It’s hard to do your job and be a mental health professional. 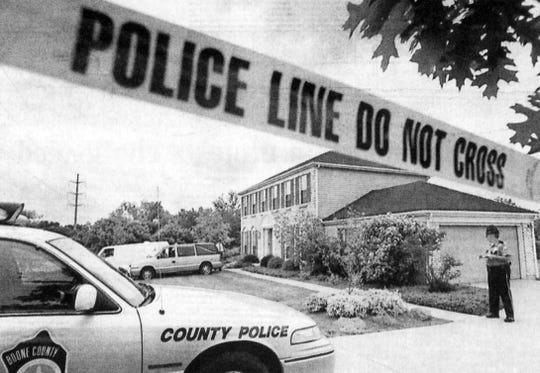 Police investigate at the home of Clay Shrout on Tiburon Drive in Boone County. (Photo: File)

‘Once you go over that line’

Shrout’s parole hearing is scheduled for March 20. The board could decide his fate that same day, but they have the option of taking several days to finalize their decision.

In addition to the murders, the board will also consider Shrout’s behavior since he’s been in prison.

During the first 10 years of his sentence, Shrout accumulated 29 pages of infractions. These included having weapons in his cell and planning an escape.

Gillum doesn’t believe Shrout will be granted parole and thinks he should stay in prison because of how remorseless he was after the killings.

“When you observe something like that directly, you have your sense that everything is OK destroyed,” Gillum said. “I don’t think once you go over that line there’s any coming back.”

Mexican authorities investigating after US student plunges to his death Video