A powerful storm will unleash a ferocious mix of snow, rain and wind across the central USA through Thursday.

“While not a tropical system, winds will rival what’s seen in a Category 1 hurricane,” said weathermodels.com meteorologist Ryan Maue.

The worst weather is forecast for the Plains, from Texas up to the Dakotas. “We expect a major blizzard to unfold with winds likely to approach hurricane force, heavy snow and massive drifts,” according to AccuWeather meteorologist Alex Sosnowski.

Wednesday, 1-2 feet of snow and howling winds will lash portions of Colorado, Wyoming, South Dakota and Nebraska, where blizzard warnings are in effect. The National Weather Service warned of “impossible travel conditions.”

“You risk becoming stranded if you attempt to travel through these conditions,” it said.

A blizzard warning was issued for Denver, where 4-7 inches of snow and wind gusts of up to 44 mph are forecast for Wednesday. At Denver International Airport, delays and cancellations will be likely, AccuWeather said. 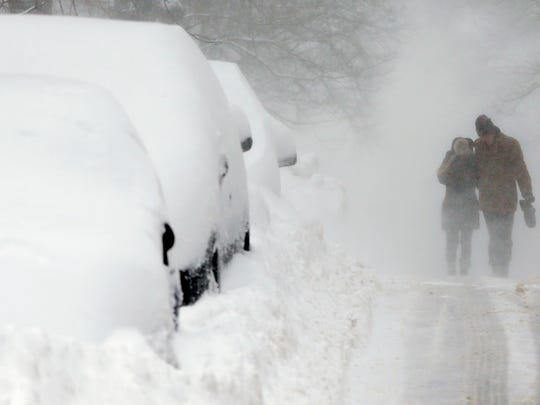 Wild, destructive winds, gusting more than 100 mph, are forecast in Texas, New Mexico, Kansas and Colorado, where widespread power outages are possible. Blowing dust will reduce visibility to less than a mile at times. The weather service office in Midland/Odessa, Texas, said Wednesday could be “the windiest day in years.”

More: Tornadoes cause damage in south; no injuries reported

“High winds may end up stretching over 1 million square miles of the central states with this storm,” AccuWeather’s Sosnowski said.

In the Upper Midwest and around the Great Lakes, as much as 3 inches of drenching rain on top of mounds of already-fallen snow and sodden soil could lead to flooding.

There is high confidence that a major winter storm will affect a large part of the central U.S. Wednesday into Thursday. Severe blizzard conditions are expected in some areas. You risk becoming stranded if you attempt to travel through these conditions. pic.twitter.com/kxOyf0WE0I

“The greatest risk of flooding will tend to be in urban and poor drainage areas where piles of snow are blocking storm drains,” according to AccuWeather meteorologist Kristina Pydynowski.

After a chance of severe thunderstorms Tuesday in Texas, the tornado threat in the South in this storm is lower than in the past two big storms.

The storm is unusually potent and “will have an ‘eye-like’ feature similar to a hurricane,” according to Maue.

The Weather Channel named the winter storm Ulmer. No other private weather firm, nor the National Weather Service, uses that name.

While the central USA endures the storm, both coasts will see mostly tranquil weather this week.