The federal budget is usually talked about in millions, billions or trillions. We broke it down to a more relatable scale.
Video provided by Newsy
Newslook

The ax will fall hard on spending, so get ready to chop, chop, chop.

“Hard-working American families make these sorts of tough decisions every day,” Russ Vought explained in an article published last month on the website RealClearPolitics. “The president believes Washington should be no different.”

Get it? The federal government is just like you, struggling to make ends meet and forced to live within its means.

Except it’s not. And it doesn’t.

The Trump administration will send its third budget to Congress on Monday. As in previous years, the document will land with a thud.

In Washington-speak, it will be dead on arrival. (More about that later.)

A few details have leaked out about the Trump spending plan, which was delayed because of the record-setting 35-day government shutdown. The president said last fall he  would ask every Cabinet head to prepare for a 5 percent spending cut.

“Get rid of the fat, get rid of the waste,” he said at a Cabinet meeting. “I’m sure everybody at this table can do it.”

Everybody but the Pentagon, apparently. The Hill reported that the military will be spared from the budget ax. 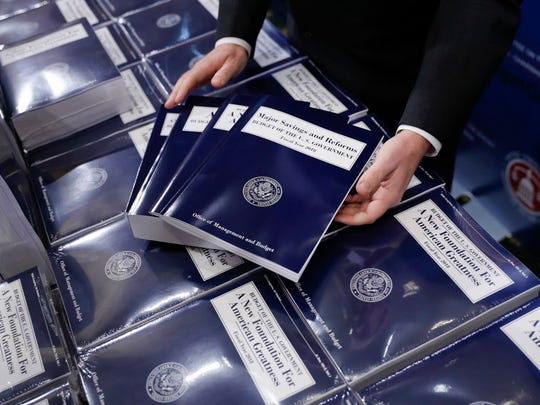 Congress gets its say

One of the big ways the federal budget differs from your household spending plan: You and your family develop your budget without seeking input from 535 other people.

That’s not how it works in Washington.

The budget the president sends to Congress is just a starting point, a way for the administration to spell out its spending priorities for the coming year. Lawmakers have their own ideas about how federal dollars should be spent, and since they seldom line up closely with the president’s vision, Congress usually shelves the president’s budget proposal and writes its own.

The process becomes even more complicated when an opposing party is in charge, as it is this year. Democrats led by Speaker Nancy Pelosi control the House for the first time in eight years, while Republicans still hold the Senate and the White House.

The president’s budget is usually  DOA the moment it reaches Congress. Given the power split, that will be especially true this year.

Options you don’t have with debts

The national debt surpassed $22 trillion for the first time last month, a milestone that experts warned is further proof the country is on an unsustainable financial path.

To put that amount into perspective: The median U.S. household income was $61,372 in 2017, according to the Census Bureau. If every American man, woman and child earned that median wage and gave every penny of it to the government, the total still wouldn’t pay off the national debt.

The federal deficit – the gap between the government’s income and expenses – grew by 77 percent over the first four months of the current fiscal year. It’s likely to total $900 billion this fiscal year and hover near or above $1 trillion for the next decade, up from $779 billion last year.

About 40 percent of the increase can be traced to the sweeping $1.5 trillion tax cut that Trump spearheaded and that took effect last year, as well as a two-year budget deal that increased government spending by about $300 billion. Growth in Social Security, Medicare and other expenses also swell the deficit.

Many struggling Americans are forced to contend with their own budget deficit and are  deep in debt. Americans owe a record $1.04 trillion in credit card debt – up from less than $854 billion five years ago, according to the Federal Reserve. On average, Americans owe $6,354 on bank-issued credit cards.

But the federal government has options that average Americans don’t.

If it needs more money, it can raise taxes. If it needs to borrow, it can get much lower interest rates than consumers can. If it hits its borrowing limit, it can simply raise that ceiling.

Individual Americans eventually have to pay off their creditors. When you die, your estate settles your debts. Since the federal government doesn’t go away, neither does its debt. It lives on and keeps accumulating.

More: Don’t make these financial mistakes: 10 ways you should never use your credit card

Cash may be king, but if that’s true, then credit cards are the ace.
Buzz60

Why you should care

For average Americans, the federal budget deficit may seem like a massive abstract number that has no effect on their daily lives.

It does. Or at least it can.

Higher deficits could drive up borrowing costs for U.S. households and businesses. When the government borrows money to pay its bills, it issues Treasury notes. As the supply of Treasurys increases, their prices fall and yields rise to attract more buyers, assuming demand is steady. Those higher rates can ripple across the economy, nudging up rates on mortgages and other loans.

The big caveat: Though Treasury rates have ticked up as the deficit has widened, they’ve remained at historically low levels (currently about 2.6 percent). That’s because in an uncertain global economy, Treasurys are viewed as a safe bet. While countries such as Turkey, Argentina and Italy face financial crises, no one expects Uncle Sam to default on debt.

That means the federal government can run up outsize deficits far more easily than ordinary households, which would face credit limits and higher interest rates if they did the same.

That may not always be the case, especially if $1 trillion deficits continue to pile up and Congress takes no steps to trim them over the longer term. If investors start worrying about that, Treasury rates – and borrowing costs across the economy – could begin to edge higher.

Another reason to fret about the deficit: If the economy slides into another recession, which many analysts predict by 2020, Congress may be less likely to pass a big stimulus to help pull the country out of the doldrums if the package adds to an already-yawning budget gap.

More: 15 ways to make your savings last in retirement and keep pace with inflation

Yes, the national debt affects you

One of the many ways it impacts you is how much you earn.

Debt not only suppresses economic growth, it suppresses future wages. The Congressional Budget Office projects that average income in 30 years will be $5,000 less per year if the national debt continues its trajectory.

That means average income for a family of four will drop by $16,000 over the next three decades if debt rises as projected, according to the Peter G. Peterson Foundation, a nonpartisan organization dedicated to addressing the country’s long-term fiscal challenges.

If that happens, you’ll have less money to spend on necessities such as food, gas and clothing or to put extra money in your savings account or 401(k).

Rising debt and deficits can lead to higher interest rates. Higher interest rates mean it will cost more to borrow money to buy a house or a car. Paying for college tuition or starting your own business will become more expensive.

Higher interest rates affect credit card purchases, so expenses such as buying gas or groceries or even going on vacation will cost more.

Programs such as food stamps and unemployment benefits that help the most vulnerable in society could face cuts if the government has less money to spend.

It may be more difficult to prop up financially strapped programs such as Medicare, which is projected to run out of money by 2026, and Social Security, which is likely to be insolvent by 2034, unless benefits are cut or other steps are taken to shore up the programs.

“The deficit should matter to anyone who cares about the future of America,” said Michael A. Peterson, CEO of the Peterson Foundation. “High and rising debt hurts our ability to build the future we want for the next generation because interest costs have become the fastest growing part of the federal budget.”

Peterson said that in a few years, interest will exceed what the government spends on children or defense, and it will total $7 trillion over the next 10 years. “That’s not good for the budget, our economy or our nation’s many priorities,” he said. “Failing to manage this debt problem now makes it harder for all Americans down the road.”

If the United States continues on its trajectory, interest payments on the national debt will amount to the single largest government program within three decades, according to the nonpartisan Committee for a Responsible Federal Budget.

More: The national debt and the federal deficit are skyrocketing. How it affects you

5 Amazing deals you can get right now