The Diamondbacks have agreed to terms on a one-year contract with free-agent outfielder Adam Jones, according to a source, a signing that gives the club a veteran option at all three outfield positions.

The contract, which is worth a guaranteed $3 million, will become official once Jones passes a physical.

Jones, 33, is a five-time All-Star and four-time Gold Glove award winner, but he has seen his offensive production and defensive value fall off in recent years. He hit .281 with 15 homers and 63 RBI last season for the Baltimore Orioles, for whom he played the previous 11 years.

Jones has played almost exclusively in center field throughout his career but was moved off the position last August, when he began seeing time in right field and eventually played some in left field in September. He is expected to float between all three positions with the Diamondbacks. 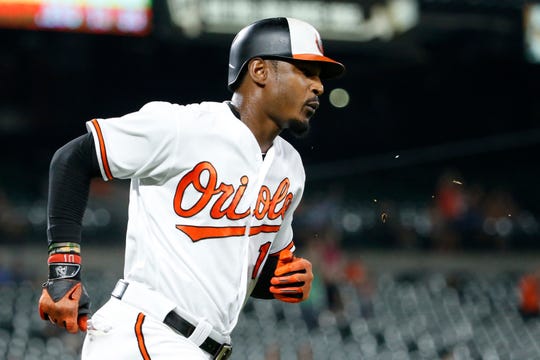 The signing frees up the versatile Ketel Marte to shift into more of a super utility role, in which he will get regular at-bats at multiple positions. Marte still is expected to play occasionally in center field.

More: Brewers players consider Bob Uecker one of their own, including divvying up playoff money

MLB promotions: The best giveaways for each team in 2019 season

Brito, who is out of minor-league options, entered Sunday just 5 for 30 (.167) so far in spring training.

Jones was once regarded as one of the better center fielders in baseball. He hit 20 homers or more in seven consecutive seasons, a streak snapped last year, and won three consecutive Gold Gloves from 2012-2014.

Though he regularly makes highlight reel plays, his defense rarely has been viewed in a flattering light by advanced defensive metrics. He routinely rated as a negative defender according to both Ultimate Zone Rating and Defensive Runs Saved, both of which saw him fall off significantly in center field over the past two seasons.