Apple Pay, Google Pay, Samsung Pay, Cash App, Venmo and PayPal make it less of a disaster if you forgot your wallet at home.
USA TODAY

I haven’t had a nickel, dime, quarter or penny in my pocket for two years. I’ve got $20 stuffed behind my iPhone, just in case, but rarely, if ever, reach for it.

Why bother? We’re now living in what’s quickly becoming a cashless society, where credit cards or electronic payments on your phone rule.

As I don’t live in an area where exact change is needed for the morning bus ride, I’m in great shape. I never have to worry if I have enough money on me to get through the day.

Just don’t tell that to the mayor of Philadelphia. 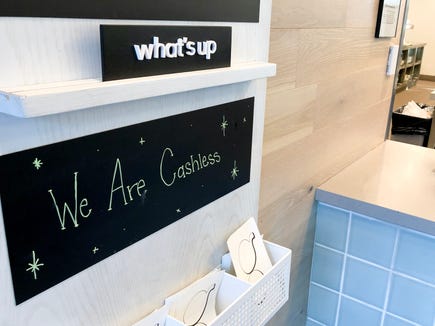 This week, Jim Kenney signed off on a new law that specifically outlaws stores that don’t accept cash. That includes the Amazon Go stores, which require an app to gain entrance and have no cash registers. The store cameras and sensors watch you shop and add your goods to the bill, via an e-mail receipt that arrives after you leave.

Mr. Mayor. It’s happening all over the world, and not just from Amazon. We are going cashless. Maybe not in your lifetime, but certainly for millennials. Banks and credit card companies want this to curb the costs of handling green. Selected merchants are into it now.

The Tender Greens chain of healthy restaurants, operating in California, New York and Boston, stopped accepting cash in 2018. “Over the years, we’ve noticed the percentage of our cash transactions drop significantly – into the single digits,” the company notes on its blog.

“It seems that people are moving away from cash and technology is making it easier than ever to tap and go.” Advantage: faster checkout lines, and the elimination of fees for armored car cash pickups and fear from employees about getting robbed.

That said, the mayor’s reasoning is sound. He said cashless stores exclude poor people who don’t have the credit to get a credit or debit card. I understand that.

Does that mean they also can’t afford a smartphone? Imagine living life in today’s world without one of those. (OK, that’s another story. And speaking of our great work here at USA TODAY, Edward C. Baig weighed in on the demise of the physical wallet this week.)

So let’s say one had enough money to cobble together $89 to pick up an Alcatel Tetra from the Mint Mobile website and had a bank account. May I point out that smartphone pay services like Venmo can be linked to your bank? No credit card needed.

USA TODAY’s Charisse Jones discovered that cash purchases were down to 30 percent of all retail transactions as of last year compared to 40 percent in 2012. Millennials, she noted here this week, are saying no to cash, with 21 percent of those 23- to 34 years old saying that most of their transactions were in cash in 2016.

And it’s not just here. In China, the supermarket chain Hema opened by saying it would accept only mobile payments via Alipay, from e-commerce giant Alibaba. (The company had to retreat when seniors complained to the government.) Still, according to a study reported by the Nikkei Asian Review, some 98 percent of folks who live in urban China environments purchase with mobile pay.

In Sweden, folks take the cashless shift so seriously many banks have stopped carrying cash. An IKEA store is testing the cashless concept in Gavle, north of Stockholm. Sweden is the country where many citizens have agreed to have microchips embedded in their bodies to assure speedier cashless mobile purchases and transit tickets.

Mobile pay is still a sliver of overall retail sales, but it’s definitely on the rise. Target, a long holdout, just added Apple Pay to one of its options, following in the footsteps of Best Buy, CVS, Costco and other retail giants who now accept payment via iPhone. The big, lone holdout right now is Walmart, the No. 1 retailer.

It does have its own mobile pay app, that links bank payments to QR codes.

And Mr. Mayor, good news for you. Walmart still accepts cash, too.

But for how long?

A year after Amazon opened its first cashier-less store, startups and retailers are racing to get similar technology, letting shoppers buy groceries without waiting in line. (Feb. 8)
AP

In other tech news this week

Facebook co-founder Mark Zuckerberg announced a new “privacy” focus for the social network,by combining Messenger, Instagram and WhatsApp. Under the new infrastructure, the three applications would remain distinct while allowing users to chat with one another, regardless of their platform. Zuckerberg said in a blog post that he believes that private, encrypted communication will be the most popular way that people interact in the future. “As I think about the future of the internet, I believe a privacy-focused communications platform will become even more important than today’s open platforms,” Zuckerberg wrote. “I expect future versions of Messenger and WhatsApp to become the main ways people communicate on the Facebook network.”

Apple CEO Tim Cook had fun with President Donald Trump’s mishandling of his name, calling him “Tim Apple,” by changing his Twitter handle to just that. The twitterverse ate it up.

Amazon pulled the plug on 87 of its pop-up stores. The stores within a store at Kohl’s and Whole Foods will shutter soon, as the e-tailer puts its efforts behind opening more of the Amazon Books and 4-Star stores, which emphasize Amazon products.

Speaking of Amazon, ICYMI, we did a Talking Tech deep dive this week on two really cool new products that bring Alexa into the car. The Roav Viva ($49.99) and Garmin Speak (starting at $99) plug right in, access the internet from your smartphone, and now, truly hands free, you can ask Alexa for on-command music, news and podcasts, what’s on your calendar and weather radar, and most importantly, be able to use your voice to find a nearby gas station. No car should be without one unless you can do all this with your current system.

What video camera should I buy for vlogging?

“Alexa, what can you do in the car?

We had another wet week in Los Angeles. So naturally, I was out with my camera again. The joys of photographing in the rain? See below.

That’s it for this week’s Talking Tech news wrap. Please subscribe for your weekly update, http://technewsletter.usatoday.com. Listen to the daily Talking Tech podcast on Apple Podcasts or wherever you listen to online audio, and follow me (@jeffersongraham) on Twitter, Instagram and YouTube.

Star Wars: Galaxy's Edge at Disneyland: Get a reservation