There is such a thing as wedding fatigue. Just ask Nick Jonas who married Priyanka Chopra in a flurry of pre-rituals and ceremonies in December.

There was a lavish Indian ceremony at the Taj Umaid Bhawan Palace in Jodhpur, India, and a Christian ceremony, the culmination of three days of wedding festivities.

During Thursday’s “Carpool Karaoke” segment with the Jonas Brothers, James Corden strapped Nick up to a lie detector machine and asked about the many events.

“Was there ever a point during your many weddings that you thought, ‘I’m done with these weddings?'” asked Corden.

“Yes,” said Nick, falling into giggles (the statement was confirmed to be true). 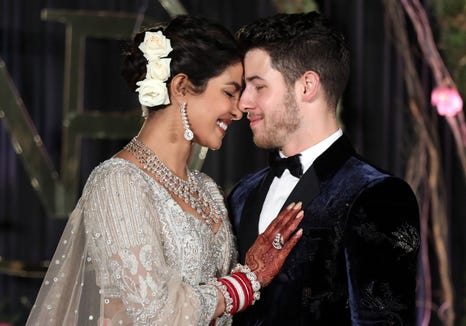 “It was when I looked at the bill,” he explained.

Kevin was also put under the spotlight and asked if at any point during his brother’s wedding if he wondered: “How much longer is this going to be?”

The “Carpool” session was also a comical therapy session, making light of the actual therapy the brothers underwent before coming back together as a band.

“In that process we did some very necessary healing, when things ended it wasn’t the best,” said Nick. “There was a magic when we were together that we would all love to feel again.”

Nick admitted he was a big part of the band originally breaking up in 2013. But now there’s a Jonas Brothers comeback album and a hit first single “Sucker,” which was released on March 1.

“I broke the band up, but I got ‘em back together,” said Nick.