The tornado that ripped through parts of Alabama was the deadliest in the U.S. since May 2013, when a tornado killed 24 people in Oklahoma.
Wochit, USA TODAY

The violent, devastating tornado that roared through eastern Alabama on Sunday was unusual for its for its extreme size, strength, and duration – all of which contributed to its tragically high death toll of 23 people.

At one point Sunday as it tore across the countryside of rural Lee County, the twister stretched for nearly a mile. That’s a whopping four times wider than the average tornado, which typically measures about 300-500 yards across.

“It was almost a mile wide, a monster storm as it moved across the area,” National Weather Service meteorologist Chris Darden said.

When surveying the destruction, Lee County Sheriff Jay Jones summed it up this way: “It looks almost as if someone took a giant knife and just scraped the ground. There are slabs where homes normally stood.”

With a wind speed estimated at 170 mph, it was also stronger than any twister that hit the U.S. all of last year, the National Weather Service said. 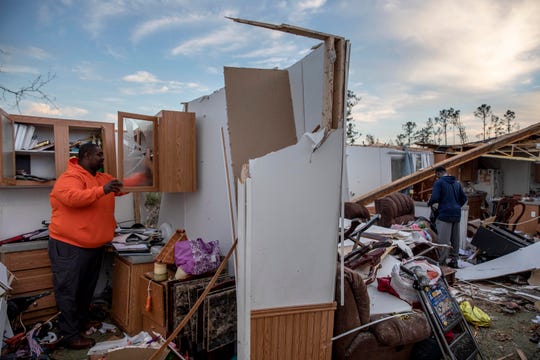 Surveys of the destruction indicated the tornado was an EF-4, the second-highest level on the Enhanced Fujita Scale of Tornado Intensity. Sunday’s twister was the first EF-4 tornado to hit the U.S. since one that hit Van Zandt County, Texas, on April 29, 2017.

Only a small fraction of tornadoes in the U.S. hit such extreme speeds. In fact, roughly 80 percent of all U.S. tornadoes are weak EF-0 or EF-1 tornadoes, which have winds of 65 to 110 mph, the Storm Prediction Center said.

More: ‘I thought I was gone’: This Alabama woman didn’t think she’d make it out of the tornado alive

The winds in EF-4 tornadoes can cause “devastating” damage, including the leveling of well-constructed homes.

Sunday’s tornado was also on the ground for a total 70 miles – 26 in Alabama and 44 in Georgia. That’s an incredible 20 times as long-lasting as a typical tornado, which is on the ground for only about 3.5 miles. 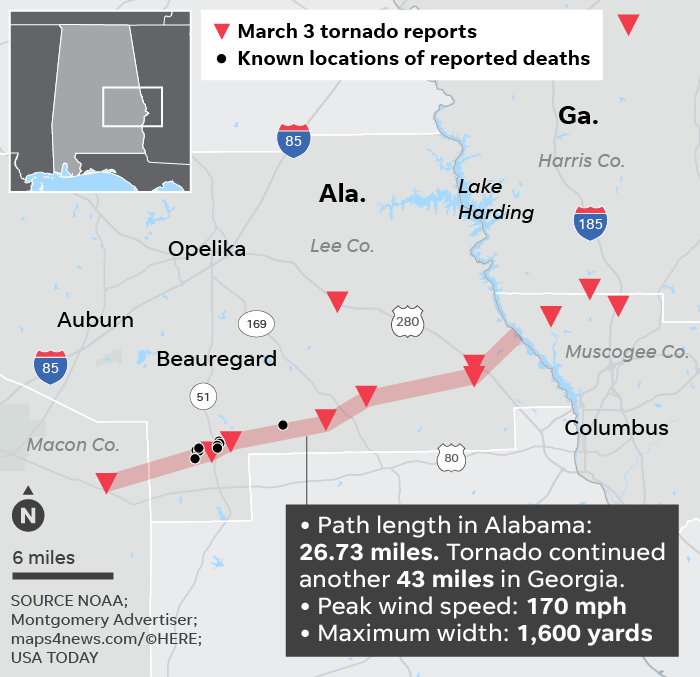 At 70 miles, the twister also traveled one of the longest distances ever to track through Alabama. That distance approaches the 81-mile track of a twister that killed more than 60 people and demolished much of Tuscaloosa, Alabama, in a “super outbreak” of several long-lasting tornadoes across the South on April 27, 2011.

The 23 people killed made it the USA’s deadliest in six years, since May 2013. That’s when an EF-5 tornado killed 24 people in Moore, Oklahoma.

More: People in path of deadly, 170 mph Alabama tornado had about 9 minutes warning

Carol Dean found her wedding dress Monday among the wreckage of her mobile home in Beauregard, a small community in Lee County that sustained the worst damage. But the storm took her husband. “My life is gone,” she said. 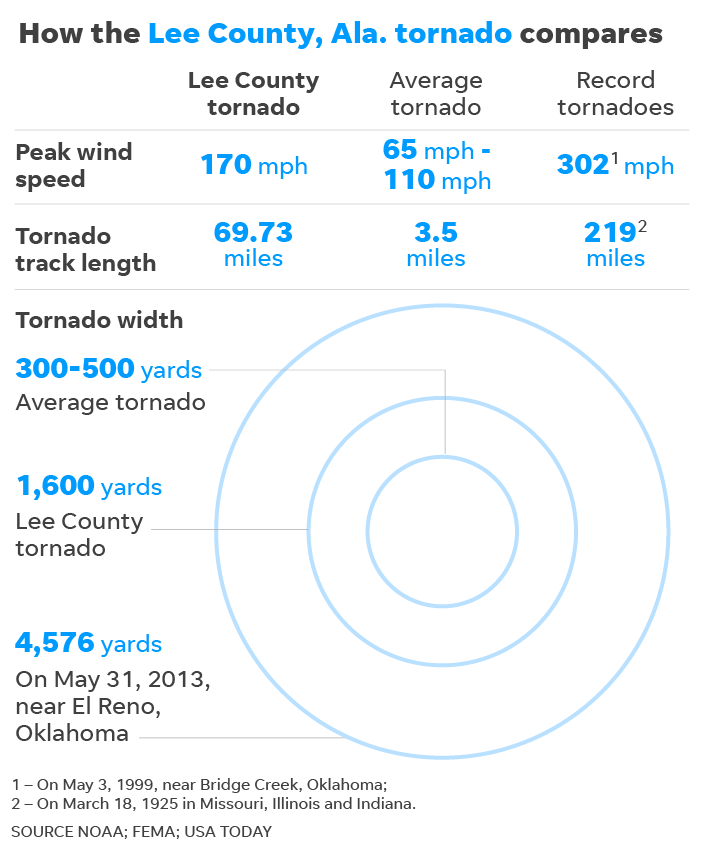 The number of people killed – who ranged in age from 6 to 89 years old – was more than double the total number of tornado-related deaths across the United States in all of 2018, which was only 10, the lowest number ever recorded.

“I’m still thanking God I’m among the living,” said John Jones after the tornado hit. Jones has lived most of his life in Beauregard.

More severe weather – including the chance for tornadoes – is forecast for parts of the southern U.S. on Saturday.

The royals, carnival and a crowned sifaka: World in Photos, March 5 Video

Flights from Everett, Washington, have begun