The former reigning queen of daytime TV is lending her support to Michael Jackson’s accusers with “Oprah Winfrey Presents: After Neverland,” which premieres simultaneously  on HBO and OWN Monday (10 EST/PST) immediately following the second and final part of HBO’s “Leaving Neverland,” which makes explosive claims of child sexual abuse against the late King of Pop. The claims have all been vehemently disputed by his estate.

The one-hour special features interviews with Winfrey and alleged Jackson victims Wade Robson and James Safechuck, as well as the documentary’s director Dan Reed. It was taped Wednesday night in front of a New York audience that included more than 100 people who have claimed they were sexually abused as children.

With 217 episodes of her long-running talk show dedicated to the topic, “I tried to get the message across to people that sexual abuse was not just abuse, it was sexual seduction,” Winfrey said. “I know people all over the world will be in an uproar and debating whether or not Michael Jackson did these things, whether these two men are lying. But to me, this moment transcends Michael Jackson. It’s bigger than any one person.”

More: ‘Leaving Neverland’: All the controversies before the documentary’s premiere

Among the most memorable takeaways from Winfrey’s conversation:

A “machine” of people covered up Michael Jackson’s alleged abuse

Robson, 36, and Safechuck, 41, each allege that Jackson molested them for several years until they were 14, primarily at his Neverland Ranch in California. Winfrey asked whether they believe Jackson’s staff was aware of the alleged abuse of young boys who slept in his bed. (Jackson’s former maid previously testified in court that she saw him showering with a young Robson.)

“It was very rare that Michael was alone,” Robson said. “He had a machine around him at all times. Secretaries organized most of my phone calls and cars to pick me up to bring me to him. Security guards were always there outside of the door. There were so many people around.

“There’s no way that Michael could have abused at the level that he did and the number of kids that he did without a machine behind him helping him do that,” he added.

Jackson trained them to be his “soldiers”

Several times throughout the conversation, Winfrey grilled Robson about why he previously denied Jackson ever sexually abused him: first in 1993, when the pop star was accused of molesting 13-year-old Jordan Chandler; and again in 2005, when he testified on the pop star’s behalf in the case of 12-year-old Gavin Arvizo. (Jackson was acquitted of charges in the Arvizo trial and settled the Chandler case out of court.) 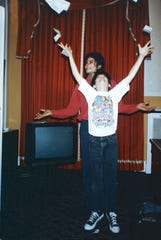 Michael Jackson and a young James Safechuck, who alleges that the singer molested him from age 10 to 14. (Photo: HBO)

Both times, “I was so narrowly focused on my training to be a soldier for Michael and protect him. I couldn’t think about anybody else,” Robson said. But in retrospect, “I wish I could’ve been ready to give Jordan and Gavin some validation and justice, and play a role in stopping Michael at that point.”

“I want to get on the stand again”

Jackson’s brothers have repeatedly claimed Robson and Safechuck are merely in this for financial gain, after their lawsuit against the singer was dismissed in 2015 because the statute of limitations had expired. But Robson told Winfrey that money “isn’t a thought of mine,” and the reason they are appealing the court’s decision is to heal.

Since he first came forward with his allegations in 2013, the question has been, “is there a place where I can tell this story that would be a credible, powerful platform where the estate would have to be held accountable?” Robson said. “One of the platforms we have is the legal system.

“Michael forced me to tell the lie for so many years, particularly on the stand, and those were really traumatizing experiences for me that had a huge impact on the rest of my life,” he continued. “The feeling was, I want an opportunity to reprocess that experience. I want to get on the stand again, because I’m now able to tell the truth.”

Winfrey dedicated much of the interview to the misconceptions about child sexual abuse, namely that “everyone wants to believe it’s like sexual assault, when you’re being thrown against the wall and raped,” she said. “But I have said for years, if the abuser is any good, (the victim) won’t even know what’s happened.”

She asked Safechuck and Robson at length about the details of Jackson’s alleged grooming process: how he formed close friendships with them and their families, and told the boys he loved them.

“He would make me and my mother feel that we were also saving him, giving him a life that was outside of his lonely existence,” Robson explained.

“He would do a lot of crying,” Safechuck added. “He would put on what I now see is an act, saying that he just felt too much. You wanted to be there for him.”

More than two decades after the alleged abuse ended, Safechuck said he still feels traumatized, and says it will be a lifelong process of trying to forgive himself, Jackson and his own mother, who allowed her son to stay with the pop icon unsupervised.

“You know what’s strange? I felt guilt this weekend, that I had let (Jackson) down” by coming forward with allegations, Safechuck said. “It’s still there.”

Why are so many women who suffer from eating disorders overlooked? Video