LeBron James is in serious danger of missing the playoffs for the first time in 14 years.

His Los Angeles Lakers are in 10th place in the Western Conference, and even after Wednesday night’s win over the hapless New Orleans Pelicans, they find themselves three games behind the eighth-place Los Angeles Clippers.

In other words: There’s little room for error in these final 21 games.

With the final stretch of the 2018-19 NBA regular season upon us, USA TODAY Sports’ Jeff Zillgitt, Martin Rogers, AJ Neuharth-Keusch and Matt Eppers take a look at three of the league’s burning questions in this NBA roundtable. 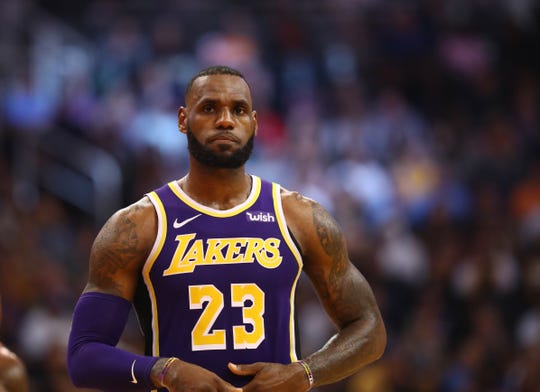 Is LeBron missing the playoffs bad for the NBA?

Zillgitt: In a word, no. And for a few reasons. Yes, LeBron brings in viewers, excitement and drama, and the playoffs will miss that if the Lakers don’t make it. But it’s not the end of the world if another team, such as the exciting and upstart Sacramento Kings, makes the playoffs instead. I’d actually rather see the Kings in the playoffs than the Lakers. In the big picture, this would allow the Lakers to put this laborious season in the past and allow James to get some much-needed rest. He’s made it to eight consecutive Finals – packing in two more seasons worth of games – and missing the playoffs would be good for him and the Lakers headed into next season, when they should have a different roster.

Rogers: If it happens, and it looks increasingly likely, it wouldn’t be bad at all. The league’s marketing is superstar driven and that approach has brought great success, but the on-court product needs to be one that rewards excellence and punishes inadequacy, no matter who it is from. Fact is, the Lakers – barring a late revival – haven’t been good enough. And James hasn’t shown the kind of leadership to deserve a spot. If anything, it adds a bit of variety.

Neuharth-Keusch: From a viewership perspective, sure. LeBron is the second-biggest name in the world of sports, and he and the Lakers dominate the headlines and the ratings. A Lakers-Golden State first-round series would be record-breaking. But from a pure basketball perspective? No. The young Kings haven’t made it to the postseason since 2006, while the Clippers (who are supposed to be tanking) are one of the grittiest teams in the league. I’d rather see them have a shot than a Lakers team that has played uninspired basketball for most of the season.

Eppers: From the league’s perspective, it wouldn’t be catastrophic, but it would be a moderately bad look. LeBron is arguably the biggest star – not necessarily the best player – the NBA has ever had. Having him leading one of its marquee franchises in the postseason is undeniably preferable, no matter how much I like the Kings. LeBron has a legion of die-hard fans that will tune in, and plenty of people enjoy hate-watching him. From the Lakers’ perspective, though, missing out might not be that bad at all.

Are the Celtics too far gone?

Zillgitt: I hate to deal in absolutes. I’ve covered this league long enough to see enough (a team came back from a 3-1 deficit to win the NBA Finals!), and I don’t want to write the Celtics off until they lose four games in a playoff series. But … things don’t look good. The Celtics have not responded well to expectations this season, and there appears to be a divide between veterans and younger players and a lack of trust that prevents the team from reaching those expectations. As it stands now, Boston will not have home-court advantage in the playoffs, and it will be difficult to win that way. It has been a disappointing season, but I’ll say there is time (not much though) for the Celtics to get this right. 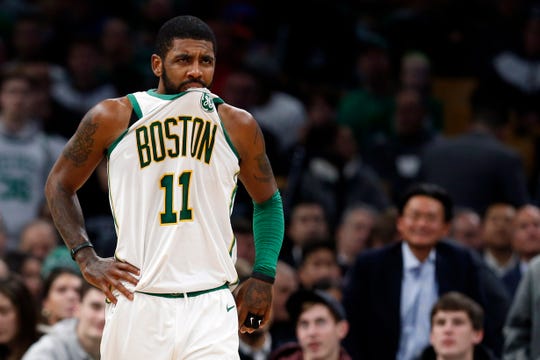 Rogers: Not at all. The final weeks of the regular season are a weird kind of cycle in the Eastern Conference, with Boston realistically unable to fall below fifth and highly unlikely to get above fourth. As we saw last season, the Celtics have players capable of rising to the occasion when it matters, with Jayson Tatum being the prime example. What kind of momentum they generate early in the playoffs will be far more important than all the chaos right now.

Neuharth-Keusch: Four consecutive losses, barbs through the media and a tough remaining schedule all point to this Celtics team completely imploding before April rolls around. But I still have faith in them — albeit much less than I did in October. The talent is there, both on the court and on the sidelines, and they still have over a month to right the ship. It’s not a matter of if they can. It’s a matter of if they will.

Eppers: They’re definitely too far gone to win the title, likely too far gone to win the East, and teetering on the edge of being too far gone to even make much noise in the playoffs. And it’s only partly due to the dysfunction in their locker room. Boston will have a tough time climbing into the top four in the conference and thus likely won’t have home-court advantage. The Celtics have seemingly had Philadelphia’s number, and Indiana will have trouble without Victor Oladipo come playoff time. But Milwaukee and Toronto are just better, and I don’t envision the Celtics beating either in a presumptive second-round series.

Will anyone ever come close to matching James Harden’s scoring streak? If so, who?

Zillgitt: Yes, of course. We’re not talking Wilt Chamberlain’s 100-point game here. There will be a player who matches and surpasses Harden’s scoring streak (32 consecutive games scoring 30 or more points). As for the who: Who do you think I am, Nostradamus? Maybe LeBron James Jr.? Maybe a player who hasn’t been born yet? If you want me to name a current player, I could see Kevin Durant doing it under perfect circumstances – certainly not with Golden State. Such a streak requires a player who can score in a variety of ways. That eliminates a lot of high-scoring guards who are more likely to have an off night from 3-point range. Perhaps Giannis Antetokounmpo, Anthony Davis or Joel Embiid, if they improve their 3-point shooting. 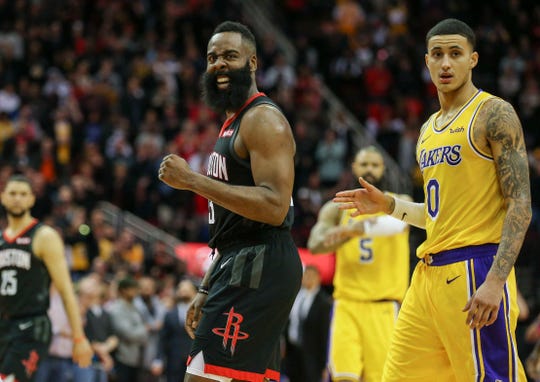 Rogers: Yes, but it is possible they are still in kindergarten. Harden’s run required a set of circumstances that will be hard to replicate. It took a uniquely talented scorer exploiting a period of shifting NBA rules and taking advantage of a system which makes effective defending fiendishly difficult. Even then, Harden still probably wouldn’t have taken that incredible run to such an amazing length if Chris Paul’s injury hadn’t forced him to bear the entire brunt of the offense.

Neuharth-Keusch: It’ll be hard for anyone to match it, but certainly not impossible. His usage rate (41.1) during his streak was otherworldly (due in large part to the absence of Paul and Clint Capela), as were his shot attempts (27.2 per game). A few players in the league today — namely Stephen Curry and Durant — are capable, but they’re surrounded by so much other talent that it’s not necessary. It’ll happen, but it might not be for a long, long time.

Eppers: Harden’s streak seemed impossible until he did it, so it would be foolish to say it won’t ever be duplicated. It will be very tough to match, though, especially since so many of the game’s best scorers are becoming more and more reliant on the 3-point shot. One off night from long range will submarine a 30-point streak real quick. My best bet is Antetokounmpo. He gets to the bucket in a variety of ways with relative ease, and he’s nearly automatic once he’s within seven or eight feet. And if he improves his outside shot, look out.

Best Netflix shows, movies for kids and families to watch in March