GREENVILLE, S.C. — Army veteran Jared Johns was the target of a “sextortion” scam by prison inmates in the hours before he killed himself in Greenville on Sept. 11, 2018, according to his parents. They shared records with The Greenville News that appear to corroborate extortion attempts through text messages.

Kathy Bowling and Kevin Johns believe that inmates at Lee Correctional Institution tried to bilk their son out of $1,189 while posing as the parents of a 17-year-old girl who purportedly sent him illicit photos.

Jared Johns, 24, suffered from post-traumatic stress disorder after serving in Afghanistan, and the condition left him unable to cope with the threats that he received in the moments leading to his suicide, his parents said.

“I feel like they’re the ones who shot him,” Kevin Johns said.

“My son should still be alive,” Bowling said.

Bowling and Kevin Johns said they met this month with a Greenville police detective who is investigating the case.

Police Lt. Jason Rampey offered few details but confirmed there is an investigation to determine whether inmates at a South Carolina prison were communicating with Jared Johns.

Jared Johns’ parents said he had joined the online dating service PlentyofFish.com. They believe his profile on that website led to him being contacted by the inmates.

Opinion: I survived combat in Iraq and a suicide attempt at home. But many veterans aren’t so lucky.

The details of the apparent scam targeting Jared Johns appear similar to the tactics allegedly used by five South Carolina inmates and 10 accomplices who were indicted by a federal grand jury last fall. That scheme victimized 442 military servicemen from around the nation and netted more than $500,000 between 2015 and early 2018, according to federal authorities.

According to the indictments, the inmates used contraband cellphones to visit online dating sites posing as women to lure servicemen, eventually sending them nude photos and asking for naked pictures of the men. Then people posing as irate fathers contacted the servicemen and told them the women they sent photos to were juveniles. The alleged schemers demanded money or threatened to notify authorities. 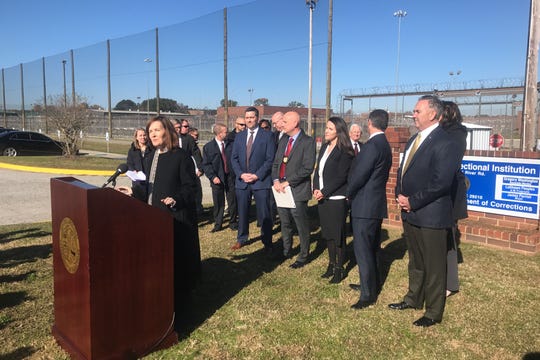 According to Bowling, a woman whom her son was dating said Jared Johns spoke on the phone with a person posing as a Greenville police officer on the night before his suicide. The person who called him said he had been contacted by the parents of a 17-year-old girl who sent illicit photos to Johns.

Johns also spoke on the phone that night with a man who identified himself as James Harris, Bowling said. He exchanged text messages with that person as well as a person claiming to be Harris’ wife.

Bowling provided The Greenville News with images of Jared Johns’ text-message exchanges and a screenshot of his call log.

The person claiming to be Harris’ wife appeared to send Johns images of texts showing a conversation between him and a girl identified as her daughter. In the texts, the girl says she will turn 18 “in a few weeks.” Johns mentions that he is an Army veteran and the father of two children.

The texts don’t appear to include any requests for photos. Johns’ parents said there were no messages from the girl or photos of her on their son’s phone.

“I really don’t remember talking to your daughter,” Johns wrote in a text to the person claiming to be Harris’ wife.

Johns asked for “proof” that he had asked the 17-year-old girl to send him photos.

“You know what you did,” replied the person claiming to be Harris’ wife. The person said that Johns should pay $1,189 to cover the cost of disconnecting and replacing the girl’s phone.

In a text message to the person identified as Harris, Johns wrote that he was “very confused” and he repeated, “I don’t remember talking to your daughter.”

“I really don’t hate it for you because you knew what you were doing,” the person identified as Harris wrote in a text with a timestamp of 11:59 a.m. “I hate it for your two kids.”

“So what are you saying?” Johns asked in a text.

The person identified as Harris responded that his wife “is going to the police and you are going to jail.”

Within minutes of that exchange, according to Greenville County Senior Deputy Coroner Kent Dill, Johns died from a self-inflicted gunshot.

Bowling said data from her son’s Apple Watch shows that his heart stopped beating at 12:03 p.m.

A reporter for The Greenville News called the phone number for the person identified as Harris, but a recorded message said the call was rejected. Text messages sent to the same number yielded no response. An internet search found no one named James Harris in South Carolina with that phone number.

The Greenville News also placed multiple calls to the phone number for the person claiming to Harris’s wife, and each time the line was busy. There was no response to text messages sent to the same number.

On the day of his suicide, Johns recorded a two-minute video while lying on his bed, which is where his body was found by his twin brother, Jacob. The brothers shared an apartment in Greenville.

“I messed up, and I’m so sorry,” Jared Johns says in the video. “I made some stupid mistakes.”

Kevin Johns and Bowling, who are divorced, each said they had no idea what their son was referring to until they saw the texts on his phone when authorities returned that phone to them in late September.

“They had convinced him that he had done something bad,” Kevin Johns said.

“I think the PTSD just took over,” Bowling said.

Jared Johns’ suicide came on the 17th anniversary of the terrorist attacks in New York City, Washington and Pennsylvania that convinced him to grow up to be a soldier, according to his parents.

“He knew on 9/11, the day it happened, that he would be a soldier and that he would go and fight as soon as he could,” Bowling said.

Kevin Johns said he learned that his son attempted suicide by taking pills while stationed in Germany. Jared Johns was recovering from a back injury that he sustained while dismounting from an armored vehicle in Afghanistan. Jared Johns returned to Greenville in October 2015 after receiving a general discharge under honorable conditions.

After waiting 18 months to start receiving disability benefits for his PTSD, Jared Johns had started to turn his life around, according to his parents. He was working as a manager at a local AT&T store and was excited about the birth of his younger son, Jaxson.

“It wasn’t that he was depressed,” Kevin Johns said. “My son was fighting PTSD, and he was really overcoming it.”

After seeing the messages on her son’s phone, Bowling sent a series of texts to the phone number for the person identified as James Harris. The texts included a photo of her hovering over Jared Johns’ casket and a link to an Oct. 10 story that The Greenville News published on his suicide.

“Shame on you and your wife and your daughter for doing this to him,” Bowling wrote in one of her text messages. “I hope he haunts you.”

“We had nothing to do with his death,” replied the person identified as Harris in a text message. The person eventually blocked Bowling’s number.

Three days after she sent her last text, Bowling received a Facebook message from a person who claimed to be the sister of an inmate at Lee Correctional Institution.

“He knows who caused your son to take his life, and he wants to help you,” wrote the person who claimed to be the inmate’s sister. “My brother says he has names for you.”

Kevin Johns said he spoke to the inmate, who told him that he had seen the photos that Bowling texted to the phone number that was used to communicate with Jared Johns before his suicide. But Kevin Johns said the inmate did not reveal the names of those involved in the scam targeting his son.

Bowling said she believes her son’s suicide could have been prevented.

“This is crazy,” she said. “This did not have to happen.”

My life with PTSD: Crowded concerts and intimacy can be triggers

People seeking help for themselves or others can call the National Suicide Prevention Lifeline at 1-800-273-8255. Among the warning signs of suicide are: talking about suicide, expressions of hopelessness, personality changes, depression or giving away possessions.Learn more about the resource at www.suicidepreventionlifeline.org.

Gonzaga passes Duke for No. 1 in men's college basketball poll

The Oscars, Carnival celebrations and a newborn giraffe: World in Photos, Feb. 25 Video