What I’m Hearing: USA TODAY Sports’ Bob Nightengale reveals that the San Diego Padres may have been the most shocked party when the news broke that Manny Machado would accept their offer.
USA TODAY

CLEARWATER, Fla. – Manny Machado will not walk through the doors at the Philadelphia Phillies’ spring training complex, and there was not yet a Bryce Harper signing, either, on a postcard-perfect Thursday morning.

Yet just because Machado agreed to terms on a free-agent record 10-year, $300 million contract with the San Diego Padres, and there’s a general presumption that Harper’s forthcoming deal will meet or exceed those terms, doesn’t mean players believe the system is functional.

Just 35 days before Opening Day, a group of 10 free agents ranging from elite to highly useful, headed by Harper and pitchers Dallas Keuchel and Craig Kimbrel, remain. Dozens of others lurk behind them.

And while the trickle of veterans finding jobs continues – second baseman Josh Harrison agreed to a one-year deal with Detroit on Wednesday – the rest are essentially in the dark. 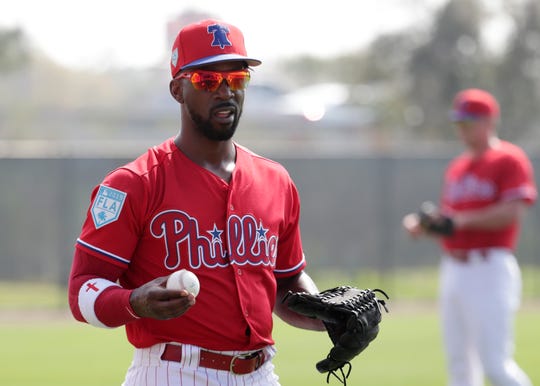 McCutchen jumped at the Phillies’ three-year, $51 million offer in December, knowing that the market for 32-year-olds is dimmed, even for a five-time All-Star who reached base at a .421 clip last season.

But McCutchen still feels for those without jobs even after every camp has opened its doors to full squads, and the industry revels in record revenues now exceeding $10 billion annually.

ALBATROSS: Do monster contracts pan out?

“There are just so many names out there. Big names,” McCutchen told USA TODAY Sports on Thursday. “Craig Kimbrel. Dallas Keuchel. A boatload of pitchers. Established names still not signed, trying to figure out, ‘What’s my value? What’s my worth?’

“You see that one side is making this much money, and the numbers continue to go up. I need to know what my value is. You’re trying to figure that out.

“That’s why there’s a halt. That’s why guys haven’t signed.  Guys figuring they’re worth this much, and the other side saying, ‘You’re not.’ It used to not be like that.”

While the baseball world fixates on Harper – and the presumption that the Phillies will be his ultimate destination – McCutchen can’t help but keep an eye on the rest of the market. He says it’s “crazy to me” that veteran outfielder Adam Jones – who would not require a significant commitment in years or dollars – does not have a job.

McCutchen’s gross earnings will ultimately top $100 million, and he’s not seeking any sympathy, to be certain. At the same time, players in his situation still have tens of millions of dollars at stake, and the nebulous notion of value – and the uncertainty it creates – produces anxiety, rather than anticipation.

“I used to feel like, early in my career, going into free agency was fun,” McCutchen says. “You got offers, and through those offers you were able to decide – where do I want to go? I can pick and choose where I go.

“It was never, ‘I really have to negotiate dollars, because they’re really down here, and I’m really up here.’Every person loves to be in that position, if you’ve thrown up good numbers going into free agency, you thought it was a fun thing.

“And then you get there and it’s not as fun as you thought it was.”

Like McCutchen, reliever Andrew Miller signed relatively early in free agency, receiving a two-year, $25 million deal Dec. 20. He told reporters Wednesday that the market is “much more than one player,” noting that Machado’s deal was a positive, but far from a panacea, given that so many players are forced “to play the long game,” he said, signing and reporting late while remaining largely in the dark through the winter.

A veritable All-Star team of players remain in that state, with available jobs diminishing and anxiety, presumably, rising.

“There’s some things there that make you think a little bit,” McCutchen says. “What position am I in? How’s it going to go? What teams are going to be interested?

“Will teams be interested, and if so, how much?”

McCutchen got his answer early. Dozens more remain in the dark.

World's largest bee discovered in Indonesia after missing for 38 years