Teachers in Oakland, California, plan to raise picket signs Thursday in the country’s latest strike by educators over classroom conditions and pay. The walkout will affect 36,000 students at 86 schools. (Feb. 21)
AP

OAKLAND, Calif. — More than 3,000 teachers and staff walked off the job and onto picket lines Thursday, claiming they are among the lowest-paid educators in the Bay Area and demanding a 12 percent pay hike over three years.

Waving signs and chanting bilingual slogans including “Up with teachers. Down with school closures” and “Education, not incarceration,” scores rallied outside Manzanita Community School on a sunny but chilly morning.

“Today is a historic day in the city of Oakland,” Oakland Education Association president Keith Brown told the exuberant crowd. “Teachers, educators are united with parents and students – and we are demanding that we have the schools our students deserve.”

The district’s final offer of a 7 percent raise over four years and a 1.5 percent bonus was not enough for Oakland teachers to live in the high-priced Bay Area, Brown said.

Brown said salaries now range from $47,000 to $84,000 depending on experience. According to an analysis from Zillow, an earner in the lower range would have to spend more than 90 percent of his or her monthly income to pay for the median mortgage in the typical Alameda County home, or about 80 percent for the typical monthly rent.

A neutral fact-finder recommended 6 percent over the first two years of the contract, and a third year the subject of further negotiation.

“Teachers are standing up and telling the Oakland Unified School District that it’s time to listen to parents and the community. It is time to reinvest in our public schools,’’ Brown told the crowd as passing drivers honked their support. “We cannot feed young minds and starve the schools out of essential resources.’’ 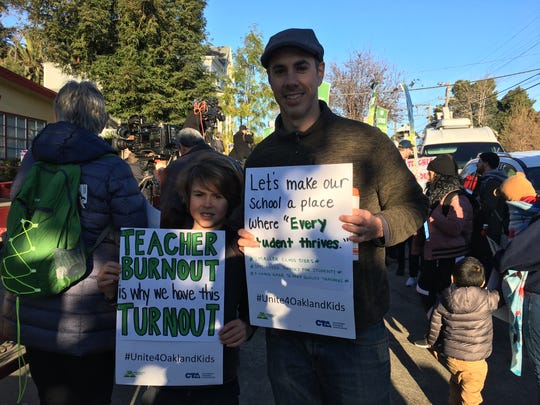 “They deserve a living wage and the tools they need to give our kids the very best education,” she said, adding that she was hoping for a “quick agreement” that would get the district’s 36,000 students back in class.

The teachers are the third group of public school educators from one of the nation’s 50 largest cities to strike this year after their Los Angeles and Denver counterparts. Chicago also had a charter school teachers’ strike.

Teachers across the state of West Virginia returned to work Thursday, ending a two-day strike. Union leaders there said they were confident lawmakers would not try to tie a raise for teachers to funds for the state’s first charter schools.

In Oakland, educators have worked without a contract since mid-2017 and want their pay raise retroactive. They’re also asking for more nurses, guidance counselors and other support staff and a halt to plans that could result in two dozens schools being closed.

Local pastor Patrick Vaughn and his third-grade son Whitworth joined the early-morning picket line to show solidarity. They are thrilled with the teachers at Manzanita SEED, a dual-immersion school on the same campus as Manzanita Community School.

Vaughn also has a kindergartner at the school, and he appreciates his kids growing up with a bilingual education. At 8, Whitworth understands Spanish well and has a better accent than his father, a Spanish major in college.

But Vaughn is concerned that so many teachers are leaving.

“To be a city that flourishes and thrives, we need to have good teachers, and teachers who stick around,’’ Vaughn said. “We’ve had a lot of turnover at our school in the four years we’ve been here. It’s understandable. Oakland’s such an expensive city to live in.’’

“It is not easy to be a teacher in a class with 25 wiggling first-graders on the run,” he said. “And to know in the back of my mind that the school is at risk of being closed down.”