But in a new interview with Variety, Paltrow says that getting the role and all the accolades that went with it meant she had to work for Harvey Weinstein again, just four years after she says he summoned her to his hotel room, placed his hands on her and suggested they head to the bedroom for massages.

Though Paltrow has said that Weinstein never sexually harassed her again (partially in thanks to then-boyfriend Brad Pitt threatening to kill him), the decision to work for him again was not one she took lightly.

“He was a very difficult boss,” she told Variety. “It was a fraught relationship. We would get in knock-down, drag-out fights.” 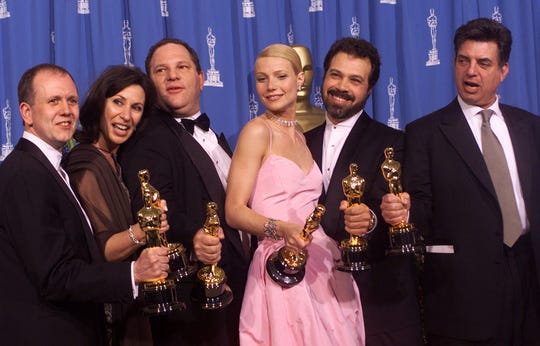 Paltrow, seen here celebrating the best-actress and best-picture wins for “Shakespeare in Love” at the 1999 Oscars with producer Harvey Weinstein, said he was a “bully” throughout their association. (Photo11: DAVE CAULKIN/ASSOCIATED PRESS)

For instance, she said she kept pushing him until he cut her a check for the back-end compensation she was promised for “Emma,” the 1996 Jane Austen adaptation he’d cast her in at the time of the hotel-room incident.

Eventually, she said, “I got him to pay me something. I remember I got this legal letter that said, ‘This is not an acknowledgment that we owe you this money, but here’s a check.’ ”

On the set of “Shakespeare in Love,” Paltrow said she had to personally intercede to  keep Weinstein from replacing the actor cast as William Shakespeare (Joseph Fiennes, then at the beginning of his career) with up-and-coming “Good Will Hunting” star Ben Affleck, who was later cast in another role. 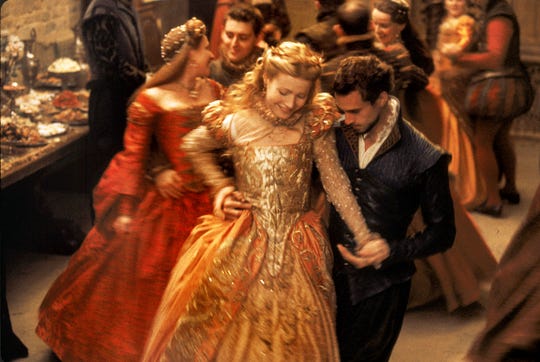 Can you picture this iconic shot with Ben Affleck instead of Joseph Fiennes? If Harvey Weinstein had gotten his way, it would look very different. (Photo11: LAURIE SPARHAM/MIRAMAX FILMS)

“I said, ‘No, you can’t do that,’ ” she recalled. “You have to have an English person.” (Fiennes would not learn about that conversation for years.)

Weinstein, who has never specifically addressed Paltrow’s original allegation about their hotel room encounter, did, however, issue a denial to Variety regarding her claim about him wanting to cast Afleck.

His representative, Juda Engelmayer, told the trade magazine, “The only other contenders for the role of Will Shakespeare were Russell Crowe and Ethan Hawke, no one else. Ben Affleck did a terrific job as Ned Alleyn, which is the role he was considered for.”

In the end, Paltrow said, “I never had a problem standing up to him. I wasn’t scared of him. I also felt for a period of time, I was the consumer face of Miramax, and I felt it was my duty to push back against him.”

Padres projected lineup, why San Diego is a good fit