“Happy Death Day 2U” follows college student Tree Gelbman, who again finds herself dying over and over until she can reveal her killer’s identity.
USA TODAY

Spoiler alert! We’re discussing the ending of “Happy Death Day 2U,” so beware if you haven’t seen it yet.

After dying over and over, again and again, in the course of two “Happy Death Day” slasher mash-up movies, college student Tree Gelbman is ready to pass the fatal baton to someone else for a change.

And the end-credits scene in the sequel “Happy Death Day 2U” sets up the inevitable threequel with a karmic choice.

The new “Death Day” finds Tree (Jessica Rothe) having to relive her birthday, stay alive with the baby-mask killer on the loose, and die so the day can reset in order to fix a time loop caused by the Sisyphus Quantum Cooling Reactor (aka “Sissy”), the college thesis project of Ryan (Phi Vu), dormmate of Tree’s boyfriend, Carter (Israel Broussard). 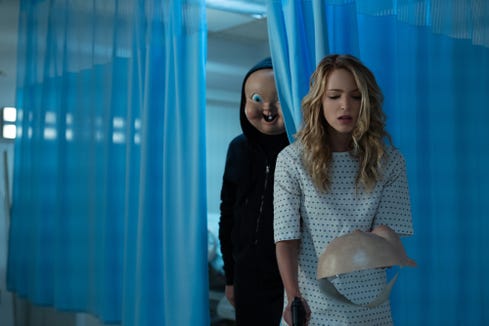 “Happy Death Day 2” finds Tree (Jessica Rothe) dealing with the baby-mask killer yet again but a threequel may put someone else in the hot seat. (Photo11: MICHELE K. SHORT)

This device was what caused the time loop in the first film and also the new one, which propelled Tree to an alternate dimension where her beloved mother was still alive and Carter was dating Tree’s mean-girl sorority president, Danielle (Rachel Matthews). She’s also revealed to be a big old cheater, in addition to being pretty much a horrible person in general.

Tree and her friends succeed and get Tree back to the present – after she said a final goodbye to her mom – but since they ran afoul of a college dean (Steve Zissis), they’re seen in an end-credits scene picking up trash as punishment when a bunch of black government-type vehicles show up. It turns out the Defense Advanced Research Projects Agency (aka DARPA, a real thing) is very interested in time-travel devices. They take the crew to a facility and are in need of a new test subject to see what Sissy can do.

“That’s pretty messed up,” Carter says, arguing someone should only get thrown into a time loop if they deserve it.

“I have the perfect recruit,” Tree counters. Cut to Danielle waking up screaming in her bed, presumably with a time-loopy comeuppance in her cinematic future.

The first “Happy Death Day” borrowed heavily from the “Groundhog Day” template and then went all-in for “Back to the Future.” What classic movie will inspire “Happy Death Day 3”? “The Terminator”? “A Christmas Carol”? “My Fair Lady”? At this rate, we’ll only have to wait another year and a half or so!