At a special 40th anniversary screening of their musical, John Travolta and Olivia Newton-John talk about when they realized “Grease” was a phenomenon, saying the response at the film’s London premiere was “like The Beatles’ arrival in the U.S.” (Aug. 16)
AP

A month after Olivia Newton-John’s health woes played out in headlines, her cancer battle takes center stage in a well-intentioned, if mawkish, TV movie and follow-up documentary.

Like countless other Lifetime biopics before it, “Olivia Newton-John: Hopelessly Devoted to You” (Saturday, 10 EST/PST), offers a Cliff’s Notes version of the Aussie’s career, from her shaky beginnings as a singer in London and Nashville to her iconic role as ingenue Sandy in 1978 movie musical “Grease” to her post-“Xanadu” years as a Grammy-winning pop star and activist.

The film shows Newton-John as a wife, mother and headstrong businesswoman, but also as an unflappable optimist – a side of her fans saw in early January, when she posted a cheerful video to Twitter squashing reports that she’s on her deathbed, following her third bout with cancer.

“I just want to say the rumors of my death have been greatly exaggerated, to quote a very famous quote,” she said. “I’m doing great and I want to wish all of you the happiest, healthiest 2019 that’s possible.” 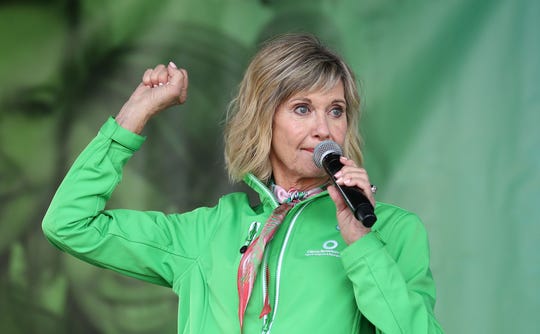 “Hopelessly Devoted” doesn’t include her breast cancer’s return in 2013 and 2017, but still gives ample screen time to her first diagnosis in 1992 and subsequent recovery. In a treacly bit of foreshadowing, Newton-John (played by Delta Goodrem, also a cancer survivor) comforts her daughter, Chloe (Lily Jones), whose best friend is terminally ill.

“Will you and Daddy get cancer?” Chloe asks.

“Of course not,” Newton-John promises, only to receive her diagnosis two scenes later.

There are other cringeworthy moments: As if we need yet another reminder that she’s a born musician, Newton-John weepily compares surgery to performing as she’s wheeled into an operating room. (“I feel terrified – like I’m about to go on stage.”) Her divorce from actor/dancer Matt Lattanzi (Richard Brancatisano) is also treated as a classic case of a man feeling intimidated by a powerful women. (“Look at you,” he says. “You even do cancer better than anyone else.”)

But if you can look past the stilted acting and on-the-nose dialogue (this is a Lifetime movie, after all), “Hopelessly Devoted” tastefully avoids exploiting Newton-John’s tragedies and romances, unlike many of the network’s other ill-received biopics on figures including Aaliyah and Brittany Murphy.

“What’s the point of all this media attention if I can’t (use) it to some advantage?” she wonders aloud in the film’s final minutes, illustrating her desire to support and fund cancer research. (She opened her namesake treatment center in her hometown Melbourne in 2013.) 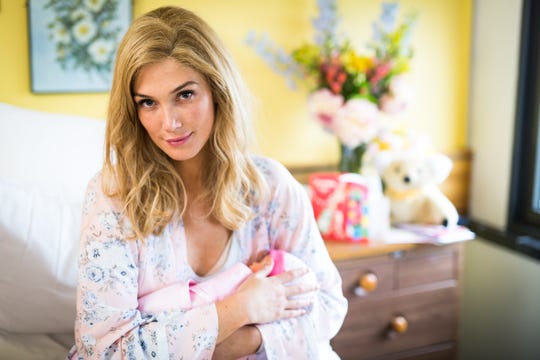 An hourlong documentary, “Biography: Olivia Newton-John,” airs immediately after the movie, and is similarly respectful of the four-time Grammy winner.

“As she battles cancer for a third time, Olivia continues to face the future with bravery and determination,” it begins in voice-over. The documentary covers her career to date but features no new interviews, instead recycling clips of Newton-John speaking about her illness.

“I’m not going to be one of those statistics. I’m going to be fine,” an upbeat Newton-John told “Today” in 2017. “I think that you can live with cancer like you can live with other things, if you take care of yourself. … It taught me I’m stronger than I thought I was. I think most people that go through cancer find that out about themselves.”