Nick Cannon has had enough.

The comedian took to Instagram to wish everyone a “happy BLACKFACE history month” and called out the two late-night Jimmys (Fallon and Kimmel) and Sarah Silverman along with Gucci, Prada and Moncler for using blackface.

Cannon uploaded a collage of the comedians photographed wearing blackface and then posted videos of both Kimmel and Fallon performing in blackface.

On an episode of “The Sarah Silverman Program” in 2007, Silverman wore blackface. The comedian later apologized for it, telling GQ last year she was “horrified” by the sketch. 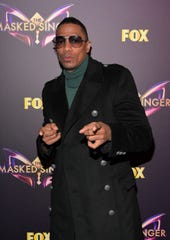 Nick Cannon is calling out comedians and fashion companies for their use of blackface. (Photo11: Charley Gallay/FilmMagic)

Kimmel, meanwhile, had a recurring skit on “The Man Show”which ran from 1999 to 2004, where he covered himself in dark makeup and dressed up as Utah Jazz player Karl Malone. The talk show host also dressed up as Oprah Winfrey on the series.

Videos of past “Man Show” segments resurfaced last year, and were highlighted during Kimmel’s feud with Fox News host Sean Hannity, but Kimmel avoided speaking about the topic.

And on a “Saturday Night Live” episode in 2000, according to The Root, Fallon wore blackface to impersonate comedian Chris Rock and made jokes about crack.

USA TODAY has reached out to reps for Silverman, Kimmel and Fallon for comment.

Cannon asked of Fallon and Kimmel: “Are these your kings of late night?” and he made sure to tag their Instagram handles in one of his posts.

“You know I’m always on the side of the comedian and never pander to the sensitive, but I feel there needs to be some ‘truth & reconciliation’ discussions and teachable moments amongst our communities,” Cannon wrote.

The “Wild ‘n Out” host also posted an old photo of himself dressed up in “whiteface” for his 2014 “White People Party Music” album.

The rapper went on to explain the damaging effects of these racist tropes and how blackface serves as a reminder to people of color that they’re “second class citizens.”

Cannon also called out Prada, Gucci and Moncler for their using blackface in designs.

“These recent revealings of people painting themselves black or brown and speaking in broken slang in an attempt to be humorous or have fun; as if our culture is some sort of party trick or costume is unacceptable,” Cannon wrote. “Along with @Gucci @Prada@Moncler and any other companies or corporations who wish to exploit our pain. Racism is when an ‘elite’ group uses its systemic power to enforce harm, hardship, and pain on others.”

More: Blackface, explained: Why Ralph Northam, Mark Herring and others darkening their faces is such a big deal