The Mars rover Opportunity is dead after a record-setting 15-year run, but its memory – and scientific discoveries – live on.

NASA announced Wednesday that the Mars rover was deemed dead after it hadn’t communicated in more than eight months.

Opportunity, along with twin Spirit, had unprecedented success and contributed greatly to scientific understand of the red planet, NASA said.

“We’re celebrating with emotion. Science is an emotional affair,” said Thomas Zurbuchen, associate administrator of NASA’s Science Mission Directorate. “It’s a team sport, and that’s what we’re celebrating today. I will never forget the amazing work that happened here. It transformed our understanding of our planet.’’

To remember Opportunity, here are some of its greatest moments and discoveries: 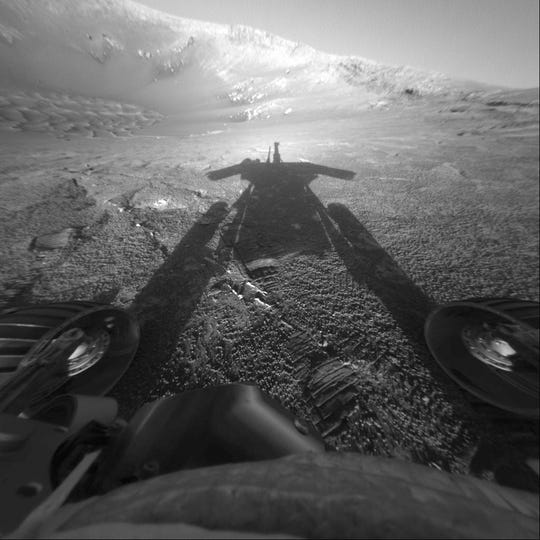 This July 26, 2004 photo made available by NASA shows the shadow of the Mars Exploration Rover Opportunity as it traveled farther into Endurance Crater in the Meridiani Planum region of Mars. (Photo: AP)

Opportunity was instrumental in helping determine that Mars once had liquid water and could have been able to support microbial life. NASA said Opportunity hit a “hole in one” when it first landed in a crater and found the mineral hematite.

Oppy proved beyond a doubt that ancient Mars had lots of liquid water. These hematite spheres, nicknamed “blueberries,” formed in the presence of H2O. https://t.co/2kz6YLjRer#ThanksOppypic.twitter.com/L9yS0a7k1X

“Rocks near the Opportunity rover’s landing site … contained pearl-shaped rocks that formed in pre-existing wet sediments, as well as finely layered ripples, crossbeds, and niches where crystals once grew and were later redissolved,” NASA said.

In addition to the “blueberries,” Opportunity also made other key discoveries to support our understanding of water on Mars.

The rover had a “slam-dunk” discovery when it spotted bright mineral veins that likely formed from flowing water underground. It discovered the mineral jarosite, too, which forms in the presence of acidic water, NASA says.

Opportunity had to traverse the inhospitable, sandy Mars terrain and faced great adversity in the process.

After it first landed, Opportunity struggled to drive out of Eagle Crater, NASA said. The team behind the rover also had to strategically plan how to get out of Endurance Crater, with up to 31-degree slopes, as well as “Purgatory Dune,” which took five weeks of planning and driving, NASA said.

The rover even escaped “Purgatory.” (Purgatory Dune that is.) https://t.co/gc3tBDsOB8#ThanksOppypic.twitter.com/qA5SEEjH5g

Opportunity and Spirit originally had their mission planned for 90 days, but the duo far exceeded the goal. Spirit was ruled dead in 2011, a year after it got stuck in sand and stopped communicating.

But Opportunity kept roaming, and in doing so, set the record for off-Earth roving distance at 28.06 miles. Spirit traveled a distance of roughly 4.78 miles. China’s Yutu 2 on the moon and NASA’s Curiosity on Mars could beat Opportunity’s record, though.

While Opportunity contributed greatly to scientific understanding of Mars and its geology and climate, many knew the rover for its iconic selfies and photos.

To the robot who turned 90 days into 15 years of exploration:

You were, and are, the Opportunity of a lifetime.

Opportunity revealed the beauty of Mars, from blue sunrise, to blue sunset. https://t.co/WAx9pdrys5#ThanksOppypic.twitter.com/7ehbQkZRKf

Bride wears her wedding dress while traveling the world