LOS ANGELES — You don’t have to pay to stream thousands of movies and TV shows online.

You can cut the cord, ditch the ever growing monthly cable bill (Comcast and Spectrum recently jacked up rates) and get access to a growing world of entertainment beyond the usual players like Netflix, Hulu and Amazon Prime.

But there’s one catch: you have to accept the bargain viewers have made with their TVs since the 1950s — sitting through ads. No fast-forwarding allowed.

Netflix recently raised rates on its plans and Hulu made pricing changes that included an increase of its monthly service.

Additionally, several new subscription services are in the wings for 2019 and 2020, from Apple, Disney, NBC/Universal and Warner Media, inviting the public to fork over another $10 or so  monthly to watch. 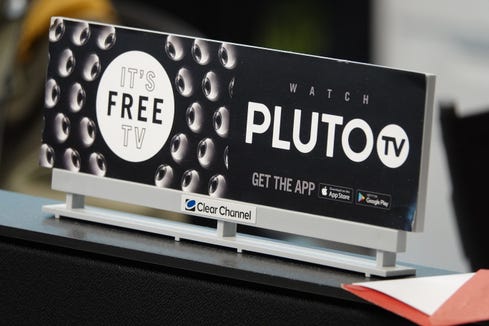 A Pluto.TV billboard points out that programming is free with the app (Photo: Jefferson Graham)

“There are only so many subscriptions people will pay for,” says Pluto TV CEO Tom Ryan. Pluto was purchased by media giant Viacom in January for $340 million. Viacom, which owns Nickelodeon, Comedy Central and MTV, says it plans to add Viacom programming to the Pluto mix.

Ad-supported streaming has its pros and cons. The bonus starts with getting free access content you may have forgotten about. The minus, for some, could be that the programming tends to be older. Many movies date back to 2011 or so, TV series as far back as the 1960’s, like Bewitched and the Dick Van Dyke Show. But that hasn’t stopped Pluto, the most popular of the channels, from attracting 12 million monthly active users. “That’s huge,” says Mike Vorhaus, an independent analyst with Vorhaus Advisors. “That’s on par with a cable channel.”

To access the channels, download the apps for smartphone and tablet viewing, or just go to their website on your computer. Many also have “apps” for TV viewing via streaming players from Amazon or Roku. Additionally, channels like Pluto and Xumo have dedicated channels on smart TVs from Vizio, LG and others.

For Pluto and Xumo, the goal is to make the service feel like a live TV, despite being on streaming, where viewers expect to see a bunch of thumbnails showing what’s available.

Pluto has multiple channels devoted to movie genres (horror, comedy, etc.) where something is always playing (and also available on demand if you prefer to watch from beginning) and multiple news channels including CBS, NBC, Bloomberg and Cheddar.

Xumo has fewer live channels–only news, along with seemingly never-ending clips and shows on channels from familiar names like the Today Show, America’s Funniest Home Videos and Family Feud.

What it means for you: Here’s what Viacom’s purchase of Pluto TV will mean for cord cutters

How-to help: Is cutting the cord on your mind? Here’s what you need to know

Pluto.TV CEO Tom Ryan and a collection of channels that appear on the free streaming service (Photo: Jefferson Graham)

The Roku Channel, an outgrowth of the popular streaming player device, is also available on the web and through rival streaming players that have an internet browser (like Amazon Fire Stick.) It, too, has older movies and TV shows, and live programming from ABC News, Cheddar, Yahoo News and TMZ.

Tubi and Sony Crackle don’t offer live, but instead a mix of older movies and TV shows. Crackle, as it’s owned by a movie studio, has more familiar fare, touting films like “Whiplash,” from 2014, “The Bourne Affair,” with Matt Damon (2002), originals like “Rob Riggle’s Ski Master Academy,” and TV shows like “The Steve Harvey Show,” and “Married…with Children”

Tubi says it has no interest in live programming. “The future of TV is on demand,” says Tubi CEO Farhad Massoudi.  “There’s a reason Netflix doesn’t have linear programming. Our focus is free video on demand, period.”

When Netflix, Amazon Prime and Hulu are focusing on high-profile originals, that means there are fewer library movie titles to see on those services, which puts sites like Tubi in a great position to attract more viewers, says Massoudi.

How popular is cord-cutting?

According to market researcher eMarketer, some 33 million people have already cut the cord, and it expects the number to grow to 55.1 million by 2022.

Vorhaus says most people subscribe to the odd number of 2.3 subscription services, and they would be likely to add just one more in the coming year or two.

At the same time, traditional TV viewership will fall by 20 percent in the next five years, he says, with mostly younger people dropping out.

“When I ask them why cut the cord, getting rid of commercials isn’t the first or second choice, it’s that they don’t want to pay for cable,” he says. “And that they can get a ton of stuff to watch on Netflix and Hulu. So for heavy viewers, the ad-supported services are in a great position, because they attract these types of people to watch as well.”

Luke Bouma, the editor of the Cordcutternews.com, a website devoted to streaming, says many of his readers hate ads, but they’re willing to put up with them.

“There are many who won’t watch anything with ads, but more who are happy to sit through them if they can get programming for free.”

With Netflix’s most popular offering now $2 more monthly and Hulu’s top tier up $5, premium streaming is starting to resemble the cable bundle that viewers looked to ditch, says Peter Csathy, the chairman of CREATV Media, an industry consultancy.

“Something has to give,” he says. “A counter programming strategy of free programming is smart.”