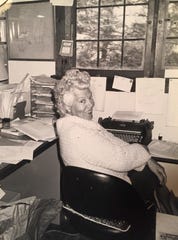 This 1980 photo provided by Kathy Ballantine shows her grandmother Betty Ballantine. Betty Ballantine, half of a groundbreaking husband-and-wife publishing team that helped invent the modern paperback and vastly expand the market for science fiction and other genres through such blockbusters as “The Hobbit” and “Fahrenheit 451,” died Tuesday, Feb. 12, 2019, at her home in Bearsville, N.Y. She was 99. (Photo: Richard Ballantine/Courtesy of Kathy Ballantine via AP)

NEW YORK – Betty Ballantine, the younger half of a groundbreaking husband-and-wife publishing team that helped invent the modern paperback and vastly expand the market for science fiction and other genres through such blockbusters as “The Hobbit” and “Fahrenheit 451,” has died.

Ballantine died Tuesday at her home in Bearsville, New York, granddaughter Katharyn Ballantine told The Associated Press. She was 99 and had been in declining health.

Ballantine was just 20 and attending school in England in 1939 when she met and married 23-year-old Ian Ballantine, an American at the London School of Economics. Using a $500 wedding gift from Betty’s father, the Ballantines started out as importers of Penguin paperbacks from England and founded two enduring imprints: Bantam Books and Ballantine Books.

Paperbacks had existed in the U.S. since Colonial times, but in the 1930s were limited mostly to poorly made “pulp” novels. The Ballantines took advantage of new technology in production and distribution and of a clause in copyright law discovered by Ian that waived fees on books from Britain, where quality paperbacks were much easier to find. Ian Ballantine vowed to “change the reading habits of America.”

Charging as little as a quarter, they published everything from reprints of Mark Twain novels to paperbacks of contemporary best-sellers. They helped established the paperback market for science fiction, Westerns and other genres, releasing original works and reprints by J.R.R. Tolkien, Arthur C. Clarke and H.P. Lovecraft, among others. They made their books available in drugstores, railroad stations and other non-traditional outlets. They issued some paperbacks simultaneously with the hardcover, instead of waiting several months or longer.

Their most lucrative publications came in the 1950s and ’60s, when they were running Ballantine Books. Ballantine editor Stanley Kauffmann, who later became the film critic for The New Republic, acquired “Fahrenheit 451,” Ray Bradbury’s dystopian classic that came out in 1953.

Years later, a switchboard operator at Ballantine had been reading a hardcover edition of Tolkien’s “The Hobbit” and recommended it to the Ballantines. They offered Tolkien’s publisher, Houghton Mifflin, $2,500 each for paperback rights to “The Hobbit” and the three “Lord of the Rings” novels. Houghton Mifflin initially declined, but reconsidered when pirated editions of the books began appearing. Rights were granted to Ballantine, which included a warning on the books’ covers that Tolkien would not receive royalties from purchases of unauthorized copies.

“The whole science fiction fraternity got behind the book; this was their meat and drink,” Betty Ballantine recalled, according to Al Silverman’s “The Time of Their Lives,” a publishing history which came out in 2008.

The Ballantines sold their company in the late 1960s, and Ballantine and Bantam are now part of Penguin Random House, where both Ballantines ending up working. Betty Ballantine’s projects included editing Shirley MacLaine’s best-selling “Out On a Limb” and writing a fantasy novel, “The Secret Oceans,” published in 1994. The Ballantines received numerous honorary awards and were voted into the Science Fiction Hall of Fame in 2008.

Ian Ballantine died in 1995. Their son, Richard Ballantine, was a popular cycling writer and enthusiast who died in 2013. The Ballantines had three grandchildren.

Betty Ballantine, the daughter of a British colonial officer, was born Elizabeth Jones in India in 1919. She remembered being taught to read by her father at age 3 and was so absorbed by Charles Dickens and other authors that she would acknowledge having a hard time understanding that the characters in their books weren’t real. Ian Ballantine was the cousin of one of her classmates in England.

Soon after marrying, Ian and Betty traveled by ship back to his native New York. They established the U.S. division of Penguin Books, and worked out of their apartment. In 1945, they founded Bantam Books, then part of Grosset & Dunlap, and went into business for themselves seven years later with Ballantine Books.

One memorable Ballantine release was inspired by a hoax. In 1956, nighttime radio personality Jean Shepherd was telling listeners that they should ask for a new novel called “I, Libertine,” by Frederick R. Ewing. Best-sellers at the time were based in part on requests at bookstores and demand was so high that “I, Libertine” appeared on some lists.

But, as Shepherd’s fans knew, and the public only later found out, neither book nor author existed. So Ian Ballantine convinced a friend, science fiction writer Theodore Sturgeon, to write — and write quickly — an actual “I, Libertine.” Shepherd, who provided the book’s outline, recalled years later that Sturgeon worked so hard he fell asleep before he finished the manuscript. Betty Ballantine stepped in, handled the last chapter and “I, Libertine” became a legitimate hit.