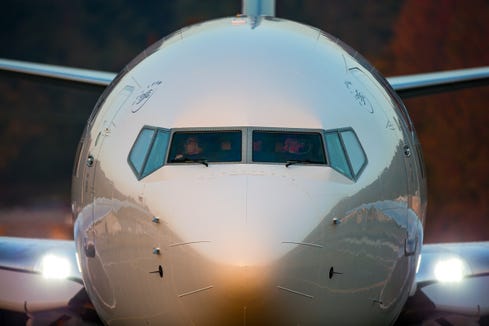 This file photo from October 2018 shows a Boeing 737-800 after it completed a test flight at Seattle’s Boeing Field. (Photo: Jeremy Dwyer-Lindgren, special to USA TODAY)

Flight schedules appeared to be on the rebound Wednesday after widespread weather delays a day earlier.

Nationwide, about 600 flights had been canceled and another 2,120 delayed as of 1:10 p.m. ET, according to flight-tracking service FlightAware.

Many of Wednesday’s cancellations were made preemptively Tuesday, when a large storm system brought snow, ice and heavy rain from the Midwest to the East Coast.

The day was a messy one for air travel, with more than 2,560 cancellations and another 6,300 delays. Dozens of major airports, including the New York City, Chicago, Boston and Washington airports, saw major schedule disruptions Tuesday. Problems also lingered in Seattle, where delays and cancellations persisted in the wake of one of the biggest snow storms to hit in years.

For Wednesday, there were fewer major travel trouble spots, though airline change-fee waivers remained in place for a number of East Coast airports.

FlightAware counted of dozens of cancellations at the three big New York City-area airports (LaGuardia, JFK and Newark, New Jersey), but the disruptions were not severe. It was a similar story for airports like Boston, Philadelphia, Washington Reagan National and Baltimore/Washington; each had numerous cancellations early Wednesday, but – overall – schedules appeared to be improving after the messy Tuesday.

Lingering cancellations were reported Wednesday morning in Seattle, where about three dozen flights had been axed as of 6:40 a.m. ET (3:40 a.m. local time). That accounted for about 3 percent of the entire day’s schedule there.

One new trouble spot on Wednesday could be San Francisco, where a storm moving off the coast could create off-and-on delays and cancellations. United, which operates a hub there, was waiving change fees for flights through San Francisco on Wednesday.

Instagram influencer rates and rich YouTubers: How they make money