The Los Angeles Lakers wanted to acquire Anthony Davis in a trade with the New Orleans Pelicans.

But no matter what the Lakers offered, it wasn’t good enough for the Pelicans, and when asked if the negotiations were in good faith, Lakers President Magic Johnson said, “No.”

Johnson addressed reporters before the Lakers played a road game against the Philadelphia 76ers on Sunday. The Pelicans didn’t move Davis before Thursday’s trade deadline, preferring to wait until the summer before dealing him.

“Basically, at the end of the day what happened happened, and we knew that when we first started,” Johnson said. “Hey, it is what it is.”

Johnson also said the Lakers’ plans this summer have not changed just because they didn’t acquire Davis for the rest of this season. 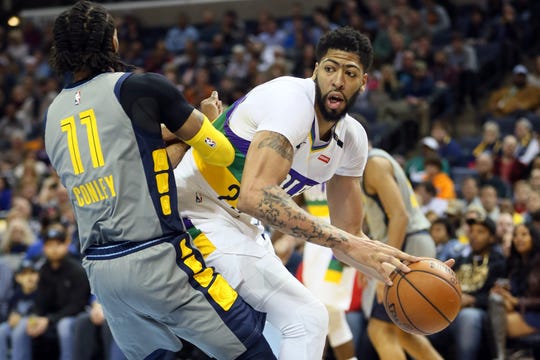 “It’s a great class (of free agents), and we just want to get one of them,” Johnson said.

The Lakers’ pursuit of Davis has become a sensitive topic for the NBA, the Pelicans and the Lakers with theories that the Pelicans refused to trade Davis to the Lakers just to disrupt chemistry inside the Los Angeles locker room because so many of their young players were discussed as trade pieces.

“Quit making this about thinking these guys are babies because that’s what you’re treating them like,” Johnson said. “They’re professionals. All of them. And this is how this league works. They know it. I know it. That’s how it goes. So, we’ve got to move forward, and we are moving forward. …

“There’s a good side of the business that we get paid to be professional basketball players. Then, there’s deals like this.”

Johnson had no sympathy for Lakers players such as Brandon Ingram, Lonzo Ball and Kyle Kuzma who were mentioned in trade talks.

“We get paid to do a job,” Johnson said. “We’re all professionals. I’ve been in this league for 40 years. A lot of players got traded on Thursday and Wednesday. Guess what’s going to happen next year? A lot of players are going to get traded. Some players will stay home. I talked to our guys. They’re in a good place. That’s all that matters.

“We’re headed toward hopefully getting into the playoffs. That’s a part of it. … We’ve got young guys. They’re going to be affected by it. That’s the nature of our business. … “I’m not the guy who, ‘Oh, I’m going to up and hug guys.’ I’m not that dude. And they’re ready to go, so let’s not belabor that point, like all of a sudden everybody’s upset over maybe being traded, maybe not.”

Two weeks ago, Davis’ agent, Rich Paul of Klutch Sports, informed the Pelicans that his client will not sign an extension with the team and wanted a trade. Paul also told ESPN the same thing on the record, resulting in a $50,000 fine for Davis “for violating a collectively bargained rule prohibiting players or their representatives from making public trade demands.”

Paul also represents Lakers star LeBron James, who earlier this season said it would “amazing” and “incredible” to play alongside Davis. Shortly after those comments, the league sent team executives a memo reminding them of the league’s tampering policy.

In a statement shortly after Davis’ trade request became public, the Pelicans released a statement, saying, “We will do this on our terms and our timeline. One that makes the most sense for our team and it will not be dictated by those outside of our organization. We have also requested the League to strictly enforce the tampering rules associated with this transaction.”

Blackface shows how deeply rooted antiblack racism is in America