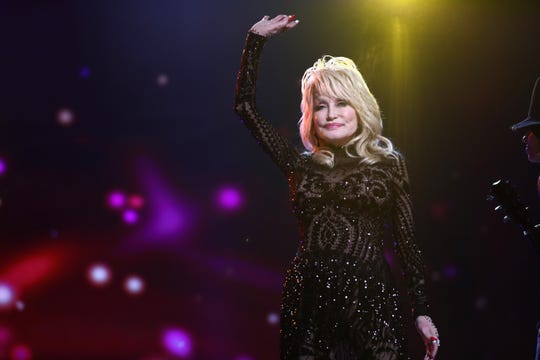 LOS ANGELES — An iconic speech from an iconic performer.

In a feisty six-minute address, Dolly Parton reminded the audience at Friday night’s MusiCares’ Person of the Year event why she was the 2019 recipient — not just because of her philanthropy, which the Grammys’ MusiCares charity honors with the award, but also because of her fiercely comedic personality.

As part of her wide-ranging speech, the 73-year-old singer thanked the show’s featured artists — including Miley Cyrus, Katy Perry, Kacey Musgraves, Chris Stapleton — for performing their own takes on her songs, comparing the night to a different kind of intimate experience.

“At my age, you take anything you can get,” she cracked.

Earlier in her speech, Parton acknowledged that she was the first country star to receive the Person of the Year distinction, joking about all the rockers who had been honored before her.

“I truly am honored to be the MusiCares Person of the Year, and the first country artist to be honored. That’s right — because you know, we hillbillies, we need music-care too!” she said. “We may not have sex, drugs and rock ‘n’ roll, but two out of the three ain’t bad.”

“But I really am feeling the love in this house tonight. Either that, or my telephone’s on vibrate.”