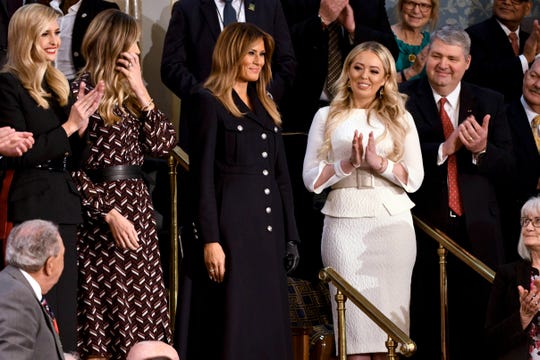 First lady Melania Trump, who hasn’t been seen in public for an official engagement since just after Christmas, returned to the spotlight Tuesday night for the State of the Union speech – and for a second year in a row she took a separate car to the Capitol.

The first lady left the White House early and ahead of President Donald Trump after hosting a reception in the Diplomatic Room for their special guests invited to sit with her in the House gallery during the speech.

Trump also traveled separately to the Capitol last year so she could spend more time with the guests. And, as she did last year, she also hosted another meet-and-greet with them at the Capitol.

“Mrs. Trump knows this is an important night, and wants to ensure the experience of her guests is special, and that they feel comfortable,” spokeswoman Stephanie Grisham told CNN.

Trump wore an inky military-style dress, a stark contrast to the many female Democratic lawmakers who wore white in honor of women’s suffrage.

The Trumps invited a dozen special guests, including Alice Johnson, the prison inmate who was granted clemency by President Donald Trump at the urging of Kim Kardashian.

Also invited, in keeping with her low-key anti-bullying campaign: Joshua Trump, a sixth grader from Wilmington, Delaware, who is no relation to the Trump family but has been bullied in school because of his last name, according to the White House.

More: A boy named Trump is honored for courage in face of bullying

Other guests, as per usual, were invited to illustrate some aspect of the administration’s policies, including relatives of a couple murdered in their Reno, Nevada, home, allegedly by an illegal immigrant.

Last year, Washington eyebrows lifted because first ladies usually accompany their husbands to the speech. Plus, the episode followed news that the president had paid hush money to keep adult film star Stormy Daniels from talking publicly during the 2016 campaign about her one-night stand with him years ago.

But Trump has been an atypical first lady from the start; it may be she’s starting her own custom of being extra-attentive to the administration’s SOTU guests.

The first lady has been mostly out of sight since late December, and popping up in the news only after the British conservative paper The Telegraph apologized and agreed to pay her “substantial damages” after retracting a story she claimed contained false statements about her family and her modeling career.

It was the third time that the first lady has successfully sued publications or online blogs over content she considered defamatory.

“FLOTUS often refers to opportunists out to advance themselves by disparaging her name&image. Mrs.Trump will not let people&media outlets make up lies&false assertions in a race for ratings or to sell tabloid headlines,” Grisham tweeted about the Telegraph, which is not a tabloid but a prestige broadsheet aligned with the conservative British Tories.

.@FLOTUS often refers to opportunists out to advance themselves by disparaging her name&image. Mrs.Trump will not let people&media outlets make up lies&false assertions in a race for ratings or to sell tabloid headlines. Cc @NinaBurleigh / Simon&Schusterhttps://t.co/bVOnyZpk7w

It was also the second time the first lady disappeared for weeks from the glare of media cameras: Last year, she was out of sight from May 19 to June 3, after she spent five days in the hospital for a kidney embolization.

The last time FLOTUS was seen on the job was Dec. 27, when she and President Trump returned late at night from their surprise trip to visit troops at Al Asad Air Base in Iraq.

After that, she and son Barron, 12, went to Mar-a-Lago, the Trump resort in Palm Beach, Florida, for the New Year holiday while the president remained in Washington during the government shutdown, which had begun Dec. 22.

She was next seen on Twitter at the annual New Year’s Eve party at Mar-a-Lago, dressed in a slinky, sparkly black Stella McCartney gown.

But she didn’t pose for any official photos; the picture was posted on social media by guests at the $1,000-per-person party.

Instead, Trump posted a rare selfie, a close-up picture of herself with Happy New Year greetings, on her Twitter account.

Trump had no official appearances scheduled during the shutdown; Grisham, who was one of only a handful of her tiny staff who were working during the shutdown, said she spent most of the winter holiday in Florida with her son, returning occasionally to the White House to be with the president.

She returned to Mar-a-Lago on Jan. 17, reported the Miami Herald, flying to Florida in an Air Force plane even after the president grounded military aircraft that House Speaker Nancy Pelosi and a Congressional delegation were to use to visit troops in Afghanistan.

The first lady was next seen on Feb. 1, after the shutdown was temporarily resolved, when she and her husband and son flew back to sunny Palm Beach from frigid Washington to spend Super Bowl Weekend there.

She wore a caramel Roksandra coat and carried a red Hermes bag as she boarded Air Force One.

She and the president were seen briefly on Sunday when they watched the Florida Atlantic University Marching Band and cheerleaders play and perform at Trump International Golf Club in West Palm Beach, Florida, before the annual Super Bowl party at the resort.

She was wearing a red-and-white striped blouse and cropped black pants and high heels.

When they returned to the White House Sunday night, she was wearing a navy blue outfit of coat and cropped pants.

Trump wants to slash drug rebate deals. Will it make a difference?