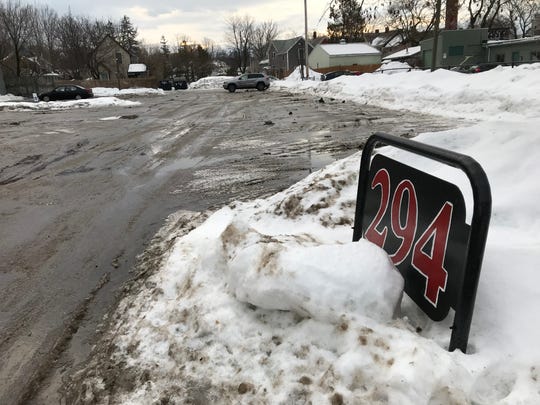 The parking lot entrance to 294 N. Winooski Ave. in Burlington on Monday morning of Feb. 4, 2019. A University of Vermont student was found unconscious at this location on Saturday and was declared dead at the scene. Police say sub-zero temperatures may have been a factor in the death. (Photo: EVAN WEISS/FREE PRESS)

BURLINGTON, Vt. – A college student found dead in the snow last weekend appeared to die from exposure to sub-zero temperatures, which was exacerbated by acute intoxication, according to Burlington police.

Burlington Police Deputy Chief Jon Murad said Gage left the University of Vermont campus earlier Friday night to go to a fraternity house where he met friends. There was not a party at the first frat. Murad said he is unsure whether the first fraternity is considered an official fraternity by the university.

Gage then left that gathering with several people to go to the second location, an unregistered fraternity at which there was a party.

Gage left the fraternity party around 12:45 a.m., and surveillance footage showed him about 20 minutes later entering the parking lot in which he was later found dead, police said.

“That surveillance footage shows Connor to be alone, inadequately dressed, and moving in ways consistent with intoxication and/or hypothermia,” the news release stated.

Police are unsure as to why Gage was alone or where he was trying to go when he ended up in the parking lot, Murad said. They suspect he may have been walking back to the first fraternity house to collect some belongings he had left there.

“To be frank, there are going to be elements of those questions that are never going to be answered,” Murad said.

Murad said he does not anticipate any criminal charges to be filed in the case.

“I wouldn’t be surprised if the university asks itself some questions about culture and the idea of having people take better care of each other,” Murad said.

Hypothermia occurs when a person’s body loses heat faster than the body can produce it. According to the Centers for Disease Control and Prevention, warning signs include uncontrollable shivering, shallow breathing, disorientation, slurred speech, drowsiness, clumsiness, and exhaustion.

“Because hypothermia can be characterized by confused thinking, it’s incumbent on friends to monitor each other and exercise care for one another when the warning signs listed above are observed,” police said.