The panel of eight women and four men deliberated for roughly three hours on the fate of the internationally notorious defendant accused of smuggling tons of drugs into the United States before retiring at about 4:15 p.m.

Jurors sent out several notes during deliberations, at one point asking a legal question about one of the charges against Guzmán and at another seeking additional copies of verdict sheets and legal instructions that U.S. District Judge Brian Cogan read them earlier in the day.

Guzmán, 61, is accused of smuggling tons of drugs into the United States as a leader of Mexico’s Sinaloa drug cartel.

He’s charged with 10 federal felony counts, including engaging in a continuing criminal enterprise, trafficking in cocaine and other narcotics, use of a firearm in connection with the alleged scheme and money laundering.

If found guilty of the criminal enterprise charge, he could be sentenced to life in prison. 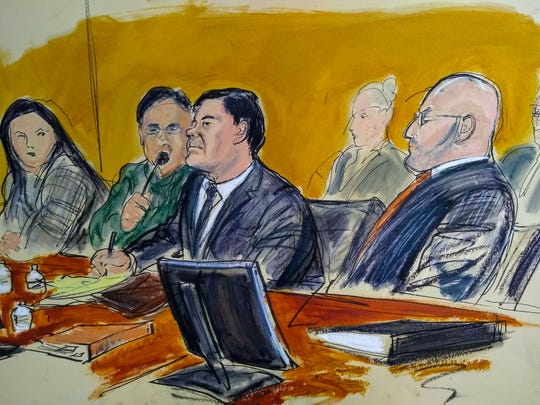 Guzmán, dressed in a dark suit and tie, displayed little emotion as the jurors left the courtroom. His wife, Emma Coronel Aispuro, a regular spectator through more than two months of testimony, was not present for the start of deliberations. However, she returned to the courthouse later in the afternoon.

Acting U.S. Attorney Matthew Whittaker made a surprise appearance in the courtroom immediately after the jurors retired. He thanked and shook hands with the federal prosecutors who presented the government’s case.

Earlier Monday, Cogan briefly delayed final instructions to the jury after defense lawyers asked him to question members of the panel about whether they had seen news reports about the case over the weekend.

The judge did not describe the reports in open court, but the questioning appeared to relate to coverage of newly filed court papers in which a witness claimed Guzmán had sex with girls as young as 13, drugged them, and referred to them as his “vitamins.”

Attorneys for Guzmán denied the allegations.

The judge questioned the jurors and then went ahead with final legal instructions.